“So he was kidnapped by black pillar.”

That’s as good an explanation of that movie as any other I have heard.

I bicycled in to work this morning.

It is a very nice ride. Flat and scenic along a regional trail that on many maps still claims to the the Southern Pacific Railroad. In fact, when I got to Danville there was a beautiful train station with a Southern Pacific caboose sitting out next to it. Museum of the San Ramon Valley, it said.

The trip, one way, if I were in slightly better shape, would be nearly an hour. I got out the door late so it was more like an hour and thirty minutes.

I am no Joe Gross, but then he’s not dannyman, so I figure all is fair.

As recently observed at work:

(16:19:06) taras: for centuries, my clan has insisted on only naming their children with names that can be typed exclusively with the left hand, b/c we knew that one day we might be working with a left-hand-typing-only system administrator

For those who have never seen me type, let me tell you that the above is an apt description of yours truly.

It’s good to be root.

So, I was reading, yet again, of the Army’s difficulty in signing up soldiers to serve in Afghanistan and Iraq, among other places. The article wound down with the reminder that this could be alleviated somewhat, by allowing openly gay people to serve. And I started to concoct this little fantasy where somebody in San Francisco started signing up gay men, who pledge that they would serve in the military if allowed to do so. The thing catches on to other places and before you know it, you’ve got thousands of gay men who have pledged to serve.

But that’s not enough, right? So, they form companies (in the military sense) and start to drill on weekends as if they were the National Guard. Once they’ve gotten good, they organize a march on Washington, and suddenly the Mall is filled with the Pink Triangle Battalion. Squads of big beefy gay dudes are drilling in formation, on the mall, marching around the White House, the Capitol, and over to the Pentagon and back. “The military needs men, and we are ready.” The ranks could be filled out with fully uniformed veterans, who may be either gay, or simply “straight but not narrow minded.”

Or, if they really wanted to make a point, some of them could bivouac (Army camping) in some of the more far flung, shitty desert places of Texas, known for rabid conservatism. You get a company of armed, uniformed soldiers with pink triangles marching through your remote Texas town and first you’re like, “Hey! A military parade!” and then “Pink triangles … these are faggots!?” and then “Are those real guns?” and then “What are they doing here in Texas scaring the shit out of me, they should go to Iraq!”

I recently had a need for two quick temperature conversion algorithms in a Perl script. I asked Google, but did not immediately get a great answer, so here’s my answer:

The regex is to untaint the input datum, and could be eliminated if you know that your variable is clean. This code has been incorporated into a systems health and data trend monitoring script for FreeBSD. For the vaguely interested, here’s today’s perldoc: END_OF_DOCUMENT_TOKEN_TO_BE_REPLACED

A while back, I signed a petition for the American Family Association to oppose Ford’s support of gay people. I didn’t do this because I agree with them, but as a subversive act to put obviously bogus names on their petition. The idea being that if anyone ever reviewed their anti-gay petition, they would see that “Jesus McChrist” was definitely opposed to Ford’s gay ways.

Every time I see this e-mail, I get a little chuckle: END_OF_DOCUMENT_TOKEN_TO_BE_REPLACED

Joe told me he made a deliberate effort to stop reading political blogs, and I said that I never really did bother to read political blogs, because they generally don’t go past provoking self-righteous outrage at the other side, and since about 2003 or so I have definitely had “outrage fatigue.”

But that doesn’t mean I still don’t pay attention, and that doesn’t mean that I am ignorant of the outrages. I get a trickle of the worst, usually from The New Yorker, and that’s when I feel compelled to re-tell the stories of the greatest outrage.

Amnesty International recently referred to Guantanamo and other prisons like it as “the gulag of our times” or words to that effect, and the Bush Administration and conservatives flipped out over that . . . (that outrage!) because really, our suspending the Geneva Conventions and inprisoning a classified number of people throughout the world based on classified intelligence without ever charging them with a crime is nothing at all like the Soviet gulag, where millions of Stalin’s own citizens were worked to their deaths.

And you know, they have a point, or maybe I was daydreaming about something else when I read the chapter in “A Day in the Life of Ivan Denisovich” that was similar to this passage, from Hendrik Hertzberg in The New Yorker, May 30, 2005: END_OF_DOCUMENT_TOKEN_TO_BE_REPLACED

And, today is pay day. For the first time in my life, I have a six months of rent in a savings account. I think we should probably keep adding to this stockpile, on the off chance that we some day discover some affordable housing to buy. I am also looking forward to getting back in to the 401k game.

Although I have not succeeded with the getting-hired-at-Google thing I have had my crack at it a few times and have survived to write about it. I occasionally hear from others about to try it, and they want to know if I have any advice. Here’s my modest wisdom on the subject of interviewing well at Google. END_OF_DOCUMENT_TOKEN_TO_BE_REPLACED 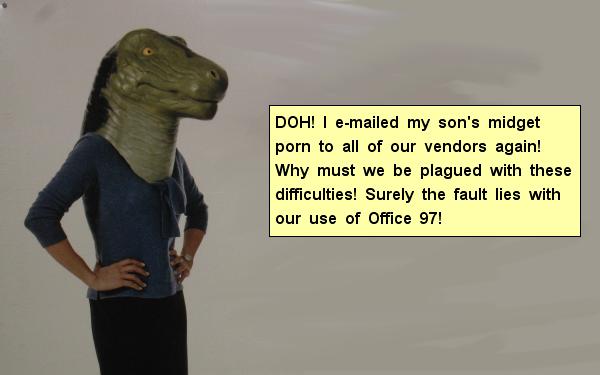 END_OF_DOCUMENT_TOKEN_TO_BE_REPLACED

So, say you are writing a shell script (sh or bash) that needs to take arguments like so:

This took me a bit of doing. END_OF_DOCUMENT_TOKEN_TO_BE_REPLACED

I never do them.

But, somehow, I was oddly attracted to these. (Thanks, Keith!)

Which OS are You?

Which File Extension are You?

<Adam> pickle.dump((self.dsId, dict((key, self.index[key].tolist()) for key in self.index)), open(path, ‘w’))
<Adam> Wow. Just when I was beginning to think that Guido’s plan to use structure-as-syntax was going to force nice readable structure on everyone, my hopes are dashed.
<meekay> People are still writing sh_tty code.
<Adam> And I deal with it!
<dman> That’s python?
<dman> I thought the whole point of Python was to make code like that impossible.
<Adam> Well, it’s the traditional “one in n lines of code contains a bug, so I’m going to reduce the number of lines in order to keep bugs out” thinking.
<Adam> Ironically, the kid who wrote that is my coworker who apparently had an offer from google and turned it down last year.
<meekay> I actually espouse that belief.
<meekay> Of course, if you get to the point where you’re writing obfuscated Perl in Java, you’re being counter-productive.
<Adam> I think, however, that a distinction needs to be made between “one in n operations contains a bug” and “one in n lines of code”.
<Adam> Packing more operations into one line just means that you’re making the bugs harder to untangle.
<Adam> And the code harder to parse for my poor little brain.
* Adam dumbass. Likes to stay that way.
<meekay> The pattern is not typically x bugs per n lines of code across the industry.
<meekay> It is typically a solid average x bugs per n lines of code per developer.
<meekay> And some developers have a lower x than others.
<dman> Adam: Greater bug density!
<meekay> I, for example, try to keep x very low.
<meekay> And by doing so, I am more productive.
<meekay> Because my coworkers bug queues typically have size five or six, and I typically have size two.
<dman> I think if the operation is a no-brainer, that stuff is okay, but you should reuse one of the lines you “saved” to drop a comment that will give the next sucker who has to maintain your code a friggin clue.
<meekay> Where “the next sucker” may in fact be you.
<meekay> =)
<meekay> I love it when my coworkers come and ask me about code that they wrote.
<dman> especially me, because i’m the SysAdmin, and when I start looking at the code, we’re already in trouble.

When Yayoi and I got married, we wanted to collect whatever wisdom our families had to offer on living together, translate it into English and Japanese, and have it available at the ceremony. That project kind of fell through, but we have some material and I want to keep it somewhere accessible. So, why not share with the Innernet? END_OF_DOCUMENT_TOKEN_TO_BE_REPLACED

The flag stands for our nation, and its values, including Freedom of Speech.

Our men are dying in Iraq, and our nation and our planet have far more serious problems than flag burning. Our nation is run by crooks who write laws to please whomever pays them the most. We are sacrificing our moral superiority by torturing people, many of whom turn out innocent, and Osama bin Laden is still on the lose, and you have the cojones to tell me it is illegal to be unpatriotic?

If the jingoistic idiots running our nation do manage to pull off that flag-burning amendment, I will only be able to conclude that our nation is in fact in deep sh_t, and the only adequate way to express that will be by burning the flag in public.

Unless I’m a big chicken.