I wanted to print an article from my web site, but the printing was ugly. I had previously tried to fix up my printing by adding some @media print stuff to my stylesheet, but I found it wasn’t working. Since I have free time, I spent a bunch of it researching the correct approach. Finally, I found a wordpress.org article: “Styling for Print”.

To specify a “print” stylesheet for WordPress: END_OF_DOCUMENT_TOKEN_TO_BE_REPLACED

If you enjoy listening to Internet-based radio stations like SOMA FM, please take a brief moment to lobby your legislators. The Internet Radio Equality Act needs co-sponsors in the Senate. The aim of the bill is to override a March decision by the Copyright Royalty Board, at the behest of the RIAA, to drastically increase the royalty fees for music streamed through the Internet.

What is really upsetting is that the $20 billion commercial radio industry is exempt from royalties! Meanwhile, over on the Internet:

The six largest Internet-only radio services anticipate combined revenue of only $37.5 million in 2006, but will pay a whopping 47% (or $17.6 million) in sound recording performance royalties under the new CRB ruling.

Since a lot of Internet broadcasters are small, independent operations with shallow pockets, it is feared that many will be forced to cease operations. There is substantial fear that this will bring the funky weird planet known as Internet Radio more towards the monotonous monopolistic drone usually heard on traditional commercial radio. I would rather that not happen, so I dropped the following missives on my Senators, Dianne Feinstein and Barbara Boxer, and I’ll share it here with you, too, in case you’d like to spend a few minutes to make the Internet a better place: END_OF_DOCUMENT_TOKEN_TO_BE_REPLACED

I have had my sleeves rolled up . . . and I am having a blast! It is with some joy that I announce the release of the latest development version of my WordPress Flickr plugin, Photos Flickr 0.5:

Photos Flickr is an early version of a plugin that I am developing for WordPress blog software to display a userâ€™s Flickr album within their blog. The result? Someone with a WordPress blog can now have a basic interface to let readers view their Flickr images, using their own web site and design.

I also managed, despite myself, to release this (arguably) on-time! Yay me!

I would rate this release as cool-but-underwhelming or, “shows promise” . . . 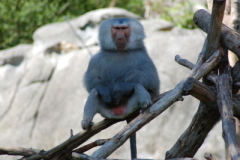 Male baboons may be the biggest voyeurs of the animal kingdom–they love to listen in on other baboons copulating. Researchers at a game reserve in Botswana found that low-status single males in a community of baboons often skulk around the love nests of higher-ranked males and their female consorts. While a female is in heat, she will often pair off with a high-status male and engage in sex multiple times during the day. The female’s love cries–long, song-like calls–draw a crowd of male baboons. If the couple fights, or if the male leaves her for even a minute, the other baboons will step in for a chance at a hookup. Researchers tested their theory by playing female sex calls over a loudspeaker. Male baboons from miles away literally dropped what they were doing to home in on the noise. “For male baboons, copulation calls are the most interesting vocalizations,” study author Catharine Crockford tells Discovery News. “From the calls, they hear about who is doing what with whom.”

Man, where to start? 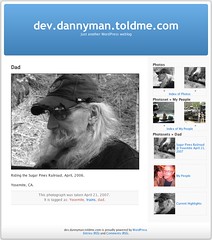 My WordPress plugin, Photos Flickr, now supports sets. I spent a little time crafting up a nice default template. I also set up a “demo blog” to give an online demonstration of the new default template.

I had planned to “ship” this version last Friday, but it was a little more adventure than I had anticipated.

Photos Flickr is an early version of a plugin that I am developing for WordPress blog software to display a userâ€™s Flickr album within their blog. The result? Someone with a WordPress blog can now have a basic interface to let readers view their Flickr images, using their own web site and design.

What is New? What Has Changed?

There is plenty more work to make this an awesome plugin. You can track plans and progress on my “projects” page.

I just spent a fair amount of time wrestling with Apache on my Macintosh. The problem is that it simply refused to read the .htaccess file in my user directory.

I took the “Unix Guy” approach and edited /etc/httpd/httpd.conf to ensure that Apache was configured to consult my user’s .htaccess file. I changed this bit:

Back in 2003, I remember being a house guest to a gracious host. He had some other guests over and one asked “is the water safe to drink?” This was a local yuppie asking about the tap water in Oakland, CA. The Bay Area has some of the best tap water in the nation. Even so, I had to resist the urge to point out that when I was in France I had treated a bout of homesickness by skimming the “Lonely Planet USA” guidebook, which explained that, in fact, tap water in the United States is safe to drink in 99.9% of localities, and that anywhere that the water isn’t safe to drink there will be plenty of warning signs: it is reasonable to assume that any American tap water is “safe”.

A few years later, my then-wife and I were guests at my Boss’ house, and dinner was served. Bottled water was made available at each place setting–nothing fancy, just standard, probably-from-Costco bottled water. In Washington, DC. I rationalized that the Boss’ wife is from India, where serving a meal with bottled water could merely be customary. No need to make an ass of myself by offering my own cultural critique of the Boss’ family’s hospitality.

I read that San Francisco recently enacted a ban on spending any further money for bottled water by city departments–currently the city spends $500,000/year on bottled water. This figure seems excessive and wasteful, but then, I read that Muni was a big spender, and I figured those guys out in the street or running vehicles don’t have easy access to tap water. It needn’t be trucked in from somewhere else–just, you know, water-in-a-bottle can be convenient, when you’re not near a tap . . .

I don’t know that you can buy municipal tap water in San Francisco or if you’ll have to bottle your own. I have a feeling that the ban will result in an increase in purchases of bottled soda and other beverages, for those cases where it isn’t a question of bottled versus tap water, but beverage-in-a-bottle versus access-to-a-tap. 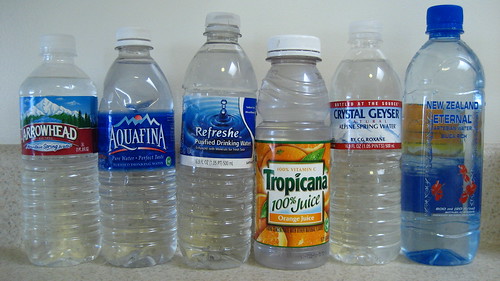 For me, the most valuable aspect of bottled water is the water bottles, which can be refilled and reused to deliver fresh, delicious tap water whenever you like. These bottles are rugged and last for years of normal use.

My favorite is the “New Zealand Eternal”–I snagged this during a job interview. On the one hand, bottling water in New Zealand and transporting it to North America is–frankly–immoral. On the other hand, since it is so flamboyantly wrong, they supply the nicest bottle!

The “Tropicana” bottle is pretty rugged and has a nice, wide mouth. There is also no ambiguity–if you see me drinking water from a Tropicana bottle then its pretty clear this is some home-refill job, and I’m not some asshole who has to maintain the purity of his bodily fluids by importing water from New Zealand!

Too Close for Comfort

Copied without permission from the Readers Write section of “The Sun” May, 2007.

The theme was “Too Close for Comfort”.

NOT ONE WOMAN LOOKS UP WHEN I walk into the breast-cancer clinic and sit down. We are invisible to one another as we anxiously anticipate placing our bare breasts between the cold metal plates of the mammogram machine.

Before leaving home, I placed a rosary in my pocket. Now, I secretly move my thumb and forefinger from one royal blue bead to the next. Some of the women appear to be reading magazines, but I can tell by the way they turn the pages that it is only to give the impression of doing something. Next to me, a pretty, thirtyish woman talks nonstop on her cellphone, her body turned away to muffle her conversation.

When it’s my turn, I enter the dressing room as instructed, take off my clothes from the waist up, remove my deodorant with the wipe provided, and put on a pink gown. Then I wait in the second holding area until I am called behind door number two.

I always wonder if the technician (who says little and smiles even less) ever tires of looking at breasts. She expertly takes four frames, two of the right breast and two of the left, then tells me to return to the waiting room and not to get dressed until I am given permission. If some abnormality is discovered, more pictures will have to be taken. All of us waiting women long to hear the same five words: You may get dressed now.

After I am finally given permission to leave, I exit past the young woman on the cellphone, who is the last one still waiting at 6:30. She rocks forward and back, cupping her forehead in the palm of her hand, taking no notice of me. As I rush past her, relieved to be cleared for another year, my hand slips into my pocket and closes around the rosary. My fingers trace the cross, and I ask the Lord to have mercy on this woman.

Back on the street, I feel hungry. At the bottom of my purse I find a small dark chocolate that I packed this morning — in case of an “emergency.”

I hurry back to the waiting room, tap the woman on the shoulder, and hand her the chocolate. Her cheeks are wet, but she smiles

BUG: Uhm, actually, if you have pretty permalinks this plugin will break unless your post slug is photos . . . I just tried to fix this but failed. Sorry about that.

What is New? What has Changed?

There is plenty more work to make this an awesome plugin. You can track plans and progress on my “projects” page.

I received an e-mail: 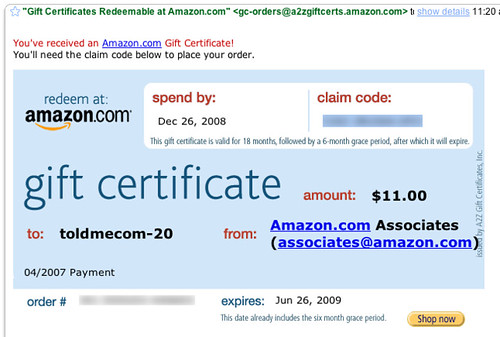 As I noted on Flickr: I just received my first "payment" for carrying Amazon.com advertising on my web site. Neat! This is hardly “f_ck you” money, but it is greater than zero.

For the record, I have been with Google AdSense for over a year now. That service brings in enough to cover the costs of my home DSL and then a wee bit more. Thanks to the generosity of friends, the hosting costs of my web site are nil, but I could probably cover that with revenue.

Of course, I am operationally “cash flow positive” but no financial incentive for content, just yet. No incentive beyond rhetorical diarrhea. :)

Pie-in-the-sky, my web site receives around 10,000 unique visits per month. I could probably “monetize” that better, but as I like to say, if I had 200 times more traffic, I could cover all of my living expenses.