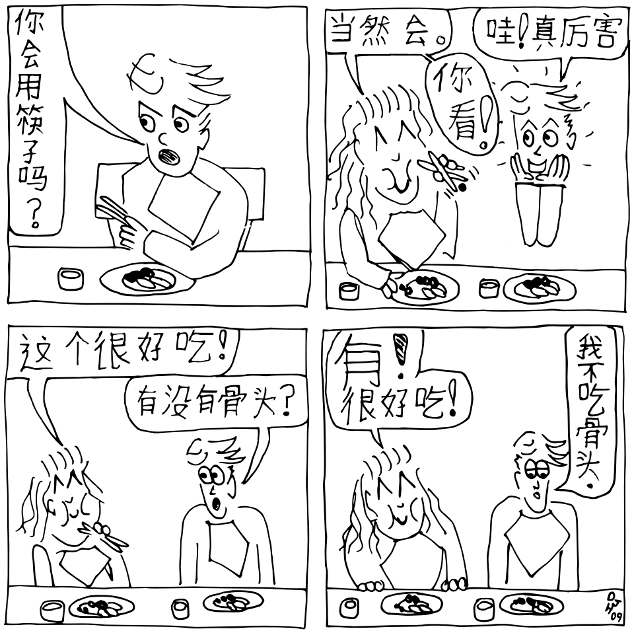 Dialogue from two ChinesePod lessons: Can You Use Chopsticks? and Does it Have Bones?

Yeah, it has been awhile. This time through, éª¨å¤´ threw me for a bit of a loop because the character rendered differently in a certain font. According to my dictionary, éª¨ is a compound of a skull-with-vertebrae (å†Ž) over flesh (è‚‰) though the bottom particle is drawn as a moon (æœˆ) except in one font it came out with the skull facing right, and the two horizontal strokes in the moon slanted downward in opposite directions to better resemble flesh. This appears to be question of style.

The other thing I did is after scanning the drawing I ran the scan through the Potrace bitmap tracing engine in Inkscape, which converted the lines to a vector graphic, smoothing things out somewhat.

Seriously, WikiWords are the dumbest idea for marking a link to a document node. But when you generate HTML that looks like this, you are doing it wrong:

I mean, that just means that you have gone batshit insane.

Anyway, back to learning how to parse information from HTML documents using Python . . .

To make up for my snarkiness in my last post . . . it is an easy matter of fetching the WebRss node from Twiki and running it through the Universal Feed Parser:

The best video footage I have been able to find is from John Simpson with the BBC. The government is cracking down hard, beating people in the streets, and blocking communication, but all the same, people are spontaneously gathering in the streets and fighting back. There are stories and even video of police riding motorcycles in to scare crowds, who then turn on the motorcycles and leave them burning in the streets. As John Simpson points out, Iranians have since upped the ante and are driving their cars to block the streets: it is harder for riot police to thrash you that way. 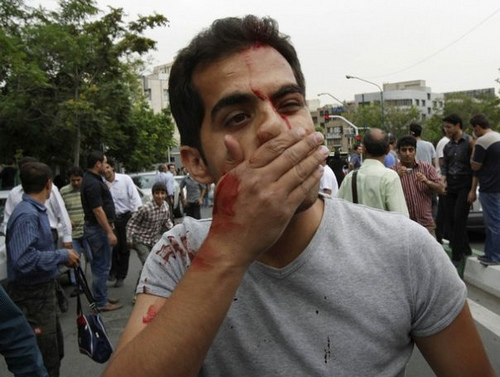 Iran’s future: who does it belong to? (CC: Faramarz Hashemi)

SMS, web sites, and satellite TV are blocked as the mullahs broadcast reassuring images from Ahmadinejad’s victory rallies on domestic television. The government seems to be nervously botching the thing, because soon after the polls closed they very quickly announced lopsided election results. Why bother to even count the votes and fudge the figures if you think you may lose badly: just jump straight into repressive crackdown.

The political opposition is acting in unity. According to The New York Times, “opposition leaders have cataloged a list of what they call election violations and irregularities in the vote, which most observers had expected to go to a second-round runoff . . . Two of the three opposition candidates and a clerical group issued fresh statements requesting an annulment of the election on Friday . . . Those resisting the election results gained a potentially important new ally on Sunday when a moderate clerical body, the Association of Combatant Clergy, issued a statement posted on reformist Web sites saying that the vote was rigged and calling for it to be annulled.”

I saw one blog post that mentioned that it was student protests in 1979 that led to the overthrow of the Shah and the birth of the Islamic Republic. The rapidity with which that entrenched autocracy was overthrown and replaced surprised the world then. Today Iran has a 30% unemployment rate which means a lot of young people full of passion that their best years not be wasted, with plenty of free time to organize, with or without the advantages of SMS technology.

So, this week will be interesting: the progressive elements within Iran will fight hard and win some sort of victory, or they will be beaten down with greater ferocity. Although I have no power in the matter, I know who I am rooting for.

Perhaps they are just being self-important, and I can’t help but imagine that the government is blocking them, but if this is even 10% true, well, Twitter and their network provider are doing the right thing in rescheduling some network maintenance:

“Our network partners at NTT America recognize the role Twitter is currently playing as an important communication tool in Iran. Tonight’s planned maintenance has been rescheduled to tomorrow between 2-3p PST (1:30a in Iran).”

I mean, if there is something for which Twitter could be genuinely useful it would be to quickly gather people together for public demonstrations.

I hate spam at least as much as the next guy. Heck, fighting spam is my day job. But I just gotta say, this little guy who made it through the Gmail spam filter this morning just made me smile: 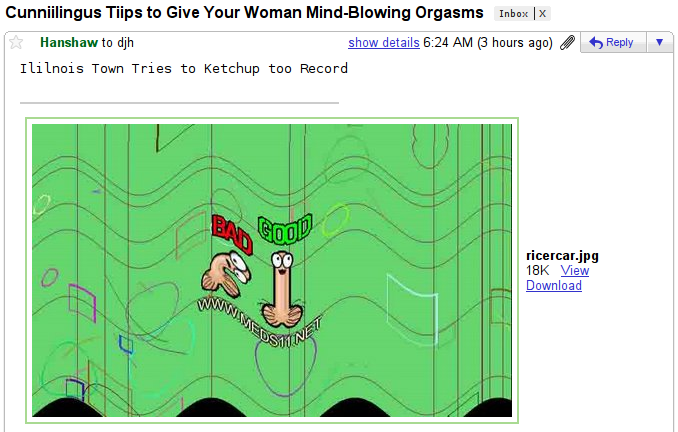 Back in 2005, Marissa Mayer, VP of Search Products & User Experience at Google, stated:

“There will not be crazy, flashy, graphical doodads flying and popping up all over the Google site. Ever.”

Apparently Google lacks the same sort of respect for the web sites of its AdSense customers, because they started putting animated advertising on my site.

According to Google’s “self-service tech support” there is no way to turn them off, short of reverting to text-only ads.

This is wrong on a few levels. And I’m not sure if Google is just being its regular sloppy self or if they are getting desperate for revenue such that they’re finding more wiggle room in the “don’t be evil” philosophy.

Whatever is going on down in Mountain View, I will just get along without the $10/mo or so I’ve gotten from AdSense revenue. There’s a new billboard at the bus stop at 19th Ave and Taraval. I could read the first three characters with my own little brain:

Looking up the fourth character: å…¨ (all) I see that the last two characters together mean "safety". å®‰ is easy to remember, because "woman under a roof" means safety / shelter / security.

There are many insurance agencies in the neighborhood.

This quiz gets it right: