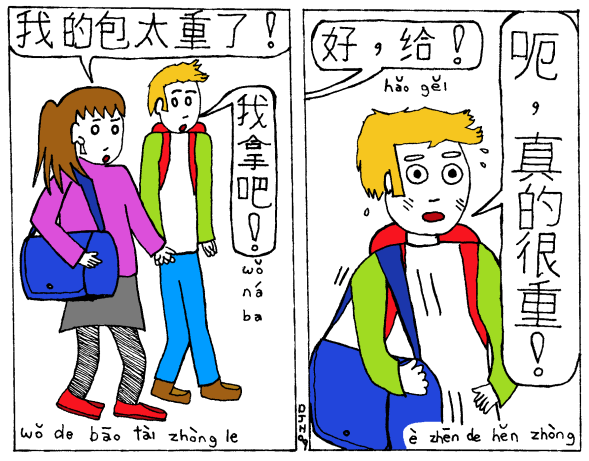 Thanks, Joe, for nudging me along.

The University of Melbourne study showed that people who use the Internet for personal reasons at work are about 9 percent more productive that those who do not.

“Short and unobtrusive breaks, such as a quick surf of the Internet, enables the mind to rest itself, leading to a higher total net concentration for a days’ work, and as a result, increased productivity,” [Study author Brent Coker] said.

Nine percent, biatch! The article points out they’re talking Internet browsing < 20% of the time, and that Internet addicts lose productivity. I think this is consistent with “work-life balance” . . . take a break to clear your mind, then get back to work refreshed.

Taking a walk in the sunshine is also a nice alternative to the Intarnetz.

I also think drinking lots of water and coffee is a good habit: you keep getting out of your chair to adjust your fluid balance, if ya know what I mean. Also, eating-at-your-desk is an awful awful sin which should be committed only when you don’t have much choice. Like, on Tuesday I had an all-day deployment, otherwise I take my food down to a sunny spot in the cafeteria and enjoy with a book or magazine.

We used to visit Newton, IA every year or two for McConeghey family reunions. Iowa’s a nice place, though admittedly somewhat dull. But today, America has a big patch of purple right at its heart because the Iowa Supreme Court has declared the state’s ban on same-sex marriage unconstitutional. Joe Eskenazi explains beautifully in “Will Gay Mecca Relocate From San Francisco To Des Moines?”

Disdain of San Franciscans’ disdain of all things Midwestern has become nearly as clichÃ©d as the original sin. And, yet, there’s always a touch of schadenfreude anticipating city residents’ chagrin whenever legitimately good news emanates from the Midwest indicating its denizens have out-progressived our self-anointed capital of progressivism.

The Iowa Supreme Court this morning did what many observers feel its San Francisco-based California colleagues will not — rule that a ban on same-sex marriage violates the constitutional rights of gay and lesbian couples. This morning’s decision adds Iowa to the very short list of states in which same-sex marriage is legal — Connecticut, Massachusetts, and, now, The Tall Corn State. Perhaps it’s only fitting for a state with the motto “Our liberties we prize and our rights we will maintain.”

From what I have read, if conservatives want to defeat this, it will require the legislature to put a constitutional amendment on the ballot. This could be done by 2011, and even then Iowa residents may not support it. Personally, I’m just really proud to see progress being made on this issue, from of all places, the “fly over country” where I grew up. (Well, I’m from Illinois, but I can still root for the hawkeyes on this one.)

Eileen linked me to this YouTube video. It rocks. It is Iowa’s Senate Majority leader Mike Gronstal making it clear, in no uncertain terms, that he will not cooperate with the Republicans to amend Iowa’s constitution to ban gay marriage. He quotes his daughter, Kate, after listening for several minutes to her older colleagues complain about the subject:

Well, I, for one, care. And Mike Gronstal is clearly compassionate and thoughtful on the subject:

I think I learned something from my daughter that day, when she said that. And I’ve talked with other people about it and that’s what I see, Senator McKinley. I see a bunch of people that merely want to profess their love for each other, and want state law to recognize that.

No, Senator McKinley, I will not co-sponsor a leadership bill with you.

And Vermont passed gay marriage, this time through the legislature, and overriding a governor’s veto! Sure, gay marriage can be had in only four states today, but I’m getting this hopeful feeling that the cooler heads prevailing in Iowa are the real tipping point. The Right thought California would lead the nation, and they fought hard to win Prop 8, and they won that battle. But while they were fixated on the West Coast, they have been outflanked by the reasonable Midwesterners making reasonable decisions in the middle of the country. Hoorah!

Also good, thank you Tom, is the Supreme Court Summary for Varnum v Brien, which lays out in simple language over six pages the case for why gay marriage ought to be legal. Basically, unless there’s a compelling reason to ban it, equal protection means you should allow it, and there’s no compelling argument for why a state ought to ban it, so, now, Iowa has it!

I was at some sort of lecture for really smart people, and a precocious young woman asked a technical question of the speaker, who answered back with some Math, and the questioner apologetically asked for a moment to run the Math through her head before she could follow-up. The speaker replied that she should take her time, because after all, “this is an open forum, not scramble time at a methadone clinic.”

And I was like where the heck did that line come from?!

Later in the dream I was looking for my car in a parking garage and found it not where I thought I had parked it but a little ways away where I had actually parked it earlier in the dream. I was like “this dream has a great continuity” and then I had to pee so I was looking for a toilet in the parking garage. That is when I got up to pee, and realized that I had slept really soundly this night. I was glad the sun was managing to peek through the clouds.

I am presently enjoying an old thick history book. A footnote in the first chapter says:

“Biologically considered, the distinguishing mark of humanity was systematic developmental retardation, making the human child infantile in comparison to the normal protohuman. Some adult human traits are also infantile when compared to those of an ape: e.g., the overdevelopment of brain size in relation to the rest of the body, underdevelopment of teeth and brow-ridges. But developmental retardation of course meant prolonged plasticity, so that learning could be lengthened. Thereby the range of cultural as against mere biological evolution widened enormously; and humanity launched itself upon a biologically as well as historically extraordinary career.”

W H McNeill
“The Rise of the West”

I was thinking that domesticated animals are similarly developmentally retarded relations of their wild kin. Dogs mature to a wolfishly adolescent level. By remaining in a younger, more affably co-dependent state, they more easily get along with humans. From what I have seen, a lot of adult humans could be described as childish, and while the usual concern is that they are less effective for their childishness, they also subordinate themselves more readily to more ambitious leaders, and this facilitates collaboration.

Or, I guess, domesticated humans and animals fall more naturally into packs, for better and for worse. 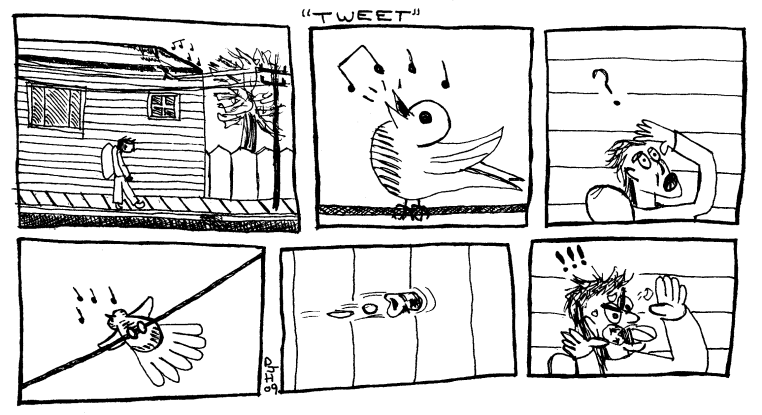 In order to make a Mac nearly half as useful as a typical Unix distribution, you have to sign up with Apple to download special “developer” stuff like a compiler. That means that years after you have given up on using a Mac, you’ll get funny spam like this one: 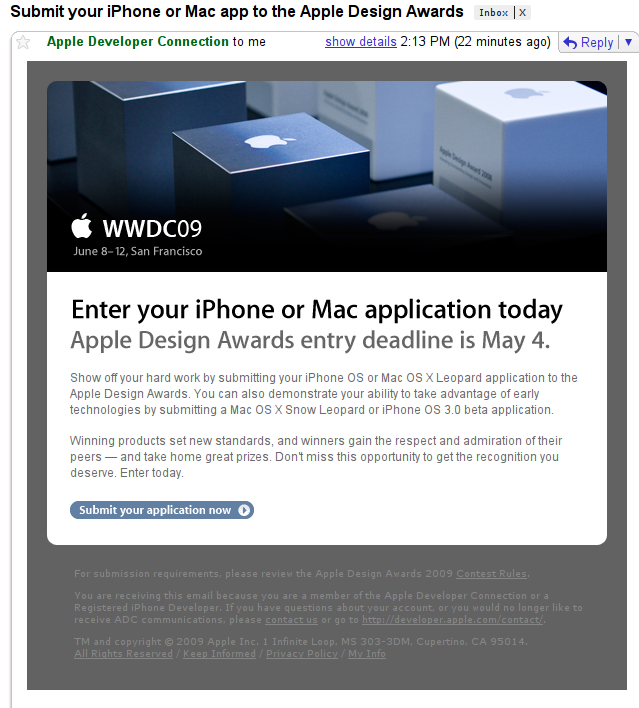 So, they are soliciting me for a design contest, and the “fine print” to unsubscribe is not merely the usual small, gray text, but small, gray text on a gray background. Layers of delicious failure.

The last spam I received from Apple was for a recruiting event, with no unsubscribe option whatever.