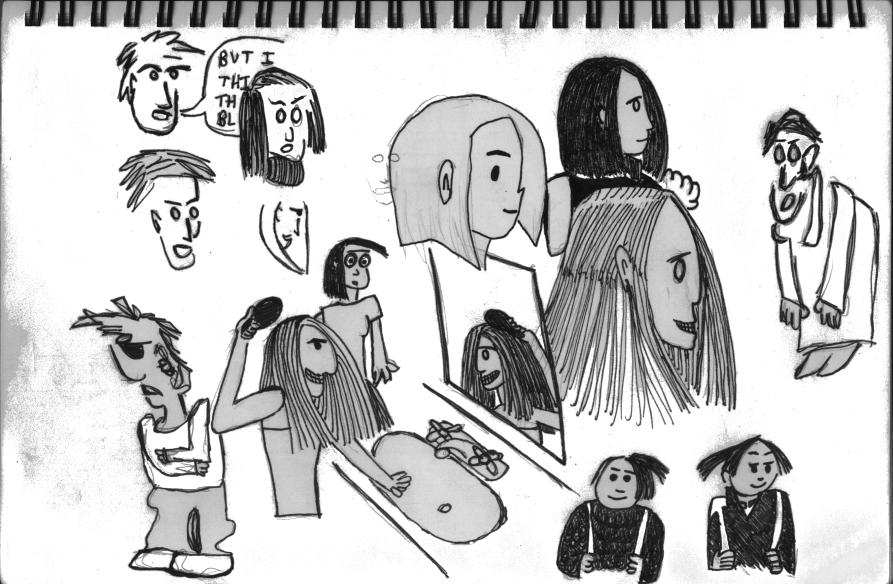 I haven’t drawn much in a while. Working through a periodic video game addiction. (Railroad Tycoon 3, w00tw00t!!)

Today I went to doodling in pencil, then ink. Scan . . . well, this is all just learning here anyway, so instead of “lineart” I went for “greyscale” then flood-filled the white areas in Gimp. No erasing the pencil marks either. A more laid-back feel.

Yes, the theme today is girls and their hair, using Bryan Lee O’Malley’s “Scott Pilgrim’s Precious Little Life” as a guide / inspiration. Also, the girlfriend. My favorite subject above is near the top, just right of center.

I just learned that Haagen Dazs are downsizing their ice cream cartons from 16oz to 14oz. I don’t like this!

If this were any other food, reducing the size a bit to keep costs in line and maybe keep us from getting fat is a reasonable thing. But Haagen Dazs isn’t food, it is Joy in the form of a delicious treat and I would much rather pay a little bit more for Joy than receive less.

Ben and Jerry’s is keeping their size and their comparable price, but their ice cream is overly-sweet glop. Haagen Dazs is a superior product for which I’d gladly pay a bit more!

Capital One Visa are Greedy Bastards

Recently someone obtained my social security number and home address and phoned in to various credit card companies claiming to be me, claiming they were traveling and needed a cash advance. They claimed they had left the credit card at home and otherwise failed to provide correct information. So, the credit card companies said no, and each in turn called me, and offered to send me new cards with new credit card numbers, just in case, and I put a fraud alert on my credit report, and aside from the idea that someone is running around with my social security number and will surely try to identity thieve one day in the future, life went on happily.

My Chase credit cards both appeared overnight, on my doorstep, courtesy of FedEx. I have double-checked now, and seen no fees for this courtesy. Capital One, on the other hand, appeared the next week via first class USPS. That’s good enough for me, but what also appeared the next week was a statement with a $16.00 “Fast Card Fee”.

So, instead of calling in to activate the card, I called customer support. Within a few minutes I got a nice lady on the line, and instead of activating I simply canceled the card. I explained that the Fast Card Fee was insulting and wrong. She processed the cancellation and asked if there was anything else to be done. I thought a moment and asked to speak to the manager and when she asked why I explained that I wanted the Fast Card Fee refunded since the fee was not disclosed to me when the service was offered and contrary to her understanding the card was not dispatched “express mail” rather USPS First Class and further more those cards that had bothered with the expense of overnight mail didn’t charge me anything.

She went away for two minutes and when she returned she explained that she had gotten the fee reversed on the grounds that it had not been disclosed, but that even though the fee was canceled I should go ahead and pay the minimum balance by the due date and it would subsequently be refunded to me. I explained that I would do no such thing because by canceling the fee my balance would be 0 by the due date and if they want to charge me a late fee for failing to pay a zero balance . . .

Anyway, we’ll see. I’m mailing the thing back to them with a note and if they want to dig a deeper hole I’ll give them what for. As it is it is just nice to vent a little testimonial on my web site.

The other day at lunch my coworker challenged me:

“No, really! Donâ€™t just agree with me because you think Iâ€™m crazy!”

He then went on to explain that we only know how much carbon is in the atmosphere for a few centuries, max. I then explained that scientists go to Antarctica and Greenland, drill deep holes in the ice, and can analyze the frozen atmosphere from tens of thousands of years ago. He explains that carbon has fluctuated a great deal over time, and it is no big deal, and I explain that our species has developed civilization during a period of climatic stability, and that the last time there was this much carbon in the atmosphere there were dinosaurs running around, so the Earth can totally handle global warming but weâ€™re not sure if homo homo sapiens will survive it. He was like well its too late to stop it anyway, and I would have gone on to explain that when youâ€™re driving your car into a tree, you hit the breaks instead of the gas, because then youâ€™re more likely to live and have a better chance of reducing damage to and repairing your car . . . but we headed back to the office before things got too stupid.

And then, today, Al Gore posts a dramatic video to his blog.

This remarkable image sequence captures a series of massive calving events at Columbia Glacier near Valdez, Alaska. Composed of 436 frames taken between May and September of 2007, it shows the glacier rapidly retreating by about half a mile (1.6 kilometers), a volume loss of some 0.4 cubic miles (1.67 cubic kilometers) of ice or 400 billion gallons (1.5 trillion liters) of water.

And Iâ€™m like “a dramatic video of a glacier melting in Alaska over the course of five months . . . in the summer!”

And Iâ€™m like “Holy crap, Al, do you ever speak with a skeptic?! A dramatic video of a glacier melting in the summer makes you look like a tool!”

But, thereâ€™s no comments or feedback on his blog, so if I wish to sublimate my angst, Iâ€™ll do it here.

Some ways back I followed some advice somewhere and tried the Xoopit plugin for Gmail under the delusion that it would somehow make my life better. It was kind of cute but it also got in the way so I uninstalled the plugin. But I kept getting e-mails from them about all the crap it was indexing in my inbox. So, I finally deleted my account, at which point they sent me a message reminding me that I’ll have to kill the plugin, and also: 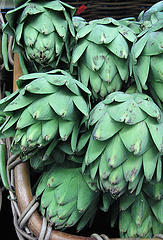 I’m not going to stick something in my mouth that is named “choke.” (CC: spychic)

Finally, please take one minute and reply to this email and let us know what you didn’t like about Xoopit. Your feedback is incredibly valuable to us!

Now, getting in to delete the account had been frustrating enough, because when you don’t remember your password and click on the password reset link they send you an e-mail that links to a web page where you can reset your password after you correctly enter your password. Yeah, that had me confused too, until I re-read the thing and it said “enter your Gmail password” which worked but then I was reminded that I’d given my Gmail password to something called Xoopit and I felt dirty all over again.

Anyway, here’s some of what I wrote. I think the name thing is important:

Also, and I mean, what’s in a name? I don’t eat artichokes. They may be delicious, but you know what? I’m not going to stick something in my mouth that is named “choke” . . . it just sounds like common sense. Xoopit? Okay? Like Arm pit? Tar pit? Snake pit? Is it pronounced Zoo Pit? Is that like where they dump all the animal feces to compost? Because I mean, they way you guys Hoover up all the multimedia crap in my Gmail it kinda feels that way. “Look! Look! I indexed all the crap you don’t care to look at, and I’m sending you more crap to delete!”

There is too much crap in my inbox. If you can make it better, you could be more useful to me. If you make it worse, I dump you. That’s it!

And, seriously, xoopit? You need to work on that name. Yes, Google is the best search engine, but it wouldn’t have caught on if it were named Dogpile.

Thank you for your email regarding the change to the size of our HÃ¤agen-Dazs cartons. We understand your concern and appreciate your giving us the opportunity to explain.

As you might imagine, the cost of continuing to offer the country’s finest all-natural superpremium ice cream has increased dramatically over the last several years. On average, we’re paying 25% more for raw ingredients today, and this is true despite what you may be hearing about a drop in some food costs.

By downsizing our cartons rather than increasing the price per carton, we’re balancing our need to cover our increased costs with the realization that our country is in an economic recession. We wanted to avoid a price increase that could put HÃ¤agen-Dazs out of reach for consumers.

From our choice of ingredients to the careful and deliberate way we craft our ice cream, we never skimp on quality. Nor will we compromise our commitment to 100% all-natural ingredients. We believe HÃ¤agen-Dazs ice cream lovers appreciate and rely on that commitment.

Please watch your mail for two gift certificates to arrive shortly, with our hope that you will continue to enjoy your favorite HÃ¤agen-Dazs flavors.

The Sun is an Excellent Magazine

A couple years back I came upon this magazine somewhere that was all poetry, prose, and black-and-white photographs. And the stuff inside was good. I love reading and I used to mostly keep up with The New Yorker. These days The Sun is one of two magazines I subscribe to. It is more enjoyable and less of a burden than The New Yorker.

Another thing about The Sun that I really appreciate is that there are no ads. Just me and the writer, mediated only by the editorial staff of The Sun and some pleasing typesetting. As the editor, Sy Safransky recently explained in his annual appeal for donations from Friends Of The Sun:

There’s nothing inherently wrong with some advertising, just as there’s nothing inherently wrong with a traveling salesman knocking on your door. But you probably wouldn’t invite the salesman in if you and a friend were having an intimate conversation. In a magazine that strives for emotional candor and a reader’s quiet respect, a sales pitch is an unwelcome distraction. I want to place one simple demand on a reader’s attention: the content. Nothing else.

I sent them some cash last year. This year I figured maybe I can send a couple subscribers? If you’re looking for good stuff to read on a monthly basis, I totally recommend a subscription to The Sun. And if you happen to be kinda poor, drop me a line with your home address because when I renew I have been known to throw in some gift subscriptions and you might could get lucky.