(Family) Bicycling is a Privilege, Which is Why You Should Do It

I have spent some time of late working on the “family cycling” problem. I would like to get my kids around town without a car. I would also like to bike to work, which is 10+ miles one way, which is a bit far for me to ride twice every day. Last year, I took a leap of faith and purchased a Radwagon. Around $2,200 all-in, including having a mobile bike shop assemble and deliver it. That is cheap for a bike that can haul kids on the back. It is great for my work commute, but the high back was too scary for my older son. 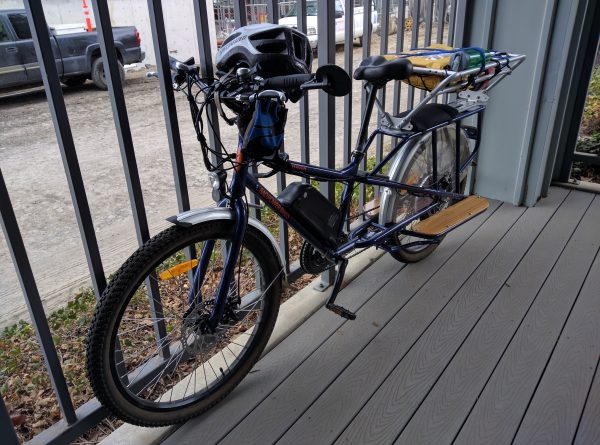 The Radwagon is pretty rad, but the rear cargo deck was too high for the older son to feel comfortable.

After the younger son turned 1, I got a baby seat (another $250, as I recall) and now I have a bike fanatic who loves the high ride adventures. This is great, because I have more encouragement for me to get riding.Â (Really, these are demands: “Dada, go go go go go! Byyyeee mama! Byyyeee bruhbruh! Dada, shoess!”) This is great, until the older kid starts feeling left out of quality time with Dad.

Before he could even walk, he could climb up on the running board of Daddy’s bike.

Thus began my quest for a family bicycle that could accomodate both boys: something lower …

There are a lot of options. There are bikes like the Radwagon but with a smaller wheel in the back, so kids can ride low. Non-motorized bikes from Yuba and Xtracycle start around $2,200. Motorized versions start around $4,500. There are bikes with a box up front: the classic Dutch Bakfiets can be imported from Europe for some insane amount of money. There are box-in-the-front tricycles from Bunch (around $2,600 delivered) and Wike in Canada. The Bunch has an electric option. Finally, I stumbled across Madsen, which sells “bucket bikes” which have a big, sturdy, plastic bucket on the rear that seats four. They start around $2,000, and can deliver at $2,200 (mostly) assembled, but I decided that really, I want to be able to drop kids off and head to work, so all in with e-assist and a few accessories is $3,500.

The next challenge is: a test ride. The Radwagon was a Leap of Faith with mixed results. There are “local” dealers for the more expensive bikes. This would mostly involve calling ahead to set up an appointment to ensure that the appropriate bike(s) are in stock and set up for a test ride, then schlepping the kids up to San Francisco. Fortunately, Madsen has a customer one town over that was willing to share a test ride. I was able to confirm that both boys enjoyed it, and the wife could fit in the bucket, too. The electric option is new for Madsen, so the bike I ordered won’t arrive until later this month.

Last Month, the Bike Snob published an article that declared that “No, Cycling Isn’t Elitist” which argues that family cycling can be more cost effective than driving. I wish that were true. I wouldn’t say that cycling is elitist, but where I live, where a car is a basic requirement to partipate in economic life, spending additional time and money to research, purchase, store, and maintain a family bicycle remains an act of privilege.

So, what to do: wring your hands and feel like a bougy jackass? On the contrary. I think that if you are in a position to enjoy family biking, and have the means to make it happen, then this is all the more reason to do it. If your family is out on the bike, it helps encourage drivers to be more careful, it opens eyes, and maybe nudges more people of privilege to try it out. Nudges politicians to prioritize safe bicycling infrastructure, which makes it easier for more folks to choose to ride more bikes …

The kids will outgrow the family cycle, and when it comes time to sell, the used bicycles get around the community at prices that are more affordable to folks with less privilege.

See Also: The Edgerunner Philosophy — “It has to do with mushrooms, opportunities, taking risks, and embracing change:”

Luminary mycologist Paul Stamets uses the term â€œedgerunnerâ€ to refer to the profound role that myceliumâ€”an extremely beneficial fungusâ€”plays in Earthâ€™s ecosystems, working at the edges of biological possibility in order to advance life.

As I see it: cycling may not be elitist, but it is definitely more accessible to privileged folks, so if you have the privilege to “work at the edge of possibility” you should consider taking it, in hopes of helping to normalize a beneficial activity and make it more accessible over time.

At the behest of my ISP, Sonic, I wrote a letter to the FCC, via https://savecompetition.com/:

I am a successful IT professional. I got my start in the 90s, answering phones at an independent ISP and getting folks online with their new modems. This was a great age when folks had a choice of any number of Internet SERVICE Providers who could help them get up and running on AT&T’s local telephone infrastructure.

To this very day, I use the DSL option available from the local Internet Service Provider (Sonic) over AT&T’s wires. I use this despite the fiber optic cable AT&T has hung on the pole in front of my house. Fiber would be so, so much faster, but I’m not going to pay for it until I have a CHOICE of providers, like Sonic, who has always been great about answering the phone and taking care of my Internet SERVICE needs.

The gist of this is: restrictive zoning makes housing more expensive. The folks who can afford expensive housing tend to be college educated. College educated people tend to be more liberal, and vote Democratic.

If you restrict the amount of housing that can be built in a city, you squeeze out poor folks, and the folks who can afford to buy in are the “Liberal Elites.”

More restrictive counties tend to shed Republicans and become more Democratic over timeâ€”a pattern that seems to have accelerated since 2012. And, more restrictive counties tend to gain more college-educated people and shed fewer educated ones, which contributes to their partisan shift. As Sorens notes, college education may causally mediate a substantial part of the relationship between zoning and partisanship at the county level. In other words, a countyâ€™s becoming more educated as a result of building restrictions makes it more Democratic.

I think our policies, especially in the privileged suburb where I live, need to allow and facilitate more housing. As a Liberal Democrat, I do not want to live in a bubble community. While I take some pride in the idea that education leads to progressive politics, I am disappointed that a party that prides itself as a champion of the working class and the poor, gains a partisan advantage when the working class and poor get squeezed out of our communities.

As a Democrat in a Blue City, I think we owe a debt to our communities to correct restrictive zoning in order to redress the damage done to our own working class, who can not afford to live here.