The Road to Pueblo

I wanted to get down to Durango, about an hour away, in enough time to catch the day’s scenic excursion ride to Silverton and back on the Durango and Silverton Railroad, before pushing on to arrive in Pueblo. I took a nice hot shower, then packed and loaded up the car. I was concerned at the ice on the windshield, and I without a scraper, but that concern was backburnered because the car didn’t start.

I figured I’d revisit the problem after I had grabbed a cup of mind-enhancing coffee.
I grabbed my travel mug and headed toward the cafe where I had dined on pizza last night, and encountered a lady who explained that that guy usually opens around noon. I walked over to the main street and up a couple blocks and grabbed some coffee and a muffin at a bustling shop full of snowboarder duuudes.

I hustled back to the car, and the same lady from earlier passed by, and I asked about mechanics. There were a couple in town, but they were closed today. You could knock at their house, and they might help, but it is probably better to let them alone. I agreed that I like to have my weekends off, too, and as much as I’d like to spend the evening with the family in Pueblo, I figured that I could get a lot of reading done and rest easily another night in this quiet little mountain town. Maybe I could track down the train station and welcome the steam train as it arrived in this old snowy mountain town, which could be a lot of fun even if I didn’t get to ride.

All the same, I fiddled with the wires some more, but I couldn’t do much without even the most basic tools, so I wandered toward the highway were there looked to be gas stations, where I might find a brief diversion, and possibly even something useful.

I found someone useful. The guy at the Citgo admitted that this was the first weekend of the season that they were open for weekend service, but that he wasn’t a real mechanic, just the weekend warrior. (The owner / mechanic’s son, it turns out.) He said he had a few ideas that might help, but that he’d have to close the shop for a few minutes . . . I wandered back to the car and a bit later he pulled up to the hostel, cleaned up my ugly battery wires, noting that the one terminal had been overtightened and cracked, so let’s put on a new one . . . explaining that you only have to tighten the terminal to the point where it doesn’t move on the post . . . doesn’t start? Okay, so, you did the right by the battery, and the solenoid, so yeah, its looking like a bad starter.

Sure, he could order a new starter and get it replaced during the week, but in this situation, sometimes you could tap the starter a few times with a hammer, and then he crawled under the car on the muddy street, found the starter motor, tapped, got out of the way, and I successfully started the car. He explained where the starter is, and that it looks like a cylinder, and in my case, a very rusty cylinder, and that I could tap it myself if I had to, but that at this point, the starter is likely about to fail completely . . . it might work fine, the tapping trick might work a few more times, but most likely I’ve got just a few more starts, if any, before the thing fails completely and leaves me stranded somewhere. We figured that I might as well keep the engine running and get to Pueblo as soon as possible, where the starter could be replaced under favorable conditions. He reminded me that you don’t actually have to stop the engine to fill the tank . . .

I beamed as he modestly basked for just the briefest moment in heroic glory. I got the sense that he might be most content to account the incident as a good deed, and waited just a moment more before I inquired as to whether and how much cash he should charge for his time. He figured about fifteen or twenty dollars. He then, as I figure it, very quickly considered my circumstances versus my poverty . . . computer guy from San Francisco . . . not working . . . going to see Dad . . . nice old clunker . . . is going to need a starter . . . stayed at the youth hostel . . . and set the charge at $15.

I headed down the road, and there was still a chance I could make Durango in time to catch the train, maybe, and I thought over whether it would be worth the risk if I could, and concluding that yes, if I made Durango in good time I would risk stopping the car if I got to ride the train, because even if I got stuck, I would have had a good time for my trouble.

At any rate, I was still on the highway at 10:00, when the train was set to leave. Several minutes later I noticed some smoke on the horizon . . . I slowed down and listened out the window . . . yes, that was the train coming toward me, parallel to the highway!

You know I pulled over to the shoulder and managed to squeeze some pictures out of my dying old camera! And these were the last pictures I ever took with this camera, which has since refused to work at all. 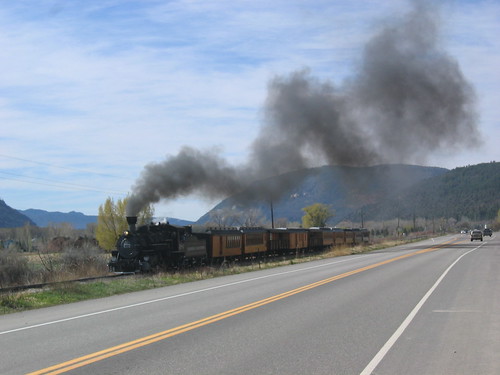 My last camera, a Canon S100, died at around the same time as Grandma Howard, so I gifted the-camera-I’d-taken-round-the-world to my Grandma to take with her in her coffin to her next life, which makes me inclined to see changing-cameras as epochal. It had been a weird twist of fate to have been in the Midwest at that time, which allowed me to visit her in the hospital just before she entered hospice, and which allowed me to drive back up to Michigan for her funeral not long after. I was pretty broke that summer, working in the cafe in Champaign, and it wasn’t until I was back at Mom’s house and living on Unemployment Insurance that I dared to buy my Canon S400, which I badly wanted for a trip that Yayoi arranged for us: we drove together in my car to Boston so she could check out a job fair. That was the first road trip that I took with a woman who, when I returned to professional work, I invited to live with me. Later, we would marry, move to California, and become separated. I took a third professional job in San Francisco during the divorce process, and shortly after the divorce concluded, so did my most recent job.

So, you will pardon me if I read extra significance into these last photographs and bust into personal metaphor; As the day began, the trip to Durango looked unlikely, but with some outside help, I was pleasantly surprised to be on the way. I was warned that stopping to catch this train was risky, but I decided to take the chance and try for the ride. It proved to be a long shot, and I ultimately missed the full experience, but I am glad I made the effort, because I got close enough to be reminded of my own love for what I had pursued. I don’t regret the near miss, and I know better than to blame anyone. What I do know is that I really dig trains, and that at the next appropriate opportunity, it will be my privilege to buy a ticket, hop into the cab, and work to keep the fire stoked for a prolonged ride through beautiful country. (And until then, I will work for a better understanding of the whole darn thing, to avoid or at least tackle nasty surprises on the next trip.)

So, I rolled through Durango without stopping, and turned East onto US-160. Since I hadn’t stopped to ride the train, I was ahead of time, and perhaps the natural beauty of the mountains on my final leg was further enhanced by mid-day light, as well as my own hunger from not stopping for food, and my eagerness to pull into Pueblo sooner-than-expected, to see Dad and Gwen. That was a good ride, and a homecoming that did us all some good.