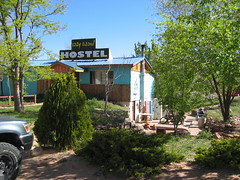 It was a rough night at the Lazy Lizard on a thin mattress with a thin pillow. I tossed and turned and just as I was getting my sleep on right my roommates began to stir in noisy ways so that they could get a start on the day’s rock climbing. Americans are not accustomed to the ways of youth hostels, and these guys loved to rifle through their luggage and tromp in and out, leaving the door open. I got up several times throughout the morning to shut the door. At one point I sat up awake waiting for one of the last guys to finish his noisy morning rituals and make his way out of the room. He greeted me and asked if I was a climber. When I told him no he expressed a sentiment that I was probably a nice person anyway, and he was gone, and I rested well a bit longer.

Probably around 0800 or 0900 I made my way out of bed, downstairs, apologized for waking the guy up in the middle of the night, and gave him $9.80 (tax, you see) and bathed. I packed up the car, looking forward to a breakfast in town, some hiking, and some scenic driving. I turned the key in the ignition and where the car usually makes a confident rumbling sound to get the engine purring I heard a click.

The battery wasn’t dead, but perhaps it was weak. I got the cables out and bummed a jump off a fellow traveler. Nada. A bit longer? No.

Could be a bad battery. The hostel guy suggested the auto parts store was a twenty minute walk into town, and the maintenance guy might be going that way in a while and could give me a lift. I said I wanted a hike anyway, so I walked down the highway for not more than five minutes and bought a new battery. The battery was much larger than the one I purchased last year, but I figured bigger is better. The folks at the store lent me a crescent wrench to get the new battery swapped in.

I had thought to stow the battery in my backpack, but the battery was too large, and needed to be carried level, and besides it was heavy enough to possibly damage or destroy the backpack that has been my long-time companion around the world. I carried that sucker, taking breaks every hundred feet or so to switch arms . . . a guy was packing something in his pickup truck along the way and he offered a ride, which I politely declined . . . it is not that far. A bit farther and another guy offered another ride in his pickup truck. I accepted, and was dropped off in front of my car.

I extracted the old battery, stowing it on the floor in front of the passenger’s seat, and installed the new battery, all charged and ready and–click.

“Well, I took an auto shop class twenty years ago . . .” offered the hostel guy. He took a listen to the click. The starter solenoid goes click. Well, you could try replacing that . . .

I walked back down to the parts store and easily carried back a starter solenoid. More work with the wrench and nada. Dang.

So, I asked a couple from Oregon about the mechanic they were waiting to hear back from. They said the guy had been really busy and might not be able to figure out there car today and the woman had figured out Greyhound tickets so she wouldn’t have to miss work on Monday. Gee. I wandered down the road a bit to what looked like a service station where the guys were working on Jeeps. I explained my plight. The guys said they did Jeep rentals and only knew how to service their own fleet. The more mechanically-inclined fellow affirmed that yes, start with the battery, then the solenoid . . . he recalled that with Fords often if the current from the battery is too low then the solenoid wont send any current to the starter . . . anyway, there’s a really good mechanic a little ways down in a big yellow building, and in front of him is another mechanic who is also pretty good.

So, I wandered down the road. Both mechanics were closed. I sighed and wandered back towards the hostel, figuring that worst-case, Moab isn’t such a bad place and the hostel should be cozy for a few days. I badly needed coffee and so stopped by the roadside espresso stand just a little ways down from the hostel. The guy working in the stand was friendly and asked how everything was. I replied that things were good overall, but I had to figure out my car problem. He suggested another guy that might be helpful just a few doors the other side of the hostel, and explained what he called “an old redneck trick” of climbing under the car and shorting the terminals on the starter to get a car started. That sounded worth a try, maybe. He didn’t know if his friend would be open, but he might be. He gave the guy a call and left a message, “but that doesn’t mean he’s closed.” My coffee was on the house.

I walked over there and the guy looked pretty closed, which was easy for me to accept, the kindness of the guy at the espresso stand had buoyed my spirits. I wandered back to the car, and poked around a bit. The wires coming off the negative terminal have always been a bit gnarly, so I cleaned them up a bit and gave the ignition another try and the beast started!

So, I rolled down to the auto parts store and waited a decent while to return the old battery. (I figured the big new battery a worthwhile investment, anyway.) While I was waiting I ended up talking to this other guy about the various symptoms–for example, the alternator light was on as I left the car idling. He suggested I hit it with a piece of wood and see if it started to whine. I banged the alternator with something and yes, it started to whine and the light went out. “That doesn’t mean its bad,” something about setting it to a known state because the indicator light needed a baseline or something. After we had concluded our respective business he had me follow him over to his shop, where he hooked the alternator up to a load tester, which verified that things looked good. 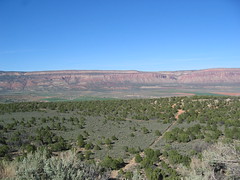 Well . . . I had missed my opportunity for a hike, but I could still have a meal and a scenic drive to Silverton. I popped into the Moab Diner with my maps to consider my itinerary options over a meal. The hostess assured me that a waitress would be right with me. I pored through maps and double-checked calculations, pondering some alternates . . . everything looked good and nobody had yet taken my order. I put my maps away, looked around. I tried making eye-contact with a few waitresses but they all seemed harried and uninterested. I calculated how much time I would need to order and eat and get out of there in order to make it to Silverton before sunset. I figured 3:45 would be my “drop dead” time and five minutes of being ignored later, I finished my ice water and headed out of town, stopping at the espresso stand, where a lady was now working, left a generous tip, and drove off into some beautiful beautiful breathtaking wonderful beautiful scenery. With my failing camera. That’s okay: some things are for my own eyes.

It was a good trip down UT-46, which became CO-90, but no gas along the way until I stopped at Naturita. There I found a green dinosaur logo and stopped at an old-school pump at a Sinclair station. The station was with the convenience store, and I asked the lady at the cash register is $3.05 per gallon was expensive by Colorado standards, and she explained that she hadn’t been beyond the neighboring town since Christmas, so she had no idea. Cool!

I pushed on and down US-550 South from Ouray, where I calculated I had enough time to make Silverton before dark . . . and I drove up, past signs advising of curvy roads, avalanche zones, and speed limits between 10 and 30 MPH much of the way. Up and up twists and turns and curves and well-plowed snow and ice, and freezing water streaming across the road way. Occasional wild animals and oncoming cars, nobody passed me and I passed nobody. Much of the time it was me, the car, and a blue-gray sky going on twilight. Where the scenery of the afternoon had been beautiful, the scenery of early evening was transcendent. It felt very much as if I had drove clear up into some special realm where we mortals are allowed to tread only in times of fair weather, and with great caution. My experience of the road between Ouray and Silverton was this: sublime.

I pulled in to Silverton, which looks every bit an old west mining town with very broad streets. There was snow piled along the streets, and it was nice to be visiting with a proper Winter. I couldn’t figure out the street signs but managed to find the Silverton Inn and Hostel without much trouble. I parked in front, walked right in, studied the notes left to would-be visitors explaining guest cards and rates, toured the available rooms, picked a bed, filled out a card, and took a key. I stopped down the corner where the guy admitted he would have been closed an hour ago, but that he would “make hay” and although he was out of most of his toppings he managed to make for me a delicious pizza, which I enjoyed in the company of his other customers, whose primary interest was skiing. There was further discussion of the guy’s need to sell the property we were on, which included not only the cafe we were enjoying but the energy-efficient house he had built behind it, because he was moving to New Mexico. I then dropped by the bar one block over, and for two or three dollars enjoyed good beer in the presence of a colorful cast of relaxing locals.

I turned in early and slept a good, solid, comfortable Winter sleep on a firm $20 bunk.