I guess I have been buying a lot of random stuff on Amazon.com, all the same: 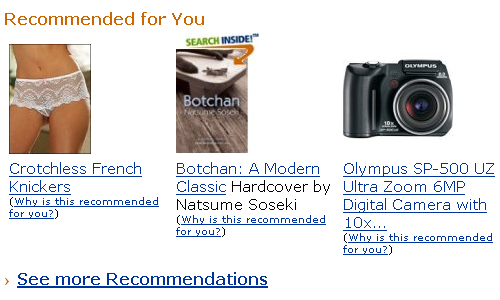 On my way home on Thursday, I stopped to check out a protest on Market Street. It has been a while, and people were gearing up to protest the President’s recently-proposed “troop surge”. I stopped to take a few pictures, and when I got home I spliced together a short video:

A World Tour by Epic Films

I received three movies today. I purchased each one because I enjoyed them each a great deal. They are epic films–two are over three hours long–and they’re all movies I watched alone in Walnut Creek after Yayoi left last year. So, they have an extra layer of special to me. Looking back, I would say that long, dramatic historical epics are great “breakup movies” to watch alone while contemplating life. Or, well, they worked for me.

As memory serves, the first movie that I saw was “Lawrence of Arabia” in which an eccentric, talented, idealistic, and iconoclastic young man with blond hair and dreamy blue eyes gets mixed up in the Arab revolt against British colonial rule. When you meet him as a young man in an office in the middle of the desert somewhere, he is explaining to his companion, in the third person, how boring his current job is . . . he extinguishes a match against his hand, just because, and when his friend hurts himself copying the move, and wants to know the trick, Lawrence explains “the trick is not to be bothered by the pain.” The movie is about three and a half hours long, which is insane, but then so is the subject matter, and three and a half hours is not so long to find yourself lost in the mystery of Arabia. I believe I watched this movie twice, and my description doesn’t do it justice.

The next is “Doctor Zhivago”, that movie we’ve all heard about but none of us has ever watched. Well, I watched it. I don’t remember it as well as Lawrence, but I do remember that this was another epic 1960’s film in which you could get lost in the lead actor’s face, his eyes. You again have the impression of a remarkable man in remarkable times, and the three and a half hours is spent guiding the protagonist through the vagaries of the Russian Revolution and World War II, ending up in this enchantingly weird “ice palace” toward the end. I look forward to an occasion to re-watch this . . .

. . . the third film–and there’s a good chance that you have never heard of it–is Zhang Yimou’s “To Live” . . . at a modest two hours and thirteen minutes, you witness the story of a guy whose wife leaves him because he won’t stop gambling, and he gambles everything away, and then he’s drafted into the war to fight the Japanese, then he finds himself fighting the Communists, then he finds the Communists have pretty much won, he makes his way home, is rejoined by his wife, and it turns out that having lost his material wealth is a good start for Communism . . . the film just barely starts there, and you travel through another decade or two of their life together under the various kinks of Chinese rule. In that it is an epic that brings you through WWII and a Communist revolution, this movie is a lot like Zhivago, but more focused on action and narrative than on the character of the protagonist. I think it is more approachable.

And, more precious. It is out of print and the DVD was over $50 on the Amazon.com Marketplace!

I am thinking I will have to have friends over some nights for epic movie watchin’. If you happen to be interested in getting in on a viewing, let me know, right?

Some notes I dropped on Yelp Talk:

In my marriage, all the income went into the Savings account.
We drew an equal allowance, transferred monthly to separate Checking accounts.
We shared expenses equally. We each wrote a check for half the rent, I covered utilities, she covered groceries.
The wife was a student, the husband a tech professional.
I figured over time the breadwinner status might change.

I still think this was an awesome system. :) Basically, you set the allowances such that the Savings should grow over time, and there’s a “buffer” in the Savings account so that short-term loans may be drawn as needed to cover overages. Both partners are financial equals, and earning your money is something done for the family unit.

My last employer was slow setting up the 401(k) so at the end of 2006, we enrolled in individual Roth IRAs, and rolled some of the Savings into the 2005 Retirement.

One “advantage” of the individual IRAs turned out to be that in dividing community property at separation, the “community property” of retirement savings was pretty much “done” . . . not sure how it works with 401(k)s.

Last, I recommend that once you guys are ready to marry or such, you start your new life together with new accounts, etc. In the unfortunate event that you need to calculate “community property” down the road, having accounts clearly understood CP versus pre-marriage, that’s helpful.