Ever try to read the Bible? It can take a lot of effort. The original version was in Biblical Hebrew, and had no vowels. Later scholars “interpreted” this source material, filling in the vowels. This was in turn translated into Latin, which informs much of our English translation of the Good Book.

I was thinking, just for fun, to run the Book of Genesis through Babelfish to Japanese and back again. Just to see if the “Engrish Bible” might be at all entertaining. “I barely understood the Japanese translation in Japan,” said Yayoi. I think the English is hard to follow.

Without further ado, the Book of Genesis, as translated into Engrish. Just remember, if you think this version is messed up, the version you are used to has been translated twice, and originally had no vowels! END_OF_DOCUMENT_TOKEN_TO_BE_REPLACED

A while back, a server crashed, and shortly before the page hit my sidekick, I dreamt that a server had crashed.

I just took a call from a guy who says I won a free lunch. END_OF_DOCUMENT_TOKEN_TO_BE_REPLACED

I have been thinking that I’d like a web-based aggregator that doesn’t suck. Bloglines is all about the frames, Rojo is all about not actually working right, and Yahoo! and Google “ig” are just little sticky-notes-in-a-portal . . .

If you ask Timothy “Speed” Levitch: 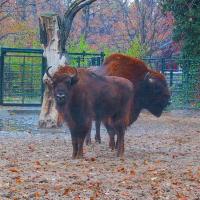 I’ve been working to promote my idea for Ground Zero that’s embedded in the new short documentary we’ve been taking around to film festivals called Live from Shiva’s Dance Floor. It’s called “The Buffalo Idea.” It’s an idea that came about from a whole conversation of artists. And we’d like to use the land currently called Ground Zero and turn it into a Joy Park and grazing land for American Bison. The idea is that the central monument should not be an inanimate piece of stone but it should be something that’s alive, that has a heartbeat and that propagates. I think that a lot of what was felt by the people who came up with the idea is that the American Bison represents and indigenous American community that has been experiencing September 11th for 400 years. According to different statistics I’ve heard, there was something like 75 million Buffalo on the continent when the first Europeans arrived and by the 1890’s there was about 200 left. Definitely a tribe of holocaust survivors. A tribe that knows the suffering of September 11th, and the healing. I myself have had the opportunity to stand with free roaming Buffalo in the wild-a great feeling. An amazing experience, almost cosmopolitan. You’d be surprised to see how much cosmopolitanism exist within the average bison and I’m sure the average bison would be surprised to see how much wild exist in the average cosmopolitan. I think they have a lot to learn from each other. On the topic of the current plans for Ground Zero, I think it’s time for everybody to remember Cat Gilbert, the great New York Architect who designed the Woolworth building and the George Washington bridge- his definition of sky scraper was a machine that makes the land pay. I don’t think that the land should have to pay any more. I don’t think we should have to pay. I don’t think anyone should have to pay-I’m not sure what we owe. I think we’re all miraculously and unexplainably born into this and then suddenly everything has to pay. Everyone is debating over these plans, but they’re all the same to me, they’re all making the land pay.

I was reminded of this by Jeff.

So, I wrote the Kinky campaign: END_OF_DOCUMENT_TOKEN_TO_BE_REPLACED

Nextbot knows that the
Bird is the Word, that’s because
Somebody told him.

Don’t you know about
the Bird? Everybody got
a memo last week.

END_OF_DOCUMENT_TOKEN_TO_BE_REPLACED Normally, I have nothing at all to do with donkeys. Ever.
But, you read a book, your mind goes different places.
Mind-altering substances, indeed! No wonder books are frequently banned.

I read once, that people can fly, once they forget that they can’t fly.
I find that really enchanting but sometimes,
I worry that I will forget that I can not fly.
And that makes me nervous sometimes
When I walk to the bathroom at work.
Because we are on the fifth floor.

I have no donkey, I can not fly.
It is okay to dream,
But not okay to try.

The Daily Show and Piracy

We watch The Daily Show every day. It is actually one of the very few shows we watch regularly, and so instead of spending tens of dollars a month on cable television, we download our television off the Internet. It is a little less convenient because I have to download the shows manually instead of setting up a DVR, and the video quality is often inconsistent. On the other hand, the people who upload the shows edit the commercials out beforehand, and I can copy the files to a laptop to watch on the plane.

I got to the BART station this morning. I suppose it was a little chilly or something, because all the Real Californians were huddled in their jackets, like pigeons who tuck their heads into the bodies during the cold days of the winter, trying to stay warm while they scratch for food.

I thought it was invigorating, and not nearly as cold as the air conditioning on the bus in warmer days, when I have to pull the sweatshirt from my backpack that I carry for just such occasions, and for visiting the machine room, which we keep cooled with ferocity.

I suppose some of these folks came over from Oakland, and were still bracing themselves from the chillier air found over the mountain from Walnut Creek.

I’m a Google fan, and I’m a contrarian idealist. And I know the pain of being ignored by technical support while travelling abroad. So, I bring you Greg Kaiser‘s explanation of why Google Hates the United States: END_OF_DOCUMENT_TOKEN_TO_BE_REPLACED I feel bad for all the people suffering in New Orleans right now, but every time I hear that the South is being battered by ever more and stronger hurricanes, especially when it comes to Florida, I can’t help but remember that those are red states, and they support the President, and the President’s position is that global warming is an abstract, secular theory that scientists don’t agree on. You know, like evolution? It’s just a theory! And besides, we should call it “climate change.” I mean, even if our activities are changing the atmosphere and the climate, you don’t want to call it something vaguely threatening like “global warming:” please, it’s “climate change!”

And, even though the rest of the industrialized world has reached a consensus, the Kyoto Protocol, and are working to limit their emissions of Carbon Dioxide, I listen to the news that New Orleans in inundated, an entire city, quite possibly destroyed, and I’m reminded that “had we joined the Kyoto Treaty it would have cost America a lot of jobs,” and that acting to curb global warming would be overly damaging to our economy.

I read in the New Yorker that the last time our atmosphere was as thick with CO2 as it is now, alligators lived in the swamps of Colorado, not far from the ocean. It is going to take hundreds, maybe thousands of years for the Earth to adjust to this new point of equilibrium, and the transition period is going to be filled with lots of climatological uncertainty. It is mostly going to make the equatorial regions, which are already very hot, where the largest number of people live in the greatest poverty, all the more uninhabitable. The rest of us get to deal with extreme weather, prolonged droughts, prolonged flooding, and likely sudden, sharp rises in sea level as chunks of Antarctica and Greenland slip off and become seawater. END_OF_DOCUMENT_TOKEN_TO_BE_REPLACED