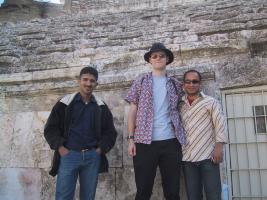 At the Roman Ampitheatre with Fauzi, and another friend whose name escapes me.

I had considered spending the next day and a half at Petra, returning Sunday to catch the red-eye flight I was scheduled to ride to Bangkok. The morning found me reluctant to leave my bed. I think that I’m too used to solitude, and where I can have all that I’d ever care for as I walk down the street in Europe or America, such is not to be had in Jordan, where I am obviously from somewhere else, and most people are eager to exchange good wishes, be it a smile, a nod, a wave, “hello”, “Welcome to Jordan” and others. Particularly those who speak some English, are all the more eager to hear from an American. In the quiet comfort of my bed, I get my mind to myself, and my dreams, and there’s no need to figure out how to get a service taxi or a minibus by asking overly-friendly folks for directions … and the ol’ immune system gets extra time to insure the body against whatever challenges the diet has introduced it to.

Until the phone rings. Fauzi is here. Well, okay, I secretly wanted to get out of bed and see the country that I’m visiting. I did the old toothbrush thing and met Fauzi and Mohammed and another guy in the lobby. We walked over to the Roman ampitheatre, which I’d neglected to visit the day before. This time we got to climb around and take pictures.

We took a cab somewhere where Fauzi had hoped to meet a friend, who wasn’t there. Another cab to the bus, and off to Jerash. We wandered around these ancient ruins for a while, Fauzi and I, then we rode another bus over towards Ajlun Castle, only we ended up in a barbershop, more Fauzi friends, where he made some calls, and then hitched a ride in a pickup truck to his Uncle’s house, nearby. The sun was coming down, which steals time from visiting castles on account of iftar.

Like Fauzi’s father, Fauzi’s uncle also spends time working in Chicago – airport taxi, or in the summer, ice-cream truck. Back in Ajlun he keeps his family in a nice house, where he can treat the occasional guest to a lavish iftar feast. Fauzi and I, in the parlor, were treated to mansaf – chicken on rice, with bread, veggies, and yogurt, with water, tea, coffee, a plate of fruits, and some sweets that are served only during Ramadan, that taste like the folded-over pancakes that they resemble. I had remembered to pack some Frankfurt brownies this morning, and these I shared with Fauzi and the kids, who romped around the guest room with us for the evening.

A few times, one of the young boys tried to drag me into the family area, I think, to see the computer, but I resisted, because I knew enough about the culture that male guests stick to the parlor, so as not to intrude on the domestic modesty of the family itself. I recounted this much to my gracious host, and he agreed with my assessment of the situation. It pleased me to have been a proper guest, in this regard, in order to complement my host’s excellent hospitality. 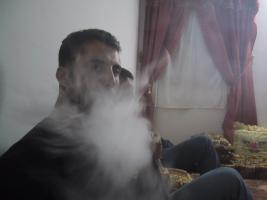 Ronal demonstrates the art of smoking flavored tobacco from a nargila. 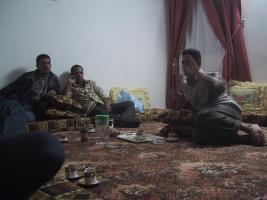 Our host, at right, expounds at great length, with considerable gesticulation, on some subject in Arabic. Interesting enough to watch …

After this, we went to another friend’s place nearby, where Ronal, a guy who spoke English with ease, made an appearance. I was put considerably at ease with the ability to really communicate with somebody for a change. We went over to yet another house in the same town where the guy had been playing with his TV but dropped that in favor of being a stunning host, plying us with fruit drinks, teas, and a nargila, from which we smoked a smooth, flavored tobacco. All in all it was an extremely pleasant evening.

To get back to Amman, someone called someone’s uncle to borrow a pickup truck. The fee for this was negotiated to JD12, which struck me as a fair amount of money, though it was cheaper than a cab. It is possible that I could have spent the night in someone’s parlor, and caught a cheap minibus back the next day, but I suppose that given my refusal two nights before, they figured it polite not to press me with such offers. Ronal drove us to Amman at top speed over Jordan’s steep rolling hills, four guys in the back seat of the crew cab, and me in the front next to Ronal, without seatbelt, holding on to the “Oh Shit!” handle and reassuring myself of the statistical unlikelihood of us dying a horrible death, however insane Ronal’s driving.

At some point in the trip I peeked over at Ronal’s instrument panel. Ronal asked if I was checking his speed, and I explained that I was actually checking the gas tank, and I explained that the American custom is to fill someone’s tank when you borrow their car. Ronal explained that this was unnecessary, given the 12JD. I’d have only wanted to do this myself had I more money than sense. The point for me was that a lot of what I had been experiencing was unfamiliar to me, and reaching out to establish the occasional cross-cultural equivalency reassured me.