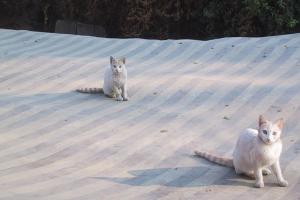 A pair of stray, non-Muslim cats, among the many who showed up to beg for my afternoon chicken wrap. 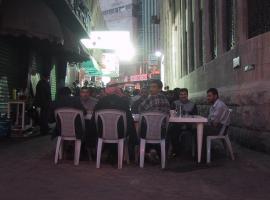 Working men enjoy their iftar meal at a restaurant near my hotel.

Today I decided to deliberately relax. I slept in, yet again, and then wandered down to the Roman ampitheatre, and found a quiet little café overlooking the ruins, where I was charged 2JD for a chicken wrap and lemonade, while the sun was still in the sky. I shared a few bits of chicken with some fellow non-Muslim stray cats, who hung around the place begging tourists for food. The quiet, mid-day relaxation was what I find “normal” for California, and this helped me to relax and catch up some on the journal.

As the short afternoon rolled along, I found one of the last remaining sunny spots on some steps near the forum. I exchanged a few smiles with another guy who set his letter aside and politely asked me for a conversation.

He was a Christian from Iraq, with a degree in Computer Engineering, waiting in Jordan to see if he would be awarded an EU visa, where he might have a chance at a more rewarding career than in Iraq. Of course, he’d rather try his luck in America, but as many had already lamented to me, the land of opportunity is pretty hard to get to these days.

He has my sympathy. I explained what I knew, that UK had the most restrictive immigration, and that he would be at a disadvantage in somewhere like Germany, where the economy is actually pretty slow right now, and they prefer people who speak German.

I tried to reassure him that I ran into several foreigners working in Germany, most notably at the hostel, and that he may be able to get by working somehow, perhaps near tourists, until he could land the tech job he wanted.

He was far from home, but I figured it beat staying in Iraq. We talked some politics. He said that when he saw the towers go down on 9/11 that it saddened him in such a way that he wished a disaster would have fallen on his own house instead. I tried to wrap my head around this and figure out if I felt the same way. I apologetically offered that the same could soon happen to his home anyway. Sanely, he did not seem eager for this to happen. He did offer that, for whatever excesses or stupidities one might criticize America for, if the same military power were in the hands of a Muslim country, the result would be one thousand times worse, and that religious fanatics would not hesitate to use unconventional weapons on infidels.

I combined this opinion with the reminders of World War II that I had just experienced in Berlin, and I too suddenly felt grateful that America’s military power belonged to a nation with such relatively benign motivations. On this trip, when I’ve found myself trying to account for the perceived evils of American foreign policy, I’ve come to figure and explain that in America, we have most everything we need, and we are bordered by two large oceans and two very friendly, peaceful, neighbors, and we are happy enough in our own country, that we really don’t care too much about the rest of the world, and we’re not too interested in running the bloody show, so when we find ourselves with this responsibility, we do an understandably half-assed job.

My companion then offered me the opinion that the Arab world is being held back by Islam. My own opinion is that we have Christian fanatics in America, but they’re fairly marginalized. A few centuries ago, when Europe was occasionally run by fanatics, a lot of evil and stupidity went on in the name of Christianity. Europe’s example suggests to me that religious autocracy is something the Arab world will also outgrow. He responded was that Islam was structured so as to facilitate fundamentalism; Unlike Christianity, whose Bible is a third-hand account of Christ’s word, translated a few times over, Mohammed wrote the Koran himself, in Arabic, giving the words greater unambiguous authority. Muslims who wish to emulate the prophet, who had several wives and waged war against non-Muslims, have greater “moral authority” to perpetrate their evil than do their Christian peers. I had to admit that I was pretty ignorant of the Koran, and thanked him for providing me with a new idea to study.

This was the only day I did not join anyone for iftar. I managed my way back to the hotel, and had a piece of flat bread that one of the TV guys had pressed on me the day before, washed down with a 300 fils Sprite.