A year ago I was finishing my second Steve Ramsey build. Or first, if you count the workbench as a “bonus” … I had fun doing the miter cuts and setting up a jig for square angles, sanding, gluing, assembling, screwing … the finishing and sanding and finishing and sanding and finishing was a drag, especially because it was cold out and I had to do the smelly stuff indoors and even put a little space heater in the garage just to keep the gooey stuff warm enough.

At the end of the day, I had a nice table. It has been sitting out in my yard all year, and the tabletop is still smooth as silk. 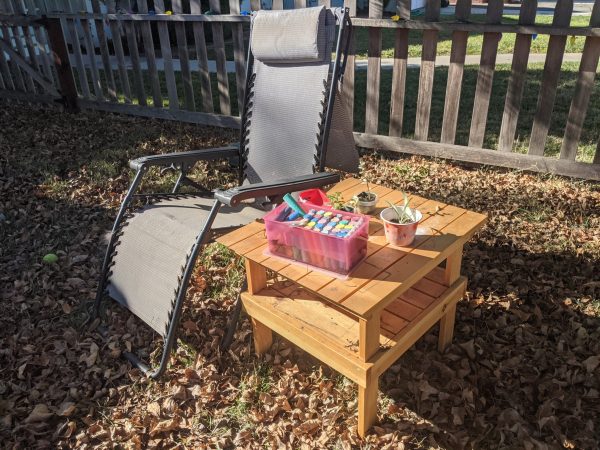 But as I finished that project, a mob attacked the US Capitol and tried to kill Congress, and we let it happen. We barely managed to keep our Democracy that day. I stayed up late to watch Congress certify the damn vote count. And a few weeks later I listened to Amanda Gorman’s poetry.

I look forward to rekindling my enthusiasm for woodworking. That’s been deferred a bit as I slowly erect a bike shed / fun fort in the back yard to store the bicycles so I can once again putter around the garage workshop.

Video Leans Upon the Radio Star

I remember asking Adina about the Green Caltrain blog. Had blogs died, or is that still a way to reach people? Times have changed, she acknowledged, but a lot of people subscribed to the blog via email, and that made it, to this day, a very good way for news to reach people. One “obsolete” technology relied on an older, and even more “obsolete” technology. Video leans upon the radio star.

I put “obsolete” in quotes because while blogs had their day and receded some, people still use them. And email is still great at being email. Some of us are even daring to believe in distributed communication platforms again, thanks to Elon’s ongoing effort to drive Twitter into a wall.

When I was in college, I initially avoided Computer Science, mainly because it felt like Microsoft was eating the technology world, and that wasn’t a platform that gave me joy. But then I discovered Unix, and the ideals of an Internet built by different folks along open standards. Linux and FreeBSD and the ideal that software should be as free (to inspect and modify) as possible. In the early days, most web sites, like this one, were just people writing up HTML markup by hand, later with tools. Blogs came along: get access to a server and run some software, and you can publish your own thoughts for the world to see. And people would subscribe in Google Reader.

Then the Internet took a dark turn. All the content got hoovered into The Walled Garden. I can understand. The Internet is complicated, and Facebook serves some compelling, predictable, fast content. Why leave the restaurant when a visit to McDonald’s is sure to engage you in petty squabbles punctuated with pictures of cats and grandkids?

Twitter is dying. It will shuffle along in a zombie state, perhaps indefinitely. For me, the walled gardens are just so much ping pong distraction candy. Put the engagement machine down, quiet the mind, and let the inner Creation flow.

I’ve signed up for Mastodon. I get more “engagement” than I did on Twitter, and then I get bored and put it away. The concept is Social Media built on Open Standards. Blogs with open standards, shrunk to a Twittery microblog essence. It is nice to be trying a New Thing, especially when that New Thing isn’t built to contain us all in some weird psychology experiment where we are the product.

Firing up the warp coils and testing https://wordpress.org/plugins/activitypub/ to see if a post from this blog pops up in the Federation at @dannyman@dannyman.toldme.com.