A Dutch Intersection … in Sunnyvale?

[I wrote this up in 2018 but never posted it. Since then, we have added bike lanes on Maude and approved bike lanes on Sunnyvale Ave. I think the contrasting approaches to street design are still really interesting. -danny]

I thought I would catch up on a little reading. I skimmed this article about an intersection in the Netherlands where a distributor road with bicycle lanes intersects smaller roads. The main road is similar in form and function to Maude between Mathilda and Fair Oaks: it is a local distributor with one lane in each direction and a speed limit of 30mph. The Dutch street has curb-separated bicycle lanes and no parking. Maude is slated to eventually receive bicycle lanes, and City Council decided to retain parking. 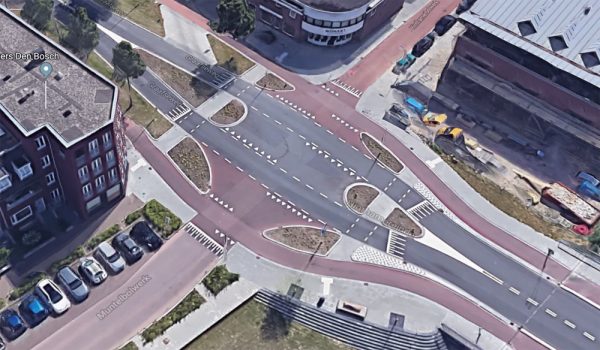 Graafseweg, as featured in Bicycle Dutch. This is what Maude might look like under Dutch design standards: bicycle lanes are buffered from traffic, and traffic lights are avoided in favor of clear markings and buffers for turning vehicles.

Here’s a look at these streets on a map.

Both streets pass through a residential neighborhood with small businesses. There’s a main road to the West, and most intersections with the collector road are Ts. Because the bicycle lanes and sidewalks are separated from Graafseweg by parkways, the Dutch road looks much bigger on the map. If you zoom down on the satellite view, the roads, especially the travel lanes, are comparable in size. If you drop street parking and narrow the parkways, this design could fit in the Maude corridor.

Here’s a rough overlay of the intersection of Graafseweg and Pater van Den Elsenstraat overlaid at Maude and Sunnyvale Ave.

The street itself lines up perfectly, but the park strip would need to be trimmed to fit. The first difference you notice is the absence of slip lanes, which Sunnyvale plans to remove from this intersection. (The Dutch intersection does have a slip lane on the lower right for bicycle traffic.) The next difference you notice is the absence of turn lanes. There is no signal in the Dutch intersection: vehicles turning left pull into a succession of buffer zones yielding to oncoming traffic.

One distinction from the Netherlands is that in California, without a signal, pedestrians have the right-of-way at intersections. In this Dutch intersection, bicycles and pedestrians have the right of way across Sunnyvale Ave but would be obliged to yield to traffic on Maude. You can parse this out by looking closely at the placement of “shark tooth” triangle markings on the pavement to see who is being told to yield. I don’t know if that would be allowed under existing state law.

If you look closely at the Dutch analog of Sunnyvale Ave, you see something very interesting.

Many wish to see a cycle track along Sunnyvale Ave, Sunnyvale’s principal North-South bicycle route. The Dutch street looks like a parkway, but the street to the left is a separate street. The street on the right is narrow and two-way. The bicycle lanes are just under 5′ wide, and between those lanes is a 15′ wide road for two-way traffic. The standard speed limit for this road would be 30mph, but drivers likely slow down because they don’t have much room to maneuver. Also, check out that sweet bus shelter! Compare this with the scene on Sunnyvale Ave at Hazelton. Can you spot the bus stop?

Yes, that mom has enough confidence in the safety of this street to have a young child riding on the back of her bicycle.

The Right-of-Way for these streets is comparable, but the Sunnyvale Ave roadway is 40′ wide. The Doctor Poelsstraat roadway is 25′ wide. The Dutch street still accommodates parking, but the overall experience is more pleasant: pedestrians can cross a narrower street, and the narrow street is a cue for drivers to slow down.

The Dutch have also found a convenient use for their wide, separated bicycle lanes: they can double as parking lanes! Let’s take another look at the Dutch version of Maude Ave.

The 10′ bike lane has car parking along the sides. The nearest car on the right is a reserved spot for a disabled resident. Maude is 50′ curb-to-curb and could fit a 20′ roadway, two 10′ bike lanes, and parking on one side of the street. Parking on both sides might fit at the cost of removed park strips or smaller lawns. The parking-versus-landscaping tradeoff could be made at the block level by local property owners.