It took a few days, a few hours each day, but I completed “day 2” of my first Steve Ramsey build: the Basic Mobile Workbench. 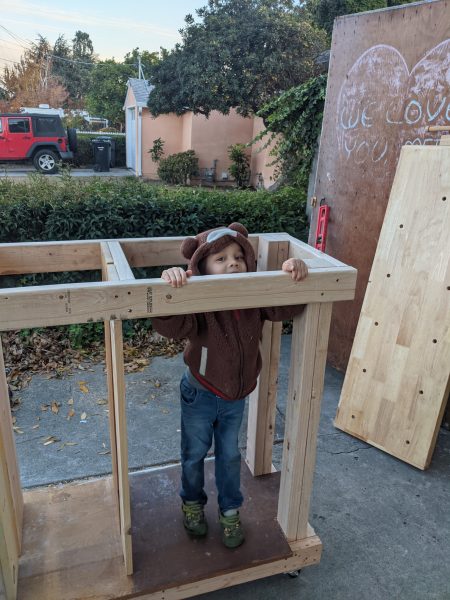 We keep the kids away from the power tools.

The first thing anyone notices is that my workbench is unusually tall. I built it to the same height I set my standing desk and so far, I like it. (I am unusually tall.) Instead of the hassle of wrestling a sheet of plywood and the intimidation of breaking up a sheet of plywood with a circular saw, I nibbled through a pile of wood that has been accumulating in my garage and spent some zen time cutting with a nice hand saw. (As Leah Bolden says: “you can do this!”) The bottom shelf was this old board that changes color and had a line drawn in a decent spot. I resized it with a handsaw and cut out the corners with a jigsaw. 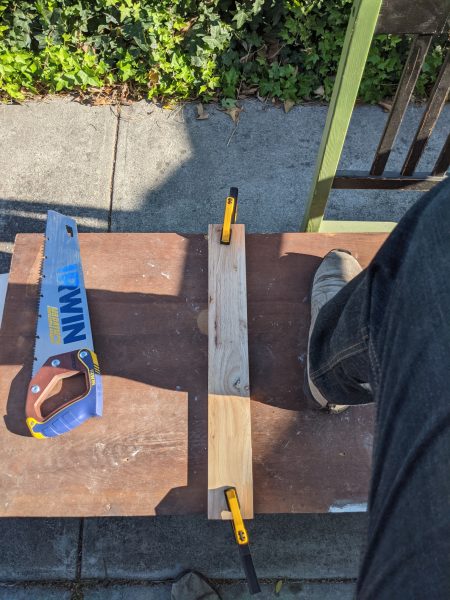 For the longest cut, I set up a simple jig.

I built the interior shelving with scrap wood. I had a lot of 1×12 laying around. For the shelves, I glued two 1×12 boards together. I don’t have a clamp wide enough for the job so I improvised with some bungee. Some of my 1x12s had a 1×2 lip tacked along the side, from a project I abandoned years ago. I thought I might preserve the lip for the shelving, but my first attempt to saw through the assembled pieces met with a nail. Good thing I was rocking the hand saw, I guess. 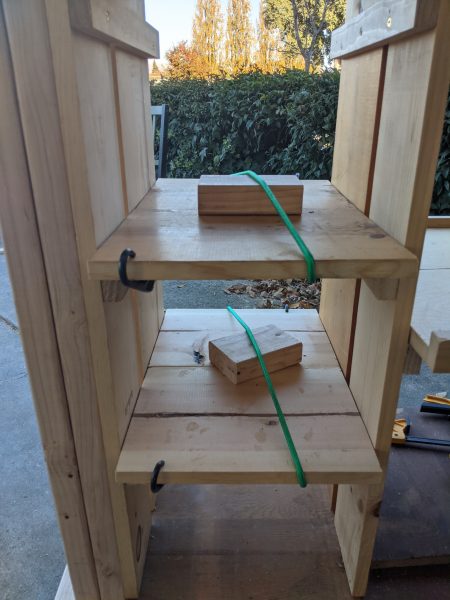 Some problems can be fixed with a Home Depot run, and sometimes you just have to improvise. The join here isn’t going to hold much weight, so this should work fine.

With the wider shelves, for one I used the remainder of the wood that I had used for the bottom plate, and for the other, I managed to retain the lip on some 1×12, and at the end discovered that the shelf slides out then angles and wedges in a nice spot to hold plans! 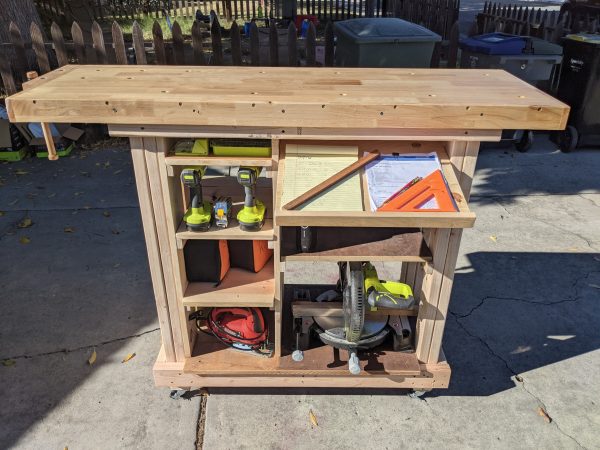 Part of the challenge is that my driveway and the garage are not flat or level. When doing the shelves I took to checking how “level” the bottom board was, then lined up the shelf supports based on that concept of level. Since they are drilled into end-grain, I took an old board that Tommy broke for taekwondo and used that to add a cross-grain buffer for the casters. I have no idea if this is wise or not. Since my floor is, shall we say, rugged, the basic casters from Steve’s plans feel rinky dink. Perhaps in the future, I’ll upgrade them. 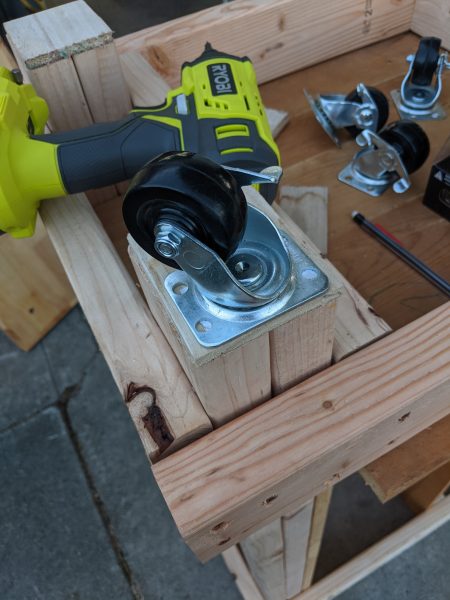 This little buffer place on the bottom of the leg may or may not ensure stability for the caster.

Next project: clean the garage out a little more so I can get started on Steve’s actual six-project course!