Feature request that certain JIRA dashboards should reload more frequently than every fifteen minutes. So, I cooked up some JavaScript to hide in the announcement banner:

Now users can add refresh=nn and the page will reload every nn seconds. This ought to work in most cases where you can sneak some HTML into a Web App.

May 21, 2013
Letters to The Man, Technology, Testimonials

I really really loved the Flickr interface and the new thing they rolled out today makes me feel like I have been punched in the gut. I added my voice to the torrent of objections in the forums at http://www.flickr.com/help/forum/en-us/72157633547442506/ 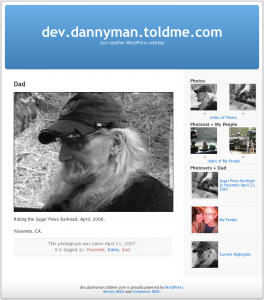 A test view of a plugin I wrote to view Flickr photos on a WordPress site.

Wow. It is hard even to add a post here.

I like that you could browse photos with annotations, click on a photo for a larger view, look over the metadata, &c . . . then click through the photostream or set.

Back when I joined in 2005 I was wary that Yahoo! might eventually do something stupid to what was really a very nice, well-designed interface for managing photos. My main assurance is that there would still be an API . . . I guess I will have to brush off the old API . . .

Really, you should give users the option to use the interface they like. This feels like instead of sitting down with users, seeing how they use the site, figuring out how to make it work better, you brought in some jackass designer who sighed that the site looks oh-so-2005, and decided to replace it with a mashup of Google Image Search (which is a terrible UI, by the way) and the Facebook header image (which wastes space at the top of screens which are getting shorter and wider but at least looks kind of neat.)

Please respect your existing users, many of us who have been paying you real, cash money for years now, and give us at least the option to enjoy the user interface we loved about your site.

Perforce: Move Files to a Subdirectory

Some quick notes. I wanted to move my existing *.py files for JIRA to a subdirectory. I had a bit of a time figuring this out, so maybe this will help someone when googling on the issue:

May 23, 2013
About Me, Biography, Technology, Testimonials

Earlier this week, Yahoo! unveiled a new and improved Flickr! !! A radical new redesign, which, while kind of slick to look at, totally steamrolls all the narrative features that many Flickr users like me love. Time will tell if Yahoo will backpedal enough to let us old-timers see our photos in the ways we like. Given that the new business model appears to be ditching the user subscription model for ads ads ads I am not optimistic.

Tommy smiles at his father photographer.

Enter Iperntity, a 7-person outfit in Cannes, FR which appears to have cloned the Flickr interface back in 2007 and have since moved in the direction of building it into a site where you not only manage and share your photos, but you can also write stories, and keep track of the friends you have on the site. Basically, a little outfit building something like Flickr into what Flickr might have become had Yahoo! not spent the past decade neglecting it. In a way, it is even giving us the core sharing features that people like about Facebook, without all the skeeviness. (Or … critical mass.)

So far, I like it. Like Flickr, it features an API, and since Yahoo this week induced a lot more demand for the site, the migration scripts and Collections feature are coming along.

My reactions so far:

I of course opted for their 3-month paid service. Once the Collections feature comes online then I reckon there is a very good chance I’ll migrate my data from Flickr and sign up for their two year plan.

It is just nice to discover that there is new technology waiting in the wings when the big megacorp decides to shoot its product in the foot.

You would think that turning a computer off would be a simple ask. But on my corporate laptop, Windows 7 is ever concerned that I am an idiot.

Me: Okay, we’re done. Shut down.
Windows 7: Okay. Hey, wait, some programs are still running.
Me: Kill them. Force shut down.
Windows 7: Bu-bu-bu-bu-buuuut you could lose your work!! Are you sure you want to shut down?
Me: Yes . . . I’m always sure . . . but thank you for your heartfelt concern.

(I do 98% of my work from Linux, which thinks shutting down is a grand idea.)

My Red State Relative Posted this to his Facebook Wall: 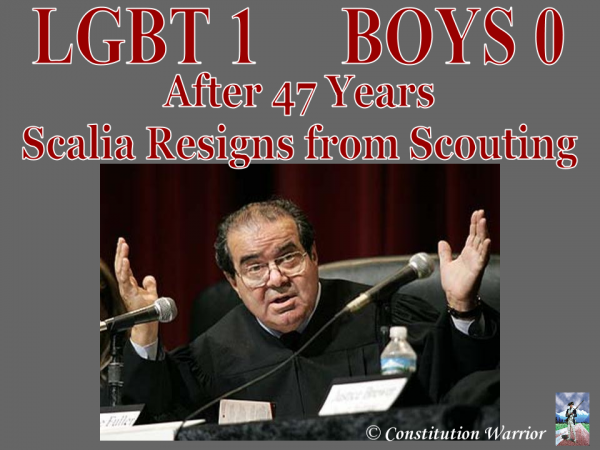 Justice Scalia quit his post in a terse resignation letter that read, in part:
“Some of the happiest memories of my adult life have been as a scoutmaster. Huddling under blankets around the campfire, and so forth. But now, all of that has been ruined. Ruined.”

I quipped that “if enough bigots quit they’ll have to start recruiting gay adult leaders.” To which my relative responded asking how I might feel about my son on a campout with the gays, or an alcoholic, and that safety, righteousness and common sense should prevail.

Turns out, this story is satire from the New Yorker, which makes it all the more delicious. I wrote back:

[Relative], I hope Tommy takes an interest in scouting, and I feel better to know that if he joins, he will not be denied the friendship of a fellow scout simply because one of them is gay. I hope they go camping together, and I know from first-hand experience that when Scouts exhibit a gross failure of ethical or moral conduct, their behavior is reported and disciplinary action is taken. (Like the boys who got expelled from the Scouts for shoplifting during a camping trip.)

And, for what it is worth, our Scoutmaster was a combat Veteran and a Recovering Alcoholic. He told some good stories that I think probably helped a few of us young men make smarter decisions in our adult lives. It was always hard to get a sufficient number of adults to join our outings, which is why I will be glad to see the eventual end of the exclusion of gay adult leaders.

I never made it to Eagle, but a friend of mine who did resigned his badge and sent the pin back to HQ because of the exclusion policy. I was really really proud that he would make a sacrifice for what he knew to be correct. A lot of Eagles have resigned their rank for the same reason. There’s even a blog at http://eaglebadges.tumblr.com/. It is nice to see those sacrifices have not been in vain.