“Even though bicycle commuting is on the rise all over the country, as cyclists we remain vulnerable. We’re like mammals in the waning days of the dinosaurs: far more adaptable and with much better long-term prospects, yet in the meantime still in imminent danger of being squashed.” 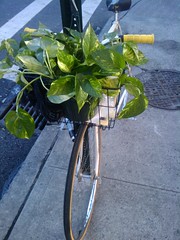 You’d imagine that at some point Americans would wake up to the fact that they’re being sold a very expensive illusion of safety that is in fact killing them and opt for practicality and efficiency over sheer size, but until that day there’s nothing illusory about city streets filled with light-running SUVs driven by a gentry who are more or less free to maim with impunity. And when it comes to cycling for transportation, the fact that your safety–indeed your very life–is not a consideration is what you might call a “barrier to entry.”

We all approach this barrier differently depending on our dispositions. Some of us hop it as adroitly as a cyclocross racer and ride undaunted. Others step over it with considerable trepidation, riding only occasionally or strictly for recreation. Still others simply go around it by opting for other modes of transport. And of course millions of people buy gigantic “safe” automobiles and just drive through the fucking thing while jockeying their smartphones, with two or three cyclists pinned to their bumpers.

As far as the larger-cars-are-safer myth: more massive vehicles need greater stopping distance to break or perform emergency maneuvers. Having more tons of metal surrounding you helps only if you assume you will get into an accident, possibly because your vehicle is bulky and awkward and you have a false sense of security which lowers your vigilance. Then you end up killing the other guy, in the smaller, more fuel-efficient car or bicycle. If you drive an SUV you get bonus points for driving a top-heavy vehicle vulnerable to flipping, which, as a light truck, is unencumbered by the Socialist mandate of rollover protection. Live free and die an avoidable fatality!