In Chicago you can sign up for a Chicago Card Plus, which is a plastic “proximity” card you keep in your wallet. To pass a fare gate or board a bus, you just touch your wallet against the sensor, et voila. When your account runs down it automatically charges another $20 from your credit card. I can log on to their web site and recover the forgotten password for my log-in name, access all of my account information, and a list of trips charged to my card in the last 90 days.

New York has a similar system, that will charge $45 to replenish your balance, but instead of a rugged plastic card they send you the same little piece of reinforced paper with a magnetic strip that is used for the 30 day pass. After a few months of pulling the card out of my wallet and swiping it at various fare gates the strip becomes worn and unreadable. Their web site has no way to recover the “PIN” code for the 13-digit account number they e-mailed to me several months ago, so I call their toll-free number, and after waiting on-hold they cancel the damaged card with a 15-day waiting period to issue a new card. 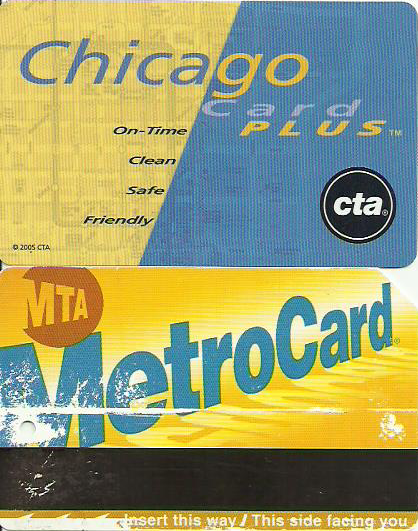 It somehow seems not worth it.

The part that makes me smile is the back of the card says EXPIRES 06/30/11 — someone at MTA has thought this little paper card would swipe for two years! Hooray for wishful thinking.