A comment I made on an e-mail thread that was well-received:

Intelligence is the product of basic brainpower, passion, and education. The brain is like a car engine: whether you have a little two-stroke or a V-12 you still aren’t going to get anywhere without some passion fuel, and the going will be really tough without some nice, smooth educational asphalt to help guide you to where you want to go.

Also, to those endlessly debating nature-versus-nurture, the answer is usually “both” . . . you start with a certain genetic baseline, then a childhood you don’t have much control over, and you make of your life what you will. Some folks receive a terrible start in life and are going to have it hard whatever they do, but most people have something they can work with, and with the right sort of ambition, positive attitude, and tenacity, can achieve some sort of success in life. 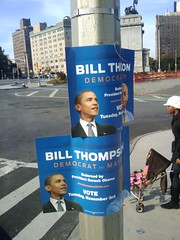 Here in New York City, there is a Democrat running a seemingly futile campaign against Mike Bloomberg. As far as I can tell the campaign platform is that Bloomberg is ambitious and power-hungry, with delusions of grandeur. Which, from what I can tell, must surely be a ringing indictment of character for the Mayor of Lake Woebegone, MN.

Anyway, His Holiness recently passed through town, bestowing upon Bloomberg’s Democrat opponent the ringing laurel of endorsement that his colleague was “in the house” . . . somewhere . . . they didn’t have time to meet . . . and then President Obama was off to New Jersey to stump hard for the governor there.

This morning the lamp posts in my black neighborhood are adorned with photographs of Barack Obama, who would surely be an awesome mayor . . . of Chicago.

Everyone is talking about Joel Spolsky, especially with his latest article.

Many appreciate what he has to say, but then again, he is basically articulating what we all know, and plenty figure that maybe his writing is no longer fresh, and he is just cranking out articles in order to shill his warez:

“This might be a neat opportunity to use Scrum. Once a week, the team gets together, in person or virtually, and reviews the previous weekâ€™s work. Then they decide which features and tasks to do over the next week. FogBugz would work great for tracking this . . .”

My position is that most stuff we read is mediocre, and Joel at least writes well, and Joel wears his ulterior motives on his sleeve, so when he starts figuring FogBugz can cure what ails CS curricula, I just figure “and now a word from our sponsors” and my brain hits the fast-forward button.

I think Tom actually has the best reaction to the issue Joel brings up, in that he adds that different people have different learning methods:

We all know there are students that are “visual learners”, “audio learners” and “kinesthetic” learners.

We all know what? Okay, yeah, and “everyone” is talking about this, right? Anyway, Tom, like me, is a learning-by-doing kind of guy who didn’t always “get” the formal CS curriculum:

When I took my undergraduate class on software engineering methodology I felt it was useless because I couldn’t see the point of most of what I was being taught. Most of my programming had been done solo or on a small team. I could not take seriously the problems that were being “fixed” by the software methodologies discussed in our lectures. “Code size estimation? Bah! Impossible, so why even try!”

In my CS days, the bits I enjoyed most were the learning-by-doing: compiling my first C program, bending my mind around recursion and functional programming to complete assignments in MIT Scheme, implementing a virtual spanning tree, and coming up on my own with the idea of a finite-state automaton to parse NWS weather forecasts. (Okay, that wasn’t a CS assignment and I didn’t know how to talk to girls.)

Uh, yeah. Anyway, what was I nattering on about? Joel’s schtick is that CS students aren’t taught to manage large, complex, “real world” projects with lots of moving pieces. CS mostly focuses on the “interesting 10%” like how you would sort a million integers and skips over the boring 90% of hard work like implementing the interface for the customer to provide their million integers and retrieve the results. And Mark Dennehy’s reaction was “of course we focus on the interesting ten percent: the other 90% is constantly changing and best learned on the job!”

But, addressing the “how do you tackle big projects” thing, I think Joel has a point. And his point isn’t new. The point is extra-curricular activity.

Whether you’re a visual learner or whatever, the biggest secret to learning things is to find the thing that you are studying interesting. The very best computer programmers are all fucking fascinated by the challenge of getting the computers to do things within given parameters. Computer programming is fun because when you get down to it, it is a lot like computer games: a person at the interface banging away until they get their dopamine fix by either beating the level boss or getting the damn thing to compile and spit out the correct result.

Well, that is for the learning-by-doing types. Some computer programmers get their jollies by trying to fathom a new and novel method of sorting one million integers. Whatever floats their boat, I guess.

Anyway, long story short, I’m thinking the learning-by-doing types tend to get a little queasy after a few CS theory classes and end up majoring in English in order to score a bachelors degree, but they keep tinkering with the computers along the way, and end up, like Tom and me, as systems administrators, figuring out the best way to keep 1,000 computers running in order to make it possible to sort billions of objects with map-reduce algorithms in constant time.

Oh yeah, and that I agree with Joel that motivated CS students ought to find non-class projects that they are passionate about, and thereby gain chances to collaborate with others on the sort of “real world” challenges that they are likely to face in their professional careers. Back at Illinois the ACM played a big role in this. I myself did some time apprenticing at NCSA and at an ISP, and the big win these days it would seem are the oodles of Open Source projects ready to put interested volunteers to work. And that’s why Google’s “Summer of Code” just sounds like a fantastically great idea.

Glorious Ranger confronts Ultraviolet Thunder over the danger a fish presents to a squirrel’s nuts.

Some people wonder at the recent Achewood story arc, in which Todd, a substance-abusing squirrel, attempts to “piss up a rope” and thereby triggers his transportation into a text adventure game in which he and Kim Jong-il together flee North Korea to found the “PEOPLE’S KINGDOM OF ECSTASY AND WRATH!”

So, leveraging my International Baccalaureate high school education, I explained:

He is riffing on a Latin American literary convention known as “magical realism” popularized in the English canon by translations of Gabriel Garcia Marquez.

An example of magical realism can be found in Marquez’ “One Hundred Years of Solitude” when the town of Macondo comes under an insomnia plague. At first, people don’t have to sleep, but then they realize they are losing their memories. So they start putting labels on things to remind them what what they are. And they put a big sign over the main road that says GOD EXISTS. In case one might forget.

In the context of magical realism, it is entirely reasonable that Todd should type with a stutter.