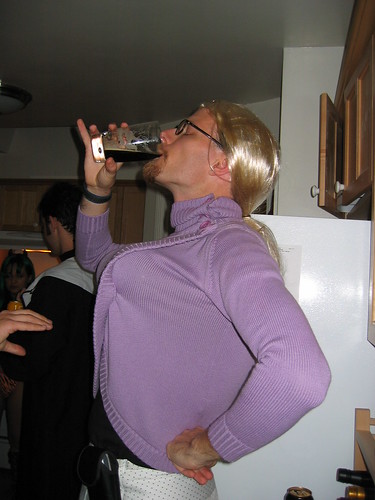 Well, I haven’t gotten around to throwing a housewarming party yet. The only other time I threw a party by myself was when I had some folks over for sushi back in Mountain View, 2000. It’s always been roommates or the wife to help me out. Anyway, when a lady on the Yelp talk boards expressed an interest in throwing a Halloween party, but her apartment was too small, I offered to co-host at my place. Well, she got the ball rolling, but had to bail. We had a great time anyway.

My costume was “thrift store drag queen” . . . kinda improvised but I did a pretty good job of putting together my feminine side. I felt a brief “oh my god what if the party is a dud” panic the week before, but as the day approached, well, things started to come together and the party itself was a great success! Probably around 40 people showed up. Nadia came out-of-costume and was coaxed into a “sexy nurse” ensemble that Lorah didn’t wear. Smashing! Ed took the cake, in my opinion, by dressing as boba tea.

Don brought grog, Karen brought pumpkin pie, Jenny brought a crew of Castro revellers from her own party. Everyone brought a bunch of fun, and then everyone cleared out at 1AM, many headed off to the Supper Club, and others carpooling home to get to work on Wednesday.

Cleanup was a breeze. I caught two beer spills, and all vomiting was confined to the toilet. I found a woman passed out on my bed and tucked her in comfortably on the couch.

I couldn’t have asked for a better experience!

As I wrote to my folks Tuesday morning:

[Here in San Francisco] they have these GIANT ballots in English, Chinese, and Spanish. Really neat! Its like a giant scantron, and it is somewhat gratifying to hold this huge five-pages of ballot in the blue secrecy folder between your hands and feel like maybe the participatory democracy thing is of some importance.

Proposition J: Shall it be city policy to call for the impeachment of President Bush and Vice President Cheney?

They also do ranked-choice voting for some municipal offices, though it was a bit silly because in both cases there was only one candidate running. I suppose a really enterprising citizen could have ranked in three write-in candidates and that crazy person would already be living here anyway.

This town certainly has its moments.

This morning I check in to see that Democrats have taken the House, and quite possibly the Senate as well.

And, it is not like I’m really impressed with the Democrats, and their fear of articulating some vision of a better America, but it is nice to see the system correcting itself a bit. The best wisdom I have heard is that at least now President Bush will have a check on his power, and he’ll have to behave a bit more like a President. It seems the process has already started, as the GOP has announced that Donald Rumsfeld is going to resign.

As far as impeaching Bush goes, I admit that is a silly ballot proposition for a municipal poll, but it is totally San Francisco, and it is a pleasing break from reading up on school bond proposals and sick leave. Unfortunately, they only had “yes” and “no” as options, I would have preferred “oh, hell yes!” (Though, I’m not sure how well that translates into Chinese.)

I try not to post entries that are total crap, but every time I see this /topic on one of the IRC channels I frequent, my soul giggles:

Pelosi: I’M IN UR HOUSE / IMPEACHIN UR D00DZ

Thanks, saul! (Well, saul says he got it from boingboing.)

And, thanks, America, for providing us with this entertaining possibility.

There’s standing in a subway car at the end, or near a door, with something to lean on.

There’s standing in the middle of a subway car, holding a rail.

There’s standing in a subway car that is so packed you don’t really need to worry about holding on. My ride home on Halloween was like this, until the costumed throngs got off at Castro.

Then there’s standing in a subway car that is so packed that you really don’t need to worry about holding on, and the air conditioning is broken.

I got off at Church Street when the subway car started to pack this way.

I left reluctantly. I left behind the guitar player who was taking up two seats, one for his case, as he quietly practiced a mellow tune, and the woman, sitting across the aisle from him, studying his fingers on the strings, and the lady with the four kids, who were told to hold on because sometimes the subway jerks, and the story was told of one kid who had been playing around and earned a cracked lip for his trouble. A middle-aged lady invited one of the children to sit on her lap.

I waited a few minutes for the next train: air conditioned, not packed, and lacking in human interest.

Update: Indulge your eyes with a trip into the realm of the spirits that surround us every day.

Since July, I have been working at Yelp, a hip young Internet startup located just South-of-Market in San Francisco. We provide an Internet-based Yellow Pages service that is really cool because along with basic business information, you can see reviews written by other customers, which gives you a better “feel” for a place when you’re figuring out where to go.

Now, this has been done before, but one of the things we’ve done really well is to help build a community spirit among the folks who write reviews on our web site. These “Yelpers” tend to be young, urban professionals who enjoy going out, and they enjoy writing about their experiences: the good, the bad, the funny, the odd. They socialize on our message boards, meet up for weekly happy hours, and we invite the “Elite” members to spectacular parties every couple of months.

I am a fan. It is more rewarding to work at a company whose service I enjoy!

Anyhow, the reason I am writing just now is to see if anyone who reads my blog is, or knows, a good Unix SysAdmin, or perhaps a great Object-Oriented web developer. The Unix position requires a senior-level, well-rounded generalist who is comfortable with Linux, tiered network infrastructure, and a the variety of challenges offered by a rapidly-growing startup. The web developer should know how to build awesome web sites, while talking to a MySQL database efficiently. There will be further detail posted online, but I would be happy to talk to friends about these positions, especially the SysAdmin, with whom I will be working very closely.

(Anyway, back to the variety of challenges on my plate for the day.)

November 21, 2006
About Me, Relationship Advice

I have a love-hate relationship with condoms.

I love worrying less about STDs and unplanned pregancy.

On the other hand, they require a bit of “planning ahead” so that you will not be caught unprepared with your pants down. When you do have them handy, hopefully they are close enough that you will not have to leave the embrace of your partner, hopefully your slippery fingers will find a corner of the packaging amenable to tearing, hopefully you will feel out the appropriate orientation so you don’t waste your effort trying to unroll the thing backwards, and hopefully you’ll pull it all off–err on–quickly enough to minimize the mood-killing time spent away from your lover fiddling with modern packaging.

Then–and while you’re not supposed to tell the skeptical teenagers this–although one might take pride at having managed the condom maneuver well, the physical sensations that ensue are never of the caliber found without a condom. One swallows these modest tragedies for the sake of engaging in quality lovemaking, but wouldn’t it be nice if condoms were somehow better?

Build a better mousetrap . . . alas, build a better condom, and the Internet will beat a path to your door. Pronto condoms has recorded nearly a million hits on their web counter: they have just launched a condom in South Africa with special packaging designed to make it easier to “get it on.” The demonstration video brought a moment of joy to my heart, because at last, the powers-that-be are thinking of people like me and trying to make my sex life better!

All the same, I will be truly impressed when they get that down to a one-handed maneuver. And even with this bit of innovation, there is still plenty of room for improvement for the world’s most popular prophylactic technology! A brighter future awaits! Let us get it goin’ on!

For production systems, I think it is best to use a single, centralized /etc/crontab, which simplifies the job of tracking batch processes. On a production system, batch scripts should be sufficiently robust such that if they are resource or lock-intensive, they make sure everything is okay before they get to work. Stuff like user crons and fcrontab can live in your development and corporate servers.

Of course, sometimes you inherit production systems with people who don’t think like you do. You’ll need to review what random user crons are running on each system. With any luck you’ll have a sane OS that keeps the user crontabs in a well-documented location. (FreeBSD? /var/cron/tabs . . . SuSE . . . still not sure . . .) Of course, luck is a fickle mistress, and sometimes you have to do it the evil way:

If you are borrowing my “recipe” you will likely want to put your e-mail address where it says $USER . . . and, you may have to do the same for fcron as well. Bah!