“Atheists are suing the Utah Highway Patrol to remove roadside crosses erected to honor fallen officers. At issue are 14 12-foot-high crosses, each bearing the name of an officer killed in the line of duty. All the fallen officers were Christian, and their families are unanimously opposed to the crosses’ removal.” 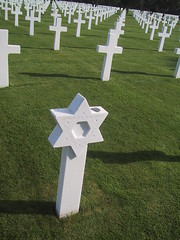 The Star of David is found among a sea of Crosses, as a memorial for Americans who died to free France from tyranny.

This got me excited. I mean, I’m an Atheist, and I don’t mind calling a Christmas Tree a Christmas Tree, but I think it is ridiculous that the AFA were boycotting Target and other stores because they were referring to The Holidays as The Holidays, and not, as Jesus intended, “Christmas.”

But, I think, if someone dies, and they’re Christian, it is only proper to honor them with a cross, even if their employer is a government agency. As long as they’d give a similar, religion-appropriate monument to a non-Christian officer, right?

So I said “Ah, the Atheists are running amok. I should do my part and ask my people not to be silly.” So, I dialed up the American Atheists web site:

[The Utah State] Transportation Department has a specific regulation prohibiting the placement of religious symbols and shrines on or adjacent to any public highway. It is also state policy to remove the illegal memorials. Citizens may place wildflowers along a road, however, get involved in the Adapt-A-Highway program, or sponsor a “memorial sign” with a secular safety message like “Drowsy Driving Kills.”

The several Christian crosses referred to in the Atheist lawsuit were erected by the Utah Highway Patrol Association beginning in the early 1990s. The group is a private, nonprofit organization with the goal of “supporting Utah State Highway Patrol Officers and acknowledging these troopers’ service to the people of the State of Utah.” It has also been granted the use of the official Utah Highway Patrol logo, which is placed conspicuously on the 12-foot-high crosses.

The deseretnews.com has a picture of one of the crosses.

Okay, well, this clouds the issue, doesn’t it? A private party is being granted an exception to the rules, and the crosses have the government’s logo on them. That last part is the tricky part. A cross by the highway, on public land, even if its not allowed? I could dig that. A cross that has a government logo on it? That’s . . . well, that is the State respecting an establishment of Religion. That’s a no-go.

I think there’s two ways out of this . . . the highway department should either change their rules or enforce their rules. We respect cops, right? I mean, they put themselves at risk to enforce our laws. So, why would we break the rules for cops? So, if one memorial is alright, other memorials should be allowed. But, religious memorials should not have the logo of government agencies affixed to them. Did the Utah Highway Patrol die for our sins? No. Perhaps the honorable fallen officer–yes, put his name on the cross–but don’t confuse Jesus and The Highway Patrol, right?