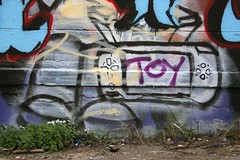 In Sony’s defense, they are renting the walls that they are defacing:

Coming on the heels of widely publicized news that Sony music CDs infected customers’ computers with security-hole-inducing spyware, Sony has hired graffiti artists in major urban areas to spray-paint buildings with simple, totemic images of kids playing with the [PSP].

Corporations who think they have Street Cred are kind of lame an awkward, like White People who think they can Rap. I’ll grant you, there may be a Corporate analog to Eminem, but it aint Sony.