I think my mom once said that she tried to send money to one charity a week. I thought “hey, that’s a neat idea.” So, I tend to cut checks . . .

. . . but, honestly, I’m sick and tired of the massive volumes of direct mail I receive as a consequence of my good intentions. My favorite are the environmental charities that send me mailing labels . . . I have like 6zillion mailing labels already, right? So, let’s kill s’more trees. 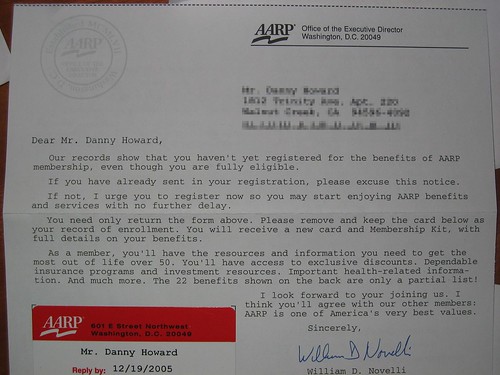 Our records show that you haven’t yet registered for the benefits of AARP membership, even though you are fully eligible.

My goodness! I’m turning thirty next month, sure, and I’d like to retire early, but this is ridiculous! I vaguely recall that charities like to target old people, because there are a lot of old folks with money they aren’t spending, some of them dabbling in dementia, who will accept an envelope, write a check for $10 or $20, and mail it back. Much as people who eat McDonald’s three times a week are seen as commercially valuable “heavy users,” these well-meaning naive old people are understood to be an important source of charitable contributions. And this AARP stuff makes me think I have been profiled by the Charitable Industrial Complex as a “well meaning naive old person.”

But I’m really more of an asshole: 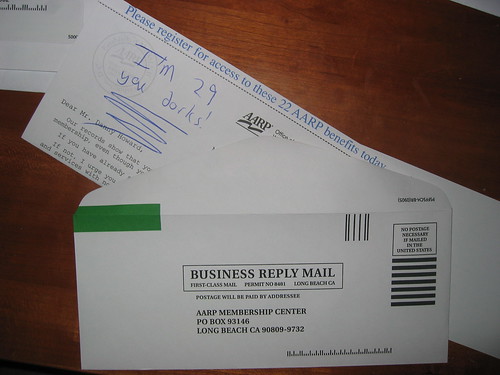 I take that business-reply envelope, and send it right back. They want to pay for my name? They want to send me spam? Well, they can pay to take it back. I ripped up an offer from the nature conservancy, and mailed that back, coated in return-address labels that I just don’t need, because I have several hundred from charities, including two or three sets from the nature conservancy, already. Jeezits! No more charity!

Well, with some exceptions . . . The Sierra Club, Habitat for Humanity, and . . . my current favorite, the Miramonte High School ABE (A Better Education) club. What’s that? It is a club at the local high school that has a connection with the Moi High School, which educates students in the Kasigau region of Kenya. I cut them a check for $300, and every last penny of that goes to cover tuition, room, and board, for a young person who has more potential than money. It feels good. It feels really good, just to think about that. 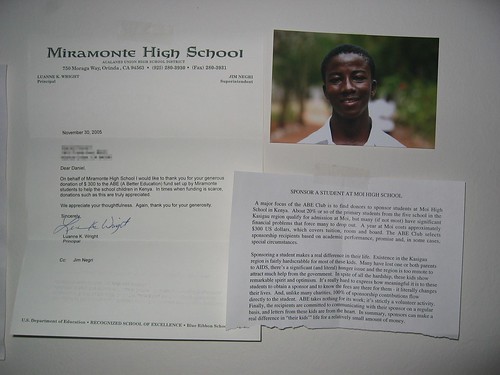 And the best part? No return address labels. I might receive a thank you letter from Kenya, which will be very cool. (I have a “please sponsor me” letter that he wrote in July.) But . . . no spam . . . no flocks of letters clogging my mailbox and recycling . . . just, some young guy has hopefully a better chance at doing something good with his life.

Next: Gilmore v. Gonzales
Previous: Google Recuiting Secret
Categories: About Me, Letters to The Man