Well, I have heard time and time again, and experienced myself, that getting a job at Google is a long, slow, frustratingly mysterious process that takes weeks, if not months, in most cases. Typically, you’ll submit a resume for a position, get called two months later for an entirely different position, get a phone screen, then two weeks later get another phone screen, or maybe an on-site, but they’re still not sure, so you’ll get another interview, and each time there’s a week or two delay until the recruiters and hiring managers can complete their meetings, and before they can send you a job offer, your case will be reviewed by Larry and Sergey.

They are very very careful to hire only the very best and brightest. I think it was Marc Andreeson who said that if you start hiring sucky people, they will go and hire more sucky people, and ultimately they will all conspire to destroy your organization. Back at Tellme, we were told to only ever hire people we thought were smarter than ourselves, but that seemed problematic, given that a lot of the first few employees were from MIT. 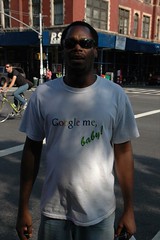 Does he love Google enough?
(Thanks, BitBoy)

But there is a shortcut to the Googleplex, if you follow the Official Google Blog. The secret? Replace your cover letter with a “love note” explaining how, unlike everyone else, you actually worship Google so much that you have a Google tee-shirt. Then, go surfing in Mexico. Then, when you return you’ll immediately get a phone screen, followed the next day by an on-site interview, followed the next day by a job offer.

I would like to think that Trisha Weir got hired because she was exceptionally skilled. A colleague who has spent some time within the ‘plex hypothesized that Google’s ideal employees are smart people who are sufficiently insecure that they will work hard to prove themselves. It seems that Trisha knows her stuff, and she was willing to demonstrate fanatical loyalty up front, and maybe they really needed to fill that position immediately.

One of these people works at Yahoo! Can you spot which one?
(Thanks, TedsBlog)

To be fair, I once scored a job the same way: I was really impressed with the customer service at EnterAct, an ISP in Chicago in the mid 1990s. I wrote in saying that they rocked and that I’d love to help and learn, and asked if they’d hire me as a summer intern. Got the job. And while EnterAct was a lot less picky about who they hired than Google, there’s a good expression to bear in mind:

Find work that you love so much that you’d do it for free.
And do it well enough that someone will pay you anyway.

The secret is love. Or, at least love notes. Or, especially if you’re looking at Google, getting a tee-shirt ahead of time so that you’ll look like a good “culture fit” at the on-site. (When I visited, it seemed that about 1/3 of Google employees were wearing Google tee-shirts. :)