Reverse Engineering is the Sincerest Form of Flattery

I was cleaning out the spam trap today, when I stumbled on a link from Aaron Fischer.

Hrmmm. Does this seem at all familiar to you? Maybe? Just a little? His top index page reveals the influence of a superior web designer too.

I love you, Aaron! Now publish an RSS feed so I can follow you in my aggregator! 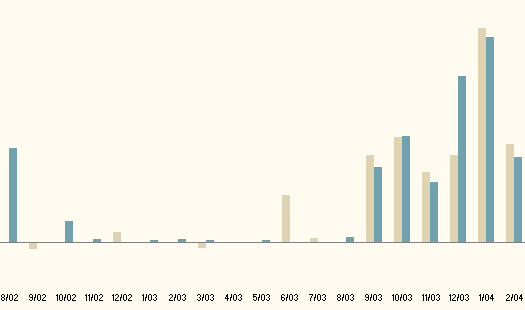 Yeah, kind of extremely flat there in the middle. I just started started using Quicken in July 2002, when I saw a major income spike from severance pay that helped tide me over for the next six months of world adventuring. Then it was back to America, and only this past December did I land a middle-class income, incurring some credit card debt on new home furnishings.

Not as responsible as Aaron, but I have my good times.

I’m still kind of freaked out that I have a job. And that despite my misgivings, I’m actually digging the gig much more than not. And, it is really damned nice to have my own place, and a girl to share it with. Too bad she’s allergic to Cats, but then Jordan’s been letting his kitten run around the office during the day, so that he’ll be less hyper at night.

Next: Dennis Kucinich is a Tofu-Eatin’ LIBERAL!
Previous: Point, Click, and Kill: What is Humanity?
Categories: Unsorted