This is a video clip that’s been raging around the Internet the past few days. It is a one-minute clip from an Apache helicopter, shot from the sights of a night-vision gun. In it, you hear one man giving instructions to the gun operator, who tracks down three moving figures, squeezes the trigger, and blows each one into a great big mess on the sand.

I’d have warned you that it was graphic, but aside from the fact that the figures going splat are actual human beings, it is nowhere near as graphic as a kid’s video game.

Welcome to future warfare. Now, even men are glowing blips on a video screen. Configure your weapon, spot your enemy, point, and click.

I got a thrill out of watching this video, because it is educational. I’m not living in the sandy, gritty, heat and cold and cultural alienation and homesickness and constant fear of death that my countrymen are going through over there, and I have even less of a chance to really understand the Iraqi experience over there, but I appreciate … knowing. Seeing a little bit, of what it is like. It gives me a chance … to wonder, what is that guy behind the video screen, pointing the weapon and clicking away the lives of his enemy, what is he going to go through later?

There’s a big, and old, and to many people, a tired debate in this country over what constitutes a human life. This is the abortion debate. Many of the same people who adamantly advocate the humanity of even the smallest collection of cells, gestating embryonically inside a woman’s uterus, are the same people who support the subsequent murder of convicted criminals, who may even feel a sense of righteousness at a video like the one above. The philosophy is that human life is sacred until it has proven itself to be evil. Only then, may we exterminate it, and in doing so, we can take pleasure in eliminating evil.

But I don’t think that way. To me, every human being is a source of potential. Potential good, and potential evil. An embryonic human? A fetus? Its potential is based in large part upon the determination and capacity of its birth parents. The potential is infinite, but the investment is also small. I feel uncomfortable at the thought of abortion, but morally, I can accept the idea that it is better to back out before you embark down a difficult road you are ill-prepared for. In the old days mothers and communities that could not accept the burden of the newborn dispatched with the baby soon after birth. Abortion is the modern equivalent, for a world that remains imperfect, where the new being is smaller, even less identifiably human. We erase potential. We erase life, before it has happened.

But the debate wears on. Was that baby a human being?

And the debate wears on. Was that blip on the screen a human being?

Or was it an arbitrary, non-human arrangement of cells, which for some unfortunate accident found itself trying to kill our human beings, and had to be aborted?

Are the murderers on death row, are they human beings? (Well, there’s the harder question of whether they’re even murderers, and would they have made it to the executioner’s hall had they been wearing another color of human skin.)

Are they human only before death? Are they human even after they’ve ceased to be alive? Is the embalmed corpse, cold to the touch, in the casket, human? What of the steaming streaks of entrails in the sand?

We know why we kill convicted murderers, and we know why we kill enemy soldiers, but from a video console from far away, these recipients of our justice are no more than abstractions to us. How many inmates awaiting execution have any one of us known, face to face, in a human capacity? How many idealistic, or just plain confused, and desperate guerilla warriors have any of us known? They remain just as unknown to us as the babies who are never born. We must trust that to others, they were human beings.

A big problem is, we’re hung up on this question of abortion, and we’re rolling along full steam into the DNA age. We are already changing the cellular blueprints of living cells, and designing altered organisms. We have a debate on the legality of using “stem cells” … human cells that can grow into any other human cell, because they come from the process of conception. But if these same stem cells come from bone marrow, that’s okay, because bone marrow doesn’t normally grow into a baby … though it probably could, under the right circumstances … is a fetus that is not itself the product of conception a human?

It gets worse. We’re working on the transgenic pigs … pigs grown under very careful conditions, because they are pigs who have bits of human DNA in their own pig DNA, and these pigs are conceived, birthed, fed, grown and killed, not for their delicious pig bacon, but to harvest their organs, which thanks to their hybrid, human DNA, can be used to replace the failing organs in a human being. Are these pigs human?

But, wait, it will get even worse. We currently train intelligent animals, including dogs, dolphins, and our primate cousins, to assist us in ways in which they are uniquely capable. Some dogs lead the blind, or sniff for contraband. Dolphins are able to spot and tag explosive mines underneath the water. Some species of monkeys are trained as service animals, who help humans with physical limitations to get through their day, by opening the fridge and whatnot. Let us not also not forget the innumerable animals currently confined to laboratories, which are using them as test subjects that will educate us on the dangers of the world, and potential medical practices to improve our survival. Any number of these creatures might serve their function better with a little human DNA. Once upon a time we marked black people as non-human, so that they could labor in the brutal heat of the southern fields, growing sugar and cotton in the worst of conditions. What will we make of some future race of especially intelligent gorillas, designed, “manufactured” and marketed as companion animals, who may have sufficient aptitude to drive the car, perhaps fix it, or work in factories. Are they human? What if we design them without human DNA, but they have sufficient intelligence to do our taxes?

We’ve got plenty of work cut out for our philosophers.

I had a minor epiphany in Thailand. I walked into an American-style shopping mall. It felt like any store in America, except that every five feet, peppered through the merchandise, was an employee. How can they afford so many employees? Because labor expenses are low. There’s a question of supply and demand … the most alien thing for me about Thailand was the population density in Bangkok. I come from one of the largest cities in the United States, but what passes for a crowd in the U.S.A. with its mere 280 million human beings, aint as impressive as New Years Eve in Bangkok, where getting off the Sky Train, I was in a mind-boggling human gridlock, that started a few feet from the train platform, that took me half an hour to walk a block to my destination.

Someone remarked on Colin Quinn the other night that “sure, the Middle East is full of Weapons of Mass Destruction — they’re called Arabs.” I attended the lecture of a Neoconservative “Objectivist” last year in California. He explained that the solution to the War on Terror was to eliminate Radical Islamists. This meant that we had to invade not only Afghanistan, but Iraq, Syria, Pakistan, Saudi Arabia, and anywhere else there were Islamic Radicals, figure out which people were predisposed to killing us, and kill them first. Aside from the logistical problem of scale, the real problem I have with this strategy is that, well, you just don’t know who is, or who would be, a Radical Islamist. If the roles were reversed, which among us would be the suicide bomber? And just what would it take to bring us to such an act? 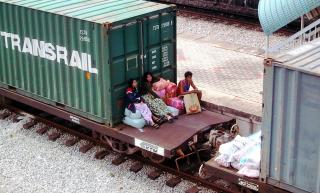 Human potential: where are you going to go today? These folks are hopping a freight across the Malay-Thai border.

I looked around, when I was in Eastern Asia, agape at the density … the sea of people. The amount of life surrounding me. And I had just passed through Jordan, a poor, easy-going Arab country, sandwiched between Israel, Saudi Arabia, Syria, and Iraq. I travelled in Southern Thailand and briefly crossed the Malaysian border. Muslim territory, where the women wore scarves on their heads. I wondered at the people I met, the people that passed before me, the infinite seperate stories, and I wondered how does Thailand provide for all its people? How does China provide for all its people? Japan is very crowded, with limited resources, but they are one of the most successful nations on Earth. In contrast, how do we do in America? How do they do in Afghanistan, mess of a nation that it is. How are they doing in Arabia?

The key is potential. If you have humans, they could go either way, or both. A woman can be both mother and suicide bomber. All these humans, spinning off in their various directions, could go either way. We can be saints, and we can be monsters, devoid of what the rest of us understand as “humanity” … and it is a matter of potential … we are what is made of us. If we can not give our gestating baby humanity, then we will not have a baby. And whether we have babies or not, we must reassure the rest of us that the humanity in each of us, the good, is more valued than the inhumanity, and the evil. Whomever operated that gun in that Apache, had to call on their inhuman capabilities, their capacity for evil, to kill three more humans who were themselves, as best as we can tell, operating from that same evil. Each evil was done in the service of a larger perceived good. We murder to make the world a better place.

But at the end of the day, we each have to live with our humanity, and our inhumanity …

Maybe I should just stay away from videos.