We ended up on a packed commuter bus back, and my presence on the bus through the slow chaos of Amman’s rush-hour traffic seemed an amusing novelty to the other passengers, some of whom offered me their seats, which I thankfully declined. We hung out at Rannoush, the restaurant he’d taken me to on our first night together, which his cousin runs. Fauzi wanted to head out of town to another cousin’s place for iftar, and from there to the airport at 7, when he had to go to work. I spent some effort trying to explain that if we could drop my bag off at Royal Jordanian’s office at Seventh Circle, I’d really appreciate it, because then I wouldn’t have to drag my bag to his cousin’s house and then to the airport, and on top of it all, I could check-in and reserve a nice seat on the airplane. But did this work out, logistically, with also getting to his Uncle’s house?

That Fauzi kept interpreting my “7th circle” to mean “7 pm” underscores the difficulty involved in trying to express this complicated query. With the help of some diagrams, and Rannoush’s proprietor, who spoke a bit more English, Fauzi agreed that seventh circle sounded like an awfully good idea. So, we would head over to the hotel, and grab my bag.

Except then Fauzi wanted to call his Uncle to explain that we wouldn’t be able to make it. So … I tried again … Fauzi … we can get my bag and then go to your Uncle’s and skip the seventh circle if it is out of the way … ?

At the hotel, Fauzi explained that he had to run over to his place, can I hustle back and meet him at Rannoush? Okay, but first let’s go to the hotel’s reception desk together, and they can probably interpret for me what you needed the twenty dinars for … oh no, that’s just for today, I’ll give it back at my Uncle’s house. … well, okay then, I’ll see you at Rannoush. 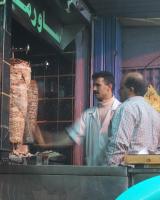 Rannoush’s cook slices meat, to prepare for the evening rush.

I hung out with Fauzi’s cousin, who was preparing the place for the iftar rush. His cook sliced the kebab, preparing schwarma to go. Rannoush is between a bus depot and a service-taxi depot, so they do a brisk business with the working men who break fast on the go. He offered me some food, and was pleased when I declined, explaining that it was no great burden for me to wait a bit longer like everyone else for the sun to set. I was a little anxious about my shortage of dinars after Fauzi’s loan this morning, and as we waited for Fauzi to return, his cousin confirmed my impression of Fauzi that while he has a “white heart” he is sometimes not the sharpest knife in the drawer. I prefer to attribute difficulties to ignorance before malice, the ignorance in our case compounded by language and cultural differences.

Fauzi returned pretty late, at which point we did not take off for his Uncle’s place. I guess it was too late for that, which was fine with me because I’d worked up an appetite for schwarma and fries, washed down with a fruit cocktail smoothy, compliments of Rannoush.

Next: A Ride to the Airport
Previous: Amman Courthouse
Categories: Jordan, Travels