A Ride to the Airport

It was getting near 6. Time to catch a bus to the other bus depot, where the Airport Express leaves from. Of course, I could have hung around Amman a few more hours, and caught a free Royal Jordanian shuttle from seventh circle as late as 10PM, since my flight wasn’t scheduled until one or two in the morning, but I didn’t mind dropping JD 1.50 on the Airport Express to ride with Fauzi.

Fauzi then asked me for another 5JD. He’d asked for 5JD to get on the bus for Jerash which shouldn’t have cost more than 2JD, even if I was covering Fauzi as well, or a round trip which we didn’t take. The cross-town bus fare wouldn’t have been more than half a dinar apiece, so I explained to Fauzi that this was my last 5JD, you see, after which I’ve only a 2JD to pay for the Airport Express. See?

But 5JD was too much, so Fauzi bought a pair of candy bars to get bus change. One for each of us … 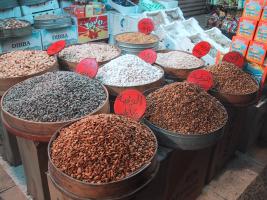 I saw this at the bus depot and thought that if I worked for National Geographic, this is the classic sort of picture I would take, so I took it. I don’t know what this stuff is or what I’d do with it, but I love the picture.

Now … which bus? This question shouldn’t have been so hard, but if Fauzi was pressed to get to work on time, maybe he wanted to get clever with the routing. We caught a bus that dropped us off out at some traffic circle that was not the depot for the Airport Express, where we walked over to a bus stop on the road to the airport, watching various other airport buses go by, but not ours.

Eventually, a service taxi stopped and Fauzi said we could take it. “How much,” I asked Fauzi, since I only had the 2JD on me.

Now, this is awfully cheap for a ride to the airport, where service taxis don’t go, though I’m still not quite sure why service taxis are cheaper than regular taxis, so 3JD was not entirely implausible. “But Fauzi, I only have two JD.” Fauzi stumbled a moment, and then said okay, which I took to mean that he’d cover the rest, which only seemed fair anyway considering that he was ahead at least that much after the five at the bus station.

The ride to the airport was pretty pleasant, speeding smoothly down the highway. Along the way I passed my 2JD over to Fauzi, so that whether the fare was 3JD total, or 3JD a head, he could take care of things when we got out. On our way into the airport the driver stopped to solicit a 10JD ride into Amman to a trio of Chinese businessmen, who politely declined. Soon after he dropped us off at the terminal, and asked for his 5JD. Fauzi handed him my two, and the cabbie got upset with him, alleging that Fauzi had mis-quoted to me, or at best mis-heard the agreed-upon fare, which was 5JD, which was really good considering that he normally charged 10JD. Fauzi, the cabbie declared, was no good, and at this point in the game, I was inclined to agree.

What I should have done at this point, was to sweetly ask, in the presence of this somewhat bi-lingual cabbie, “Fauzi, what of the 5JD I gave you at the bus station?” After all, even if we weren’t splitting the 5JD fare, Fauzi would reasonably expect to have 1.5JD budgeted for the Airport Express, and he was at this point taking no initiative to fix what seemed an awfully big problem.

Even though at this point I was really dubious of Fauzi’s intentions, there must be some Asian ghost in me who wanted to see my frustratingly hapless “friend” not lose face, and restore harmony between us and the cab driver. I offered the cabbie the 5€ that I’d saved by using my train pass to get to Frankfurt airport. At about .7€ to the JD, 5€, 2JD should work out. The cabbie agreed to take this payment.

At this point in the game, I was pretty upset with Fauzi. Jordan has a reputation for simple hospitality rather than sophisticated cons, which is what I’m supposed be wary of in Thailand. “Never attribute to malice what can be explained by stupidity,” I quietly reminded myself yet again. The best understanding I have of the situation is that perhaps Fauzi had some other trouble going on, and we didn’t make it to his Uncle’s house, which left him to abuse our friendship. Poop happens.