More Than I Bargained For

At Queen Aliyah, I cashed an American Express Traveler’s Check for $50 US into 35 Jordanian Dinars, minus the three dinars commission. This was to pay the 10JD fee for entry visa. Once I was admitted, I had to wander through the airport, looking for the Airport Express bus, which charged 1.5D to get to Amman, which is a lot less than what a cab would have cost.

On the bus I was befriended by two young Jordanians, Fauzi and Mohammed. From the bus station in Amman, I found myself in a cab full of Jordanian men, welcoming me to Jordan, showing me a few sights. The cabbie stopped in front of a hotel that he wanted me to check out. No, I insisted on the Farah Hotel that I’d picked out of Lonely Planet. Fauzi and Mohammed accompanied me there, as Fauzi wanted to grab a meal together. This struck me as weird, but harmless, so I dropped my stuff off upstairs and joined a couple of locals for some meandering through Amman at night.

I offered that I was actually pretty well-fed from the airplane. Maybe just some coffee?

Fauzi grabbed some coffees at a corner vendor. We walked along, carefully crossing the street to find ourselves next to the Roman ampitheatre, which was closed off for the evening, but it was impressive anyway. Fauzi took us to a restaurant called Rannoush on the far end of the nearby service taxi depot, where he had a pair of burgers and fries, and the three of us had fruit smoothies, which they called cocktails. As with the coffee, my readiness to pay was declined: Jordanians welcome strangers.

A little ways past 10 PM it was getting chilly and I was ready to get back to the hotel and rest. For much of the night I listened politely to long exchanges in Arabic, taking the surrounding chaos in. The restaurant was run by Fauzi’s cousin, and another cousin showed up who spoke some pretty good English.

We made our way over to a beat-up old Honda, which came to life by manipulating some loose wires inside the dash, but only started after rolling downhill a bit, allowing the driver to pop the clutch.

I hadn’t expressed my inclination to head back yet, I just figured that we were heading back toward the hotel. In reality, we just joy-rode around awhile, as young men tend to do when they find that they have a car on their hands for a change. I could dig it. We returned to where we had started, hanging out around the service taxi depot. When I expressed that I was getting chilly, Fauzi took off his American-made jacket for me to wear. 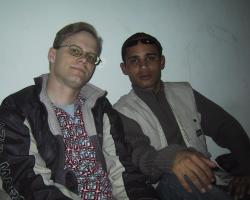 Sporting his jacket, Fauzi and I pose for a picture.

Another joy-ride later, during which the driver’s door fell open at one point, and we climbed a few steps to a dirt path to the driver’s place, and found ourselves in a large room furnished with nice mattresses, pillows, and blankets. We hung out for awhile, and I was invited to stay the night, we could drive back to the hotel, get my stuff, and stay with my new friends. I had no trouble trusting this group, but I was not eager to give up the comfort and familiarity of hotel customs and culture for the weirdness of staying in authentic Jordanian housing with my new friends that I had trouble communicating with.

Around 2:30 we went back out to the car, and got it working by popping the clutch in reverse. I have always been curious if you could do that. Some guys pulled up in a white mini-bus and engaged my friends in a long argument in Arabic, which sounded like it might have something to do with the propriety of moving an American around in such a shoddy vehicle.

I thought it interesting that my first night in a Muslim, Arab country, I should find myself waiting in the back of a car in the middle of the night, while a prolonged discussion took place as to whether I should be taken into the back of a van. I really had no idea what was going on, and became increasingly wary.

Apparently, my friends lost the argument with the two guys from the mini-bus, which I got in to with Fauzi and Mohammed. They were dropped off at their place, at which point I was offered yet another hotel, no thanks, I already have a place. Here’s a map …

At the Farah I was asked for some cash for their trouble. This was different from Fauzi’s attitude, where he’d seemed slightly offended when I earlier chipped in a dinar for gas at the gas station. I gave the guy a dinar because, hey, it was a cab ride. How about two, for transporting my friends? No … now we are getting in to let’s-take-advantage-of-the-rich-American-tourist territory. I gave him half a dinar more, and made my way to bed.