I arrived in Lyon around noon. I splurged for a Metro trip, that had the added benefit of getting me on the funicular up the steep hill the hostel rests upon. After making my bed, for â‚¬12 per night, I visited the Museum of Gallo-Roman History, which was chock full of ancient artifacts, and Lyonnaise history: Lyon was the provincial capital of Roman Gaul. Pretty mosaics. I wandered downhill through the city, keeping an eye out for somewhere I could grab a padlock, or, later on, a decent meal. I found no padlock and I ended up eating kebap, but I did find a book store with a small English section, and thus a replacement for _Catch 22_, and a free map of Lyon from the tourist center. After that I heard some commotion, and ended up wandering the streets with crowds of young French, accompanied by trucks rigged with trailers blasting dance music. From what I could gather, they were protesting new laws that gave the police more power and robbed the people of civil liberties. 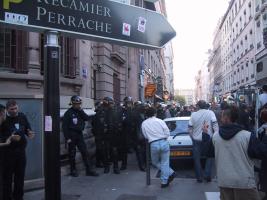 French cops in riot gear are saluted by French youth with mohawk,
using but one finger.

I wandered along with them, for the hell of it. At one point there was a throng of police down a side street, clad in riot gear. This seemed weird to me, as I’ve never seen such a thing at an American protest – are the French more skull-crackin’ old-school? Nobody I talked to understood why they were guarding such a side street. Then they advanced, and entered one side of the street we were on, which caused some consternation among the demonstrators. It was a tense scene at which my camera ran out of batteries soon after I figured out that the police had advanced in riot gear to form a protective barricade around their station, to fend off whatever harm might be caused by a somewhat anarchistic crowd that was protesting police power.

Fair enough. The crowd passed without incident, and proceeded to the park in front of the Perrache train station, at which point the procession turned in to a small rave, an event, with jugglers, a fire-breathing maniac, three different sound systems, and dogs rolling around in the fountains. It was all very funky, and one of the truck managers was kind enough to stow my backpack with its computer for me while I got my dance on. I hadn’t done such a thing since California. I bummed two tokes off an extremely stoned youngster. The party broke up at 19h30.