It turns out that I and many others woke up an hour early, because the French came off Daylight Savings Time while we slept. After breakfast, I went with a Japanese roommate, Michiaki, to visit the printing museum, which was extremely fascinating, then another kebab for lunch, and a visit to the conteporary art museum, which balanced out the printing museum by sucking in the extreme. We spoke French the whole way, as we felt more comfortable doing so in France than we did in testing out his English. It all went pretty well. I had a hard time remembering what I’d shared walking and talking Michiaki that I had not already shared in a long French conversation with a pair of young Japanese cuteys back at the hostel the evening before. It was all good, though. Well, except for the contemporary art museum, which I repeat, thoroughly sucked and was without the slightest shred of redeeming value except for the big dark room that was interesting for its sensory deprivation.

Next to the contemporary art museum was a movie theater which was playing Michael Moore’s new movie, “Bowling for Columbine” in English. I went and saw that, while my companion went his own way, since he didn’t feel comfortable with the idea of following a movie by reading French subtitles.

The movie was a grand dialog about contemporary American society, concerned with the roots of our epidemic problem of gun violence. He managed to keep from getting preachy and self-righteous, sticking to his strength of trying to offer and sympathize with all points of view. The result, in my opinion, was nothing short of fantastic, and if you have the opportunity to see this film, I strongly encourage you to do so, preferably with a group of friends or loved ones that you can share an interesting conversation with afterwards. The image of NRA President Charlton Heston, Moses himself, retreating uncomfortably from the image of a six year old girl who was shot and killed by her six year old classmate … well, it is a classic moment. Priceless, and filled with complex, genuine emotion. I loved it! 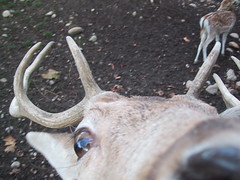 After the movie, I walked through the park where the cinema and the museum were located, snapping some fun pictures of deer they had in the park along the way, after visiting a greenhouse. I walked clear to the other side of Lyon to visit the Urban Museum, which was closed by the time I got there at 1800, but seemed to consist primarily of giant, outdoor murals, half of which were missing their interpretive signposts.

I purchased une demi-baguette, some confiture des fraises, and a pastry to snack on back at the hostel, with the juice and cheese I’d bought the night before, whilst updating the journal. On the way back, I discovered another, cheaper theater, that was closer to the hostel, and was playing “Signs” in English. After that, I found a place just down the hill from the hostel, that would sell me an Internet hook-up for â‚¬3 per hour. By dinner, I had the next days itinerary set up: Fine Arts Museum, movie, Internet access, and laundry. Yay!