After that, Uncle John navigated us down the islands of Denmark to a little town called Rodby. A ferry runs from Rodby to Germany. The advertised rate was 3â‚¬ for a pedestrian. That is a lot better than the 60â‚¬ I had to pay to get to Copenhagen a few days prior.

There was little else in town besides a hotel named Dan. As it was getting dark, Mom decided that they would stay there for the night. We splurged for dinner at the hotel’s expensive restaurant, as the alternatives were a diner with no seats, and an Italian restaurant populated only by its staff. We tried the next town over, where I ventured into a pub and asked for a restaurant, and after much frustrated grunting, was referred to the aforementioned hotel back where we had come from.

Splurging was excusable as it was our last night in Denmark; I was to ferry over to Germany, and the family were driving back to Copenhagen the next day to catch a flight back to the States.

Dinner lasted some time. We derived no small amusement from the fact that the one hotel employee we dealt with was working not only at the reception on the ground floor, but as the restaurant’s sole waiter upstairs. He was, understandably, a bit high-strung, kind of like Basil Fawlty. “Can we smoke?” “In Denmark, we smoke just about anywhere, so yes you can smoke.”

Uncle John wanted to chill the four-pack of beers that he had purchased, but there were no refridgerators in their rooms, so he asked the waiter about ice. The waiter explained that, however lamentably, the ice machine had broken, so that the ice cube in our water pitcher was the last in the entire hotel. Hoewever, in Denmark the water was safe to drink so it was not in any way necessary to boil the water.

The ferry ran every half hour, all night long. Walking over to the ferry, we drank the beer that had been chilled slightly in the restaurant’s freezer. On the ferry itself, nobody ever charged me any money but then what’s 3â‚¬ between friends? 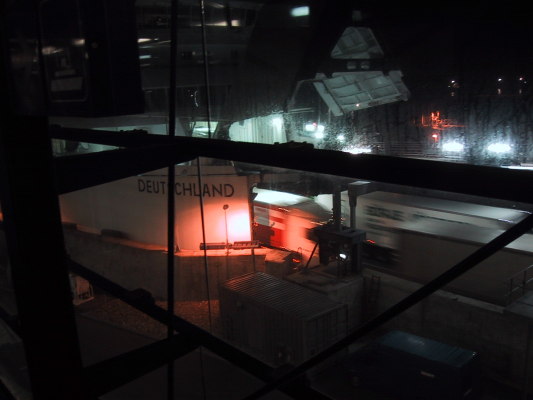 Trucks unload at the ferry terminal, as I leave my family in Denmark to make my way to my next adventures in Deutschland . . .