We took turns snoozing on a slow, cheap train through magnificent scenery. We made it into Rome in the afternoon, and holed up at the Pensione Esther near the station, where we stayed for 52â‚¬ per night under the friendly gaze of the old lady who lived there, who when not smoking, cooking, or watching Italian soap operas in her kitchen, was vigilantly mopping the bathroom floor. 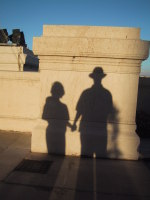 We set off towards the Colosseum area, and ended up in this museum commemorating Italian unification, which was itself pretty dull, but was way up high, and gave us great views of Rome. Dinner was had at a deli-type of place near the station. Janet seeed to like it, even though the place was full of smoke, coming in part from the chef, who was smoking as he prepared our food. I swear my pasta came in a bowl that hadn’t been washed. The clientele were pretty colorful as well. One family was from somewhere south of the Rio Grande, dark Indian faces speaking Spanish. A guy in a suit, sitting near us had a woman in tight pants walk up to him and start speaking in French and Italian, while a third guy joined them in Italian. The bill was pretty reasonable, and they gave us grapes for dessert.

I had seen posters for Robin Williams’ “One Hour Photo” and one of the waiters directed us to a nearby movie theater. “One Hour Photo” was not playing there, in part because it wasn’t open ’til next week. We found a glossy promotional piece that explained what movies were playing where, and a friendly movie theater employee walked over and pointed out to us the section with subtitled movies. Janet was keen to catch “The Tracker”, an Australian movie playing at a little art house a few metro stops up.

Metro tickets can only be purchased from a vending machine, which can only give change in multiples of five cents, for tickets that cost â‚¬,72. The machines furthermore refuse to short-change either you or themselves, so without a couple of cents in change, you can not aqcuire a ticket. We established all of this in Italian.

When we arrived at the relevant station, we asked a young guy who was standing around with throngs of other youth for directions. He grabbed the glossy movie thing, flipped through the pages some, puzzled at the theater we wanted, asked a couple of buddies, and pointed us in the wrong direction. We later ran in to some nice older ladies who asked if we were walking or driving. It was nine blocks from the Metro station. When we got there, the movie was well underway, and we spent some time talking to the ticket vendor, Giorgio, who was chilling outside with some English-speaking buddies. He was originally from Naples, and recomended a good Naplotean pizza place near the Colosseum.

On the way back, we didn’t have any two-cent pieces. I told Janet to forget it, because you don’t really need a ticket, and we have expired tickets, and that’s not a bad story for some dumb, exasperated, frustrated tourists who are just trying to get home, in the unlikely event that the authorities should ask to see our tickets. I’m sure there are a fair number of Romans who have trouble enough getting these insane tickets, such that the authorities have probably given up hope.

I think the ticket thing goes like this: people are sensitive about the subway raising its fares, but the system needs all the money it can get, so when they convert to the euro, they don’t round the prices at all but translate the lire fare directly into â‚¬,72. This is fair, of course, but the problem is that the existing ticket machines can only dispense so many varieties of coin, and will only be able to give change as small as five cents, even if it can tell the difference between the one, two, and five-penny pieces when inserted. As a result, anyone who rides the metro regularly either has some sort of pass, or carnet, or hoards two-cent pieces like an American college student hoards quarters for laundry. (Assuming they bother paying the fares at all.)

There was a big line in front of the Colosseum to purchase tickets for admission to the Colosseum and Palatine. We walked over to Palatine, where there was no line, and purchased our tickets. Palatine is much nicer anyway, the hill littered with ruins of many an Imperial monument, since the earliest settlement of Rome. We spent some time wandering about the place, in fair weather. We headed over to the pizza place that Giorgio reccommended, The Forum, and had some delicious pizza at a good price from friendly staff. Italian pizza is an entirely different beast from the Chicago pizza that I love, but it is at least as spectacular in its own right.

At the Colosseum, we encountered a cute little kitten, who had a cold, and any number of parasites, and sunburnt ears, but seemed well-fed. It was a lonely critter, so we wiped the snot off its face with a tissue, and I pet it for a good long while, which helped clean its fur, and brought much purring. As we walked towards the elevator to check out the second level, it excused itself from my arms and snuck back in to the ruins.

We then walked over to Trevi Fountain, back up to the theater to see our movie. On the way back to the hotel, Janet spotted a supermarket which had really cheap food. We got juice, and some sandwich material, and from this was provided our evening meal.