November 20, 2016
About Me, Sunnyvale, Testimonials

I was in Chicago this week. There was a death in the family, so it was good to be among my kinfolk with our adorable, loving child.

Chicago is famously corrupt and moribund and the State of Illinois is mired in perpetual scandal. It is a magnet for immigrants but it is also a city from which many of us Californians are originally from. I’ve gotten used to the California way and I generally prefer it but what I noticed this week in Chicago was all the construction.

For a city that is corrupt and moribund, there was an awful lot of demolition and rebuilding going on. On the way to the L in the evening we stopped and stared over a fence as a variety of heavy machines worked under brilliant stadium lights. The star of the show was a yellow machine with a huge claw on the end of a boom arm reaching several stories up, to the top of a building, it was tearing down from the top, girder by girder, as another machine sprayed down the dust with a water hose. The claw was at the very end of its reach, it felt the machine was on tippy toes, as it tugged away, girder after girder, waiting for torrents of debris to fall, pulling the pieces out and dropping them into piles to be dragged into more discrete piles by lesser enormous machines. It was like watching dinosaurs go about their business. Father, Son, and Grandmother: none of us could take our eyes off the marvel. “They should sell beer and peanuts,” said I. 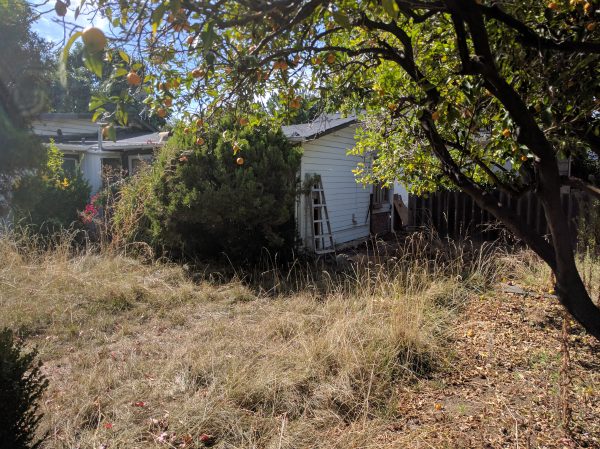 The neighbors of this derelict house in Sunnyvale are terrified at the prospect of it being replaced with housing for families.

We don’t get this in Suburban California. What little “history” we have is viciously guarded and any attempt to replace the old with newer and better is often met with resistance and exaggerated speculation as to the intentions and end results of new development. You don’t see that so much in the old country–In Chicago, and in any place with some history under its belt, everyone knows that they are surrounded by at least a century of continuity–Everyone is merely links in a great chain. The city is inherited and bequeathed and the hope is to leave it in a little better shape: Urbs in Horto. 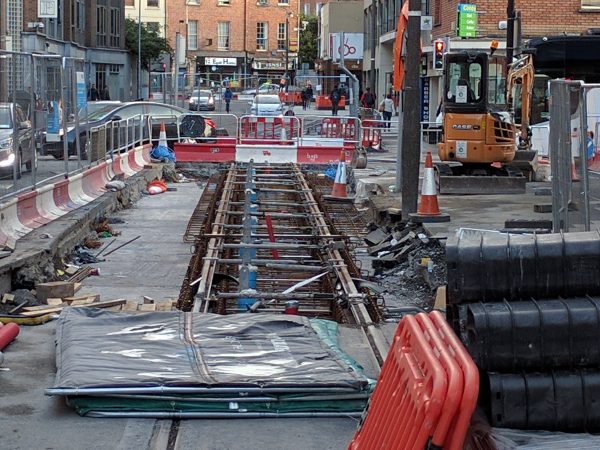 In Dublin, I saw them building a light rail line, right down an ancient street. It made the Northern Californian in me jealous.

They say that University Politics is the most vicious because the stakes are so low. I get a sense of that observing some of the political rhetoric in Sunnyvale. Out here the city is so new and raw that the idea of changing it implies that those who built the city and have lived in it until now are being completely rejected by the hordes of newcomers flooding the city from the Midwest and the Far East. But in the ancient lands where the immigrants come from, there is no such sentiment: the cities are naturally timeworn, and the idea of redevelopment is an intuitive component of the cycle of death and rebirth.

Fierce as a dog with tongue lapping for action, cunning as a savage pitted against the wilderness,
Bareheaded,
Shoveling,
Wrecking,
Planning,
Building, breaking, rebuilding,
Under the smoke, dust all over his mouth, laughing with white teeth,
Under the terrible burden of destiny laughing as a young man laughs,
Laughing even as an ignorant fighter laughs who has never lost a battle