Housing in the Silicon Valley: Sunnyvale Planning Commission and 838 Azure

On October 10, 2016, file 16-0548 was heard by the Sunnyvale Planning Commission. The item was to down-zone a condominium development per the General Plan, and to up-zone a one third acre parcel from Residential Low Density to Residential Low-Medium Density. By up-zoning the site at 838 Azure St, the property owner would be able to build four homes on the property instead of a maximum of two.

The Planning Commission passed the down-zoning proposal but denied the up-zoning at 838 Azure St. I do not believe the decision with regard to 838 Azure was consistent with the public interest of Sunnyvale residents. At a time of housing crisis, we should err on the side of providing more affordable homes for more families, and the location at 838 Azure is well suited to providing housing with minimal impact on congestion.

The property presently hosts two dilapidated structures which had recently housed squatters. There are dying trees and contaminated soil from Sunnyvale’s orchard days. 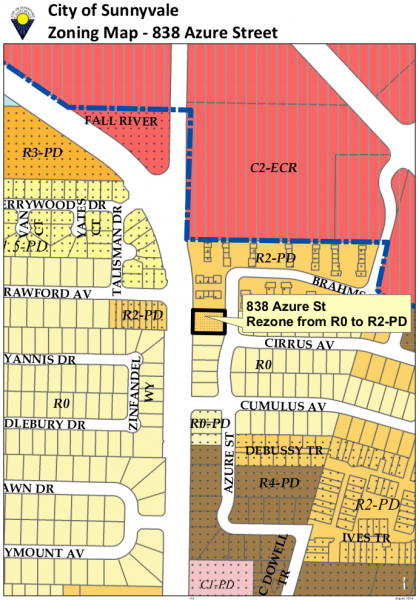 Much of Sunnyvale is poorly suited to walking or public transportation. Housing in such areas encourages automobile trips and results in congestion. If you want to increase housing while avoiding congestion, you want to place the housing in areas where walking and public transit are viable options: when people have the option not to drive they are less likely to add congestion.

The average Walk Score in Sunnyvale is 55. For 838 Azure the walk score is 78. The site is well within Sunnyvale’s walkable downtown core, a very close walk to multiple groceries, restaurants, and Murphy St. This pedestrian accessibility does not encourage automobile trips, thus it mitigates congestion. 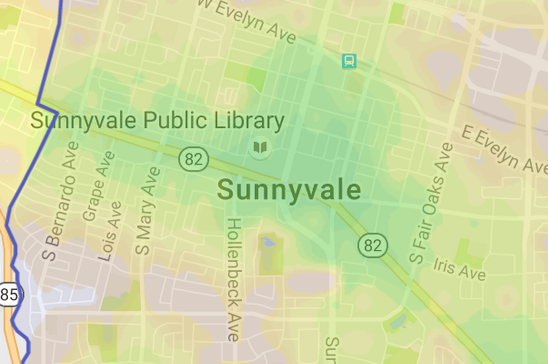 To avoid congestion, put housing in Sunnyvale’s walkable core: 838 Azure is at the Y of Mathilda and Sunnyvale in the lower right. Source: Sunnyvale Walk Score

The site is very near VTA’s premier bus route: the 22/522 El Camino Real, as well as the 55 and 54 routes for North-South mobility. Within an hour, public transit can get residents across Sunnyvale, including the offices on the North Side, as well as much of Cupertino and Santa Clara. The downtown areas of San Jose, Mountain View, and Palo Alto are accessible. At just over a mile to Sunnyvale Station, the site is not a convenient walk to Caltrain: residents may prefer to bicycle. 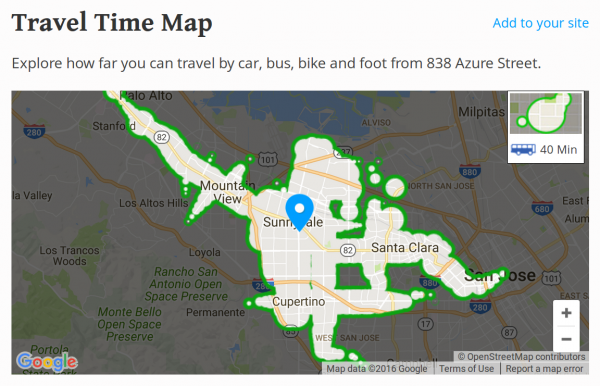 Via Walk Score: where you can get from 838 Azure via public transit.

Two neighbors spoke against the zoning change. A neighbor who lived in an adjacent townhouse was concerned that the development of townhouses on the neighboring property would not meet his aesthetic standards. A neighbor to the south was concerned that his dogs might get out if the property was developed, and that if the driveway were moved from Sunnyvale-Saratoga to Azure then there would be less street parking available on Azure.

Commissioner Melton noted that the benefits of the GPA and Rezone of the Azure site are the PD designation and an increase in housing density, and that the negatives include parking, neighborhood incompatibility and inappropriate density.

Commissioner Simons said he does not like the potential spot zoning of 838 Azure.

Vice Chair Rheaume said he is not supporting this motion and supports increasing the density of this lot.

The motion carried by the following vote:

This item should come before the City Council on November 1. Anyone who might wish to speak up on behalf of the virtue of increased housing in Sunnyvale can contact the City Council or make a public comment of up to three minutes at the upcoming council meeting. I am hoping to attend and speak November 1. If you think you might also be interested, or would like to be notified of any updates, please drop me a line: dannyman@toldme.com.

The City Council enacted an ordinance to change the zoning at 838 Azure from R0 to R2-PD. The vote was 6-1, with Council Member Pat Meyering in dissent. Council made it clear that they were only approving the zoning change, in order to provide more housing in an area well-suited to pedestrian, bicycle and public transit. Council was generally most concerned with how the development would transition from the adjacent R2 zones to the rest of the neighborhood, which is among the several considerations which will be addressed subsequently in the planning process.

The Property Owner is now at liberty to submit plans for development, which will be subject to review by the Zoning Administrator, with community feedback, and potentially by the Planning Commission and the City Council.