Why Young Liberals Feel the Bern

I was watching Larry Wilmore and the panel asked itself why are young liberals not excited about Hillary Clinton, and they jumped straight to the thesis that the cause is sexism. I know that there is no shortage of hatred against Hillary rooted in sexism, but for young liberals, I don’t think that this is what is turning them on to Sanders. I think that if there is a prejudice at play, it is against going back to the past.

Many of us who can remember the 90s remember it as a pretty good time, (as long as you weren’t big on equal rights for gays) especially in contrast to the George W years. Sure, the Republicans hated everything about the Democratic president but at least that could be rationalized by his obvious moral shortcoming. Younger liberals don’t remember those years. They came of age under a president whose political credentials were rooted entirely in his relationship to a 90s president. That was a train wreck. Eight years ago, we considered Hillary Clinton but decided that whatever nostalgia we felt for the 90s was trumped by an inexperienced Black Guy with a funny name. Say what? Its like progressives were less than eager to embrace the past.

And you see how that works out. Like Clinton, the Right hates Obama. Alas, Obama’s greatest moral failing is that he enjoys an occasional cigarette, so the Right is left to invent moral failings: he’s Muslim! he’s foreign! he’s Socialist! He’s … whatever … meanwhile the Left is trying to figure out the degree to which the Right hates Obama because they’re just plain old racist or do they simply hate any Democratic President?

Anyway, you look at your options: Hillary would be a perfectly competent President, like Bill was. Sure, the Right will hate her but she’s been dealing with that bullshit longer than most of us have been alive. That she hasn’t been crushed by hate and still seems somewhat human is a testament to her strength of character, and sheer, pragmatic, calculating ambition and political savvy. She’ll know how to work a hostile Congress to eek out incremental progress, much as Obama has.

Or, if they’re going to hate your president anyway, why settle for a pragmatic, shrewd centrist who will eek out incremental progress when you could just vote your Socialist ideals and send the Right wing our own tough New Yorker who says out loud what we’re all thinking anyway: that the banks are too big, that the rich get away with murder, and that Socialism is not an evil bogey man that will hand victory to the USSR. 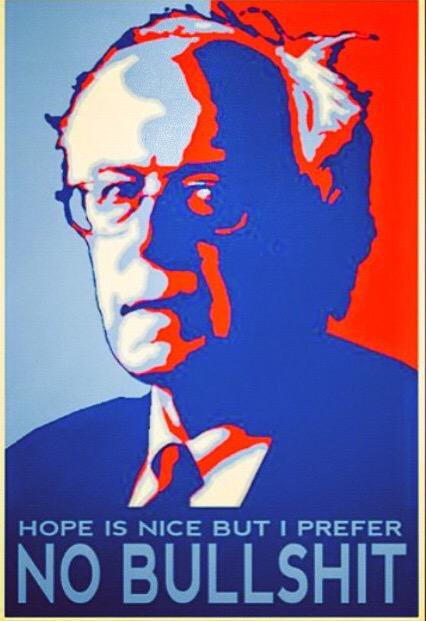 And … I for one remember the 1990s … I don’t remember Clinton actually achieving anything. Healthcare reform went down in flames. Gays could be allowed in the military as long as they kept it in the closet. We deregulated the banks while sticking the evil Welfare Moms with red tape. We really didn’t move the ball forward much … if at all. When we later swooned for Barack “Hope and Dreams” Obama, we got some health care reform, women now serve in combat, and gay people can get married in all fifty states. Sure, we haven’t closed Guantanamo Bay, and there are still some troops in Iraq and Afghanistan, but Osama bin Laden is dead and we aren’t fighting any new wars. Not bad for voting for the unlikely young guy who had more rhetoric and possibility to offer than the Clinton option.

So, yeah, when it comes down to another Clinton administration versus taking a chance on Idealism, a lot of us figure voting for an Angry Old Brooklyn Jewish Socialist could be the better option.