We had company over Wednesday evening. Friends of the family who have cat-sat for us. They brought dim sum. After dinner we sat around chatting. I got a call on my mobile from a 408 number. I took it.

“Are you the owner of Maxwell?”

“I am. Is he causing trouble?”

It was the opposite. I grabbed a cardboard box and hustled down to the corner, where a small crowd had gathered. The woman who had called me said he had been standing in the street, looking the other way, when the car hit him. He died instantly. She removed him from the street and found my number on the tag. We hugged. She was obviously a cat person, who was glad that he had a collar, a bell, and an identification tag.

I brought him home. He rested briefly where his feline companion Maggie took a last opportunity to groom him. The young woman who drove the car and her father came by to express their remorse and see if they could make amends, but there was nothing to be done. The young woman was in tears. She wants to be a veterinarian. The Father remembers dogs who had been lost to cars. We agreed that the Humane Society might receive a donation. We shook hands several times. What a way to meet the neighbors. 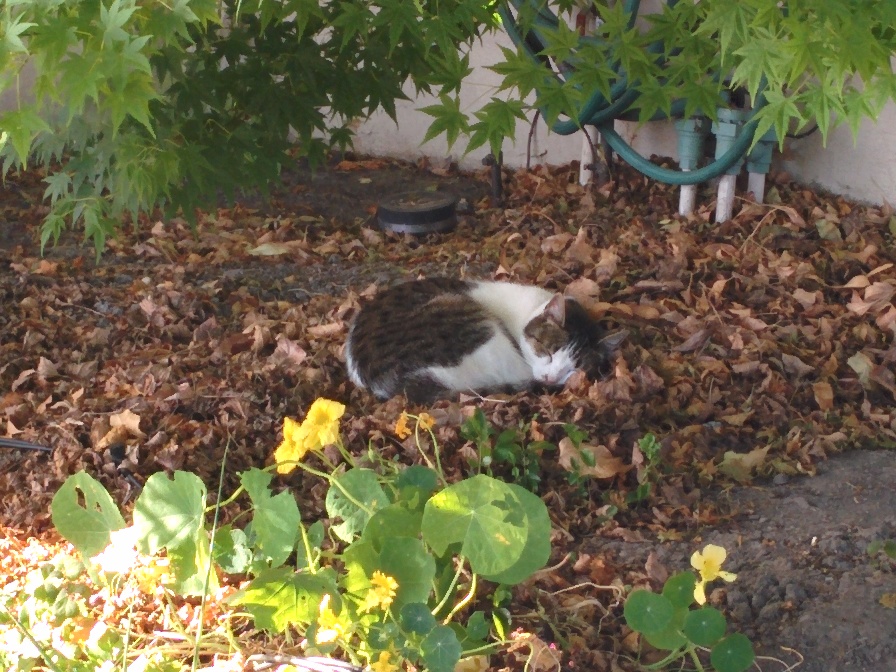 Maxwell napping in the front yard in June.

In the back yard, a shallow grave was dug. Maxwell was wrapped in a familiar fabric, and lain to rest. Words were said.

It will take some time to feel his absence and truly mourn his departure. He might have lived a much longer life as a house cat, but he loved the outdoors and was well known in the neighborhood. He lived as he chose and while his end was violent, it was swift and he did not suffer.

We’re going to miss you, Maxwell!