I reported the following to the FBI, to LogMeIn123.com, to Century Link, and to Bing, and now I’ll share the story with you.

Yesterday, May 12, 2014, a relative was having trouble with Netflix. So she went to Bing and did a search for her ISP’s technical support: 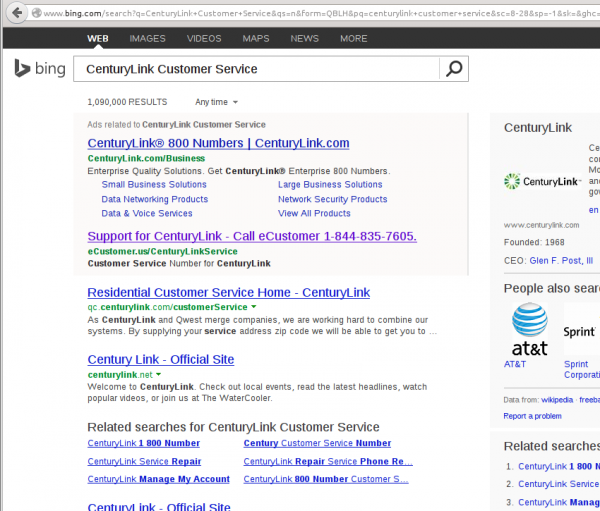 Bing leads you to a convenient toll-free number to call for technical support!

She called the number: 844-835-7605 and spoke with a guy who had her go to LogMeIn123.com so he could fix her computer. He opened up something that revealed to her the presence of “foreign IP addresses” and then showed her the Wikipedia page for the Zeus Trojan Horse. He explained that she would need to refresh her IP address and that their Microsoft Certified Network Security whatevers could do it for $350 and they could take a personal check since her computer was infected and they couldn’t do a transaction online.

So, she conferenced me in. I said that she could just reinstall Windows, but he said no, as long as the IP was infected it would need to be refreshed. I said, well, what if we just destroyed the computer. No, no, the IP is infected. “An IP address is a number: how can it get infected?” I then explained that I was a network administrator . . . he said he would check with his manager. That was the last we heard from him.

I advised her that this sounded very very very much like a phishing scam and that she should call the telephone number on the bill from her ISP. She did that and they were very interested in her experience.

I was initially very worried that she had a virus that managed to fool her into calling a different number for her ISP. I followed up the next day, using similar software to VNC into her computer. I checked the browser history and found that the telephone number was right there in Bing for all the world to see. She doesn’t have a computer virus after all! (I’ll take a cloer look tonight . . .)

I submitted a report to the FBI, LogMeIn123.com, Bing, and Century Link. And now I share the story here. Its a phishing scam that doesn’t even require an actual computer virus to work!