Our Future: Autonomous Cars and Transit

My opinion, one of many, as left in a comment:

The current Google Car can operate on city streets autonomously, but it needs someone doing the backend work of getting all the streets mapped out perfectly, figuring out exactly where the lanes are. Then in order to do a truly autonomous taxi service, you’ll want a two-way video linkup for the dispatcher to pilot the car if it gets stuck in some situation like the fire department blocking the street, or to monitor security.

For that reason, the current livery model works really well: a small, local company will service its fleet and its IT needs. The biggest expense, the driver, will be eliminated. This will serve an evolutionary role of a taxi service within a limited service area. This will be mostly shopping trips for car-less people, and “last mile” services to transit connection points, like Taxis serve now. The evolution comes with lower cost: short-haul, off-peak commuter needs, more “last mile” transit service where an autotaxi will be faster and more convenient than the local bus service, but also cheap.

What happens next? “Roaming” agreements among carriers sharing a common technology platform. The service areas of the autotaxi companies grow larger: your local autotaxi can drop you off on a shopping trip to a regional big-box store two towns over and the local autotaxi there can bring you back cheap. Expanded mobility, less reliance on transit.

This doesn’t mean the end of transit. Individual automobiles still require more energy and infrastructure to operate. The autotaxi will dominate short trips, but especially at peak demand, we will need to rely on higher-capacity transit backbones.

The biggest driver of the need for peak-period transit handoff is the capacity limitations of the autotaxi carriers. You simply can not carry everyone, but you want to be a part of the picture. So, yeah, the service gets you from your house to the transit hub, maybe work out relationships with local transit agencies so thaty “last mile” can be served by auto-taxi as a part of the transit fare itself.

The other limitation is for longer-range travel, even a fully autonomous rubber-on-pavement highway system will not be able to match the speed of rail-based or air travel. The autotaxi might drive you fifty miles to the high-speed train station, but then you’ll board the bullet train for LA which will be faster and charge a lower fare.

Anyway, the roaming evolution will mean that we go from local taxi service to regional airport shuttle service, and this will be great for those who live some distance from a long-haul transportation hub who want to make it to/from the airport, &c.

Our streets didn’t change much from the carriage to the automobile era. They’re wider and too dangerous for people to walk in. I doubt the streets will change much in the autonomous era, except they’ll narrow again and it will be safe to walk, bike, and play in them again.

My other prediction is that the autotaxi will make getting around so convenient, that car ownership will continue to decline. You will see a winners-and-losers scenario in the auto industry: the losers will realize too late just how badly they are in trouble. They will try to spread Fear, Uncertainty, and Doubt as to the safety and wisdom of reliance on autonomous vehicles, just as they try to sell some. The winners will have identified the coming trend and geared their business to serving the needs of autonomous fleet operators, and to those niche consumers for whom autonomous vehicles are not appropriate, or who just love driving their own car. Other winners will include pedestrians, cyclists, the young, the elderly, people with disabilities, suburbanites, night life, and very likely the environment.

Some weeks back I saw a poster for “Shen Yun: Reviving 5,000 Years of Civilization” at work and thought “Excellent! The wife digs artistic performance and bonus points for digging some traditional Chinese culture.” I grabbed some tickets and mentioned to a coworker. “Shen Yun? That’s Falun Gong.” I know very little about Falun Gong, except that the Chinese government views them as a threatening cult. Of course, the mainland government is easily wigged out over any perceived threat to stability, so I figured that doesn’t tell us much. We’re seeing a performance sponsored by an oppressed religious minority. That could mean anything, really.

The performance was pretty cool. Lots of dancers in colorful costumes evoking stories from Chinese history. I’d say it is like watching a Chinese version of the Nutcracker Suite. Lots of color, lots of movement, and good music. Although they’re telling mostly ancient stories they make effective use of a modern prop of a projected backstage. This saves not only on set design, but the characters at various points jump off the back stage and fly up into the screen as digital avatars. The first time I saw this I thought it was a bit gimmicky, but by the second instance I thought “hey, that is pretty neat, and I bet really magical for the kids.”

And then there’s the Falun Dafa bits. They have some solo singers come out and sing in Chinese, which is cool. They even put the lyrics on the back screen in Chinese and English. I am sure some of the poetic nuance is lost in translation, but the songs lament that we are … most of us, anyway … Gods from the Heavens who have come down to Earth for some reason, something about breaking the cycle of reincarnation and restoring the cycle of creation and destruction. To the disinterested observer it comes across as Buddhist Scientology, and the cycle of creation and destruction sounds like the sort of thing that would raise the ear of a mainland censor.

Two of the dance performances are set in modern China. In one, a tourist gets sent to jail when he unintentionally takes a picture of an innocuous Falun Dafa protest. The guy is tossed in a cell with the Falun Dafa kids, whom he wants nothing to do with, but after the guards treat him contemptibly, everyone in the cell identifies their common predicament. I thought “alright, the Chinese government overdoes it, and many social reform movements have found strength in the jails. Right on, brothers! Fight the power!” In the final dance, the Falun Dafa are having a great time protesting in Tienanmen Square. Right on, sisters! Let us see your “tank man” performance! As soon as the Chinese police come out to bust some heads, a massive earthquake starts to destroy Beijing. Huh? That kind of sucks! But, no worry, the Gods come down and restore Beijing … everything except the Great Hall of the People … ah!

Yeah, I can see how even a reasonable government might not be super enthusiastic about that sort of performance.

The show was overall entertaining. I would still hope that people can practice their religion freely. But whatever innate sympathy I might have had for the Falun folks is diminished, especially by their last performance. When it comes to resistance movements, I am most sympathetic to the non-violent, and to those who aren’t fantasizing that apocalypse is an element to their eventual success.

Speak Softly, and Carry a Crowbar 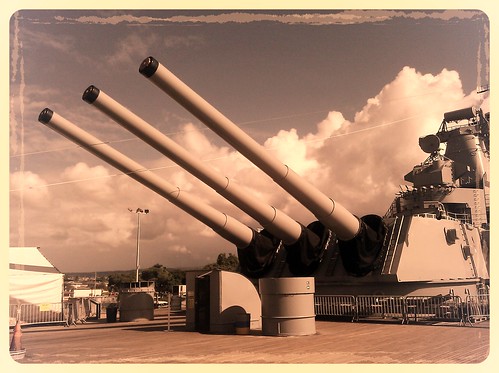 We are not the young, strong, boisterous nation that we once were. We are older and slower, hopefully a bit wiser. We are beginning to suspect that if we sold the old gunboat we have parked in the driveway that we could afford to repave the driveway, upgrade to energy-saving appliances, help the grandkids through school, and still have a few bucks left over to take the wife out for tango lessons.

But how can you be safe without a gunboat in the driveway? Well, I have been thinking about that. It turns out that almost any burglar can be scared off by a guy wielding a 2×4, or a baseball bat, or a crowbar. In fact, Grandpa used to sleep with a crowbar by his bed, just in case. He was tough and never scared. And these days if you don’t find an old man with a crowbar scary you can bet his wife is standing behind him, on the phone with the cops.

It is cool if you want to conduct training or give presentations using Internet technology. However, if you want to call it a “Webinar” you are required to ship a safety helmet and sippy cup to all participants. If you’re going to be retarded, be responsible about it.