We recently purchased a home, which was originally built in 1948. I was just puttering in the back yard when I discovered a sheared metal post in a cement foundation. I figured I would dig the post out. This wasn’t easy but it was gratifying. At the end I had a 1′ deep hole in my back yard and some angry ants. I saw what looked like a white button at the bottom of the hole. 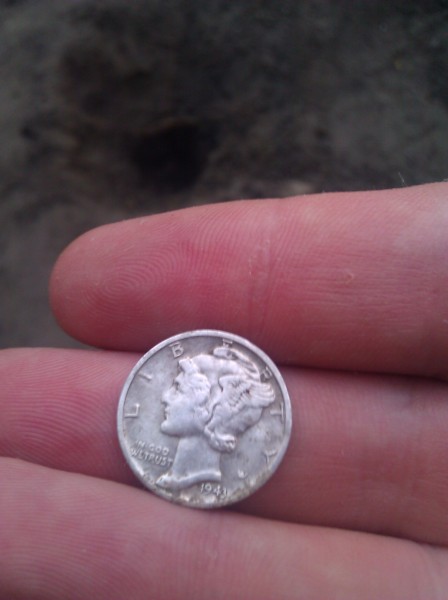 After cleaning it off, I found that it was a 1943 US dime, with a bust of Liberty. Neat! I’m not sure what purpose the metal post must have served, (I reckon it was the base of a clothes line) but it must have been installed around the time the house was built.

I have to wonder if whomever dug the original hole left this souvenier to the future on purpose, or if the dime just slid out of his pocket.

Correction: per Wikipedia, this isn’t Mercury, God of commerce, but “the mythological goddess Liberty wearing a Phrygian cap, a classic Western symbol of liberty and freedom, with its wings intended to symbolize freedom of thought”

August 25, 2012
About Me, Movies, News and Reaction, Politics, Testimonials

As a white guy I can often get away without worrying about racism. But then I’ll get on the phone with my step mother. As a proud black woman, she takes the Obama hatred personally. “They wouldn’t be so vicious except he’s black.”

I know enough about my country to agree. This is a racist country. We have elected a black man, but we’re in that awkward transitional phase where we feel like we’re over the worst of it but we still have racism that gets diluted year after year. Not sure if that is true or not . . . but like I said, the white majority manages not to think too often about racism.

I get reminded again, today, catching up on blogs and Angela Tung has to speak up about this video:

She contrasts this to McCain in 2008 gently prying himself away from more blatant racism from some of his supporters:

The earlier video makes me squirm all the more … I wish McCain had said that Arabs are decent people too … but you can tell that his top priority is to back away from the crazy. McCain isn’t going to revel in the easy hatred of his opponent. “Obama is a decent man. You do not have to live in fear of Obama being president!”

And, I’m totally cool with a sense of humor, but us white guys, especially anyone running for public office, know there are things you just don’t joke about, especially not in front of the TV cameras. Of course nobody asks about our birth certificate. Nobody asks where we are from. That never happens. Its preposterous! Because white == American == white! Everyone knows this! The only reason an intelligent person like Mitt would crack a joke about his birth certificate to a crowd of supporters is as a nod to his “birther” supporters.

Nobody asks for Romney’s birth certificate because he’s not a n*gger.

That’s the plain and simple truth, and when Romney deliberately brings it up he is race-baiting his audience.

Angela takes is more personally than I do … she is quicker to speak up. But even if the casual coded racism doesn’t bother you, what is all the more disappointing about Mitt Romney is that he is so desperate to pander to an audience that he will even pander to racism. John McCain had some character and integrity. The same has not been demonstrated by Mitt Romney.