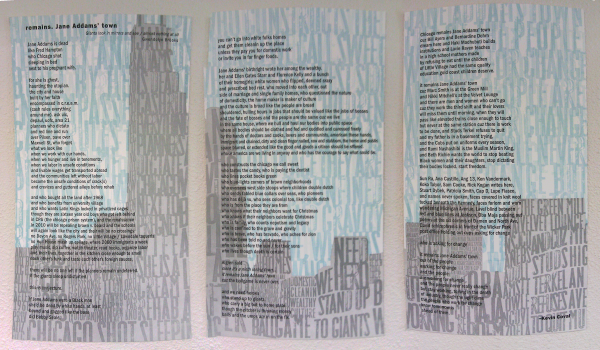 This triptych of a poem caught my eye from across a classroom at De Anza college in Cupertino.

Break time during a class at De Anza College, I wander across the room. The skyline . . . that’s John Hancock. I start to read . . . words written by Kevin Coval.

My home town, Chicago, the city of broad shoulders and ambition, is where the wealthy have pushed the workers and the workers have pushed back. Jane Addams, as my memory serves, founded the Hull House back in the 19th century, to look after the needs of working people: meals, health care, education, general community services. At a time when class divisions were sharper than they are getting to be today, Jane Addams bucked the conventions of her time to push for the American ideal: that we all, regardless of class or wealth, merit a helping hand, a warm place to sleep, and nourishment for our bodies and our minds.

Growing up in Chicago, getting educated in the Chicago Public Schools, the sense of perpetual struggle for a better, more equitable future, I think it gets in to your blood. People come looking for a better life, and they find that sometimes they have to push a bit to realize that better life, if not for themselves then at least to give their children a shot. We’re all passing through those gates, at our respective levels of society, and the struggle never dies and the struggle must never be forgotten.

Now I live in the Silicon Valley, where people struggle and strive, and while the ultimate aim is to make the world more comfortable and efficient, the focus is pretty far removed from the front lines of class warfare. Even so, I ride the train every day past miles of walled mobile home parks, and I wonder if there’s more going on beneath the surface than us privileged IT folk know.

A quote from Al Franken, via The Sun:

“In her book A Distant Mirror: The Calamitous Fourteenth Century, Barbara Tuchman writes about a peasant revolt in 1358 that began in the village of St. Leu and spread throughout the Oise Valley. At one estate, the serfs sacked the manor house, killed the knight, and roasted him on a spit in front of his wife and kids. Then, after ten or twelve peasants violated the lady, with the children still watching, they forced her to eat the roasted flesh of her dead husband and then killed her. That is class warfare. Arguing over the optimum marginal tax rate for the top 1 percent is not.”

Arguing over the margins, in the grand scheme of things, describes my day job.

and we need heroes
who stand up to giants
who carry a big bat to home plate
though the pitcher is throwing money
balls and the umps are in on the fix.

I’m no hero and my bat is nothing to brag about, but I relish those occasions when I do get to step up to the bat and swing, however ineffectually, at a ball I’m not allowed to hit. Its the Chicago in me. I owe more.