January 3, 2012
About Me, Chief Illiniwek, Letters to The Man, News and Reaction, Politics, Testimonials

I found this in the Palo Alto Daily News today: 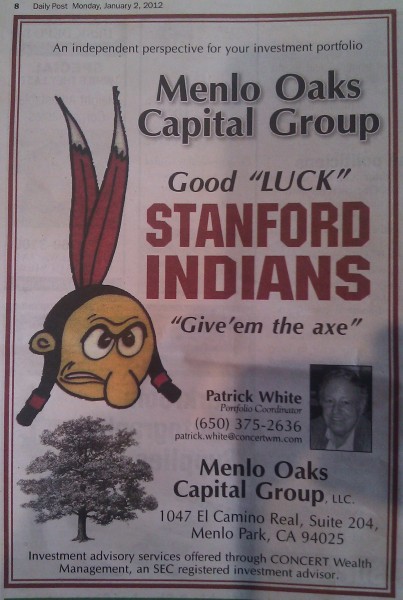 Stanford stopped using an Indian as a sports mascot in 1972. That put them 35 years ahead of Illinois. We retired our Indian mascot in 2007. (I’m still embarrassed about that.)

Anyway, since Patrick White saw fit to publish his name, face, and contact information alongside a racist cartoon in a newspaper, I dropped him a line suggesting that something might be amiss, and he wrote back saying that no, he was proud to stand by his cartoon, so I shared my own feelings with him:

It is good to cheer on your sports team, but I suspect that if the sports team mascot when you were growing up had been a buck-toothed, squint-eyed Chinaman in a big peasant hat, that you might think twice about printing a Chinaman cartoon in the newspaper. If you were to have such respect for Chinese people and culture, perhaps Indians merit the same sort of respect.

When I was younger my school had an Indian Chief for a mascot. The dozens of our Native American students found it upsetting and it took a few decades of protesting before it was finally removed. While one side found it upsetting that their culture was caricatured to cheer on a sports team, fans of The Chief took offense that Liberal Elites wanted to destroy their culture by imposing Political Correctness on their Hallowed Tradition. So, you had folks insisting that they had to insult another culture in order to properly honor their own culture.

Anyway, some years after I graduated, The Chief got to retire. Alumni kept contributing money and people kept cheering on their team as they had before. Nothing positive was lost, and our school has since regained some respect it had lost during its years of overt racism.

You can make fun of me and rationalize printing racially offensive cartoons in the newspaper all you like, but somewhere deep down, you know it is not right, and you know that you are offending people and scaring away potential clients. Most people are too polite to raise a fuss. But this topic means something to me, so I thought I’d drop you a line and encourage you to think things through.

I don’t need to change Pat White’s mind, and I surely don’t need him to manage my wealth. On the whole, the world seems to be taking a step or two forward for each step back. But it sure is weird to see a racist cartoon published in a newspaper is 2012, 40 years after Stanford managed to figure out that American Indians deserve a little more respect.

Next: My First Book Credit
Previous: Grown Man Playing With Christmas Toys
Categories: About Me, Chief Illiniwek, Letters to The Man, News and Reaction, Politics, Testimonials