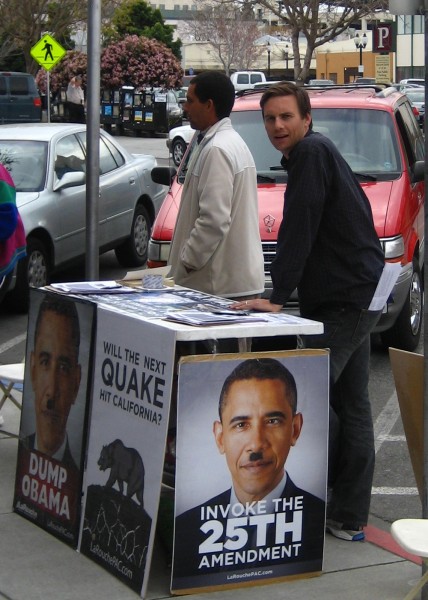 Tea Party? No, these guys make those guys look reasonable . . .

I was on my way home and saw these guys outside the Mountain View Post Office. I looked at the Obama-with-a-Hitler-moustache and figured the Tea Party had set up shop. I snapped a picture, and then this guy asked if I was worried about the solar flares.

Solar flares? Tea Party people don’t worry about solar flares . . . I smiled and approached: these guys were doing performance art! I told them solar flares are good for cooking.

“Obama isn’t doing anything to stop the solar flares,” he began to explain.

I saw the name LaRouche and realized these guys weren’t parodying the Tea Party: they were actually way further down the rabbit hole of crazy. “Well, he likes solar power,” I punted.

As the guy began to explain that we should be performing nuclear fusion ourselves I edged away. I am an impressionable young man with a sufficiently unconventional belief system: I don’t want to catch their crazy!

Next: The Mystic of Black
Previous: Beyond the Best by . . .
Categories: Photo-a-Day, Sundry