Elder on a Bike

Last month I “cut and copied” the following letter printed in the Palo Alto Daily News. (Or I think its called the Daily Post now.) Now I shall paste, transcribe and share: 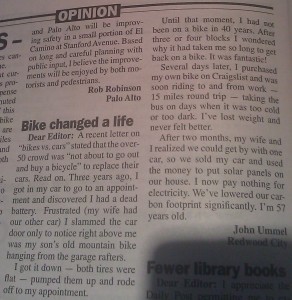 Dear Editor: A recent letter on “bikes vs. cars” stated that the over-50 crowd was “not about to go out and buy a bicycle” to replace their cars. Read on. Three years ago, I got in my car to go to an appointment and discovered that I had a dead battery. Frustrated (my wife had our other car) I slammed the car door only to notice right above me was my son’s old mountain bike hanging from the garage rafters.

I got it down — both tires were flat — pumped them up and rode off to my appointment.

Until that moment, I had not been on a bike in 40 years. After three or four blocks I wondered why it had taken me so long to get back on a bike. It was fantastic!

Several days later, I purchased my own bike on Craigslist and was soon riding to and from work — 15 miles round trip — taking the bus on days it was too cold or to dark. I’ve lost weight and never felt better.

After two months, my wife and I realized we could get by with one car, so we sold my car and used the money to put solar panels on our house. I now pay nothing for electricity. We’ve lowered our carbon footprint significantly. I’m 57 years old.