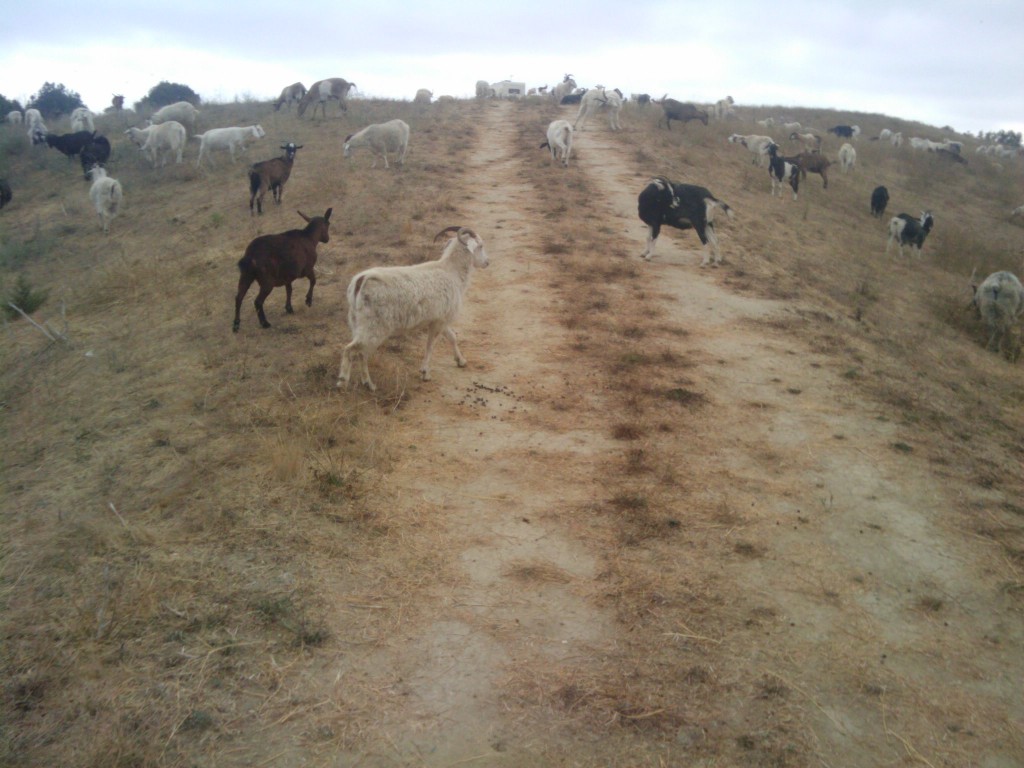 Last night I dreamed that this pizza place I like to go to gave me an extremely awful experience, and wanted to charge me for an entire pie for a mediocre slice to boot, then said something about just because a slice had hit the floor that their floor was as clean as the average dinner plate. I threw down some cash and loudly declared how awful they were, and that although I had liked them before I was sorely disappointed and they had lost a customer. I was pleased with myself for stating my grievances so clearly, because I rarely complain to a restaurant. I stormed out of there. A part of me hoped that the manager might follow me to the street and apologize but I knew that wasn’t going to happen.

I figured I’d have the very last word by posting a negative review on Yelp, then realized that I was dreaming, and it would be unfair to post a negative review of a place based on a dream experience. But then, the place only exists in my dream, so . . .

I think the pizza place was actually a metaphor for the ex-wife, in which case running off to Yelp wasn’t quite the answer, either. My dreams have been somewhat anxious lately, and I’m not clear as to why.

And, yes, there were goats along my commute today, but on a side road gated off from the trail.

I am so happy to see these photos of the Chilean miners coming out of the ground. Goners brought back to their families. I just happened to scroll past comment 163:

“So many people are thanking God, but I want to thank all the engineers, scientists, and workers who spent months and years developing and deploying the technology and resources necessary to make this possible. Thank you for giving these men their lives back and for providing all of us with an example of triumph over great adversity.”

Most of our office is cubes. High, neutral-colored walls that evoke in my mind the cells of medieval monks. At the periphery are rooms with doors: conference rooms for meetings or private offices for managers, whose work lives are dominated by meetings. The individual contributors like me are the muscles, and the managers are the nervous system.

Any of these conference rooms / offices have a name plate outside the door, indicating either the occupant or which conference room is inside. My first confusion came when I was trying to find a quiet room for a phone call, and spotting a darkened room with a comedian whose name I didn’t recognize and sticking my head in to find someone’s unoccupied office . . .

The managers in my group know to keep their offices locked, while away.

This morning someone asked me if I knew where so-and-so was. Never heard of him. I asked, in all sincerity, “is he an employee or a comedian?”

In our monks cells, we’ll take what bland pasty humor we can get.

This morning I learned that my grand-uncle, Bill McConeghey, has passed. He had just entered hospice care following a stroke. This was his time to go and even though I never knew him so well I miss him. He was a good guy who looked after others, and had a decent sense of humor to boot. A good guy. A role model.

And as I wrote to a well-meaning Christian relative:

“This is a time for Atheists to do their thing according to their beliefs. This is a time to offer comfort to people where they are, and an opportunity for you to respect, observe and appreciate the different religious beliefs of a family who are grieving. Be quiet, listen, engage in the universal human relationship we can all share regardless of religion. In this way, if someone finds a need to learn more about your religious beliefs, your words will find a receptive audience.”

Cisco ūmi. It is a HD webcam you hook up to your HDTV and you can talk to friends and family. Like Skype, but much better quality. Unlike Skype, which is free, you’ll need to spend $600 on the appliance, plus a $25 monthly fee. It is also Japanese for “sea urchin” and to spell this product-for-North-America properly you will need to render an unfamiliar glyph. (&#363)

I’m not quite seeing how this even remotely competes with Google TV, which will do all sorts of stuff like stream Netflix, along with HD video chat. The Logitech Revue will sell for $450. ($300 for the Revue, $150 for the camera accessory.) No monthly fee, that I am aware of, at least not for video chat. No glyphs, either. Revue is French for “review.”

I might be missing something but to me it looks like my employer has missed the ball really really badly here.

Yesterday after 4:45pm I was hustling toward San Bruno Caltrain to catch the 4:52. I hadn’t figured I would make it at first but as I got closer to the station I realized I could totally catch that train so I stepped up the pace. I hustled through an intersection, studying the cars to ensure it was safe. Then my mind went somewhere else for a moment, like I was dreaming, and I found myself on the sidewalk.

There was blood on my hand. Must have cut my hand.

I fell down? Really? Okay. Must have tripped on that curb.

I was in a daze. I answered by swearing a little bit. I got up. I figured out the blood on my hand was coming from somewhere else. My face.

Stitches? I should do that instead of catching the train. “So, I should call an ambulance to take me to the ER?”

“Don’t do that. They’ll charge you a lot of money.”

“There’s a Kaiser in South City. I could give you a ride. Would you like a ride?”

I didn’t want to impose and I was apologetic over the possibility of bleeding in the lady’s white Camaro. The guy in the red pickup truck thanked her for offering me a ride.

“That one doesn’t have an ER. It is just Dermatology and stuff.”

She explained which bus I could take back to Caltrain. I said I’d call my sweetheart to pick me up. We made small talk: jobs, where we’re from, and that neither of was “missing” the World Series. She offered to stick around long enough to see if I would be admitted. Then she conceded that there was no doubt I would be admitted. I thanked her profusely.

The lady put a band on my arm right through her teller window. I was buzzed past the waiting area to the triage nurse, who handed me a clean gauze pad and took my blood pressure. I was sent to wait a little while, and I was pleased to find my cell phone undamaged. I messaged Mei the situation, as I wasn’t sure if cell phones were all that acceptable in the ER. A nice lady cleaned out my wound and Dr Han stitched me up.

“Did you lose consciousness?”

My answer evolved from “I don’t know . . . I don’t think so” to “I must have, because I don’t remember falling, just the getting up. I’m really dazed.”

The standard for a concussion would be a brain scan, but given my youth and health, this would likely be a waste of radiation. In the car Mei explained that if I had fallen due to a seizure or something, that would be a big concern. I explained that I must have tripped on the curb, looking out for cars instead of the sidewalk, and I had been walking too fast to correct a stumble, which I am otherwise darn good at.

I marveled at the speed with which they had looked after me, that I had gotten the “express treatment” and the ER staff explained that this was because I had come in injured. “I’ll remember that for next time.” They charged me $35. I paid cash. I was happy, and grateful that I wasn’t in for worse.

On the way home I remarked to Mei that when I’d see the drawers labelled “rape information” in the various languages I felt badly about the things that happen to people, and I recalled the sad stories that Mei has brought home with her. “That’s why I have to unload,” she said.

“My life is mostly free from terrible burdens, so I’m happy to listen. I really respect you for the work that you do.”

She put me to bed early. This confused the cat, who started giving me the “breakfast call” around midnight, until Mei fed her around 8am, finally silencing our defective alarm clock. “It is probably just as well,” Mei explained, that the-cat-who-loves-breakfast was performing “neuro checks” on me to ensure that I wasn’t the worse for wear after my bump-on-the-noggin.

Our cat Maggie had been to veterinary Urgent Care just the day before. It turns out she had an asthma attack. Poor girl.

Last night I held Maggie as Mei examined her with a stethoscope. Maggie isn’t big on being held, but I think after her latest trip to the vet maybe she has established causality between feeling bad, going to the vet, being examined, and feeling better. Mei thinks that she has learned “stethoscope and being scruffed means hold still good kitty.”

Anyway, Maggie was huffing a bit, as she runs through the course of her asthma treatment, but it wasn’t bad enough to head in to the veterinarian.

We watched Community and SNL from last Saturday. The Weekend Update was hilarious. The Rent is Too Damn High, then a Ferkle is a Fat Erkle. “After you’ve had one you ask yourself: ‘did I do that?!'” I also enjoyed the description of “a coked-up gay candyland.”

Obama on Jon Stewart . . . Stewart could have I don’t know, asked him a few questions maybe like “you want to go through Congress? Really? A court fulfils your campaign promise to end Don’t Ask Don’t Tell and you gotta file an appeal? Could you explain that?” I think Obama handled himself well, and maybe reminded some progressive youths to schlep down to the polls and vote.

Speaking of which, I haven’t received a registration card or voter information . . . well, I got a thing from New York City explaining the issues there. I’ll tell you what the issue is in New York City: The Rent is Too Damn High. As for California I’ll figure it out and provisional ballot if I have to.