Week one in New York City has been good. We’re still unpacking . . . or at least, I am still unpacking. M had some coworkers help unload the truck. She stayed in the truck to help shift things around and guard against passing kleptomaniacs. I was good and exhausted as she excitedly tore open boxes and began stuffing things in closets. On Monday I went up to the Manhattan office — it is a half hour by subway. I like the place but as the week flowed along I found it preferable to work from home, emptying a couple boxes most evenings, making frustratingly-slow-to-M but measurable progress. 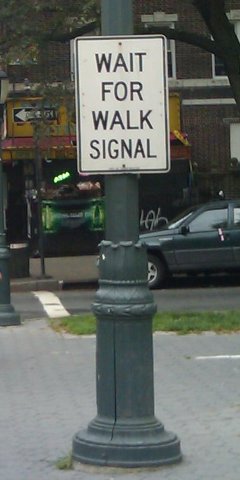 One big challenge is that I’m moving from a beautifully large kitchen chock full of cabinets and counter space into something well under half that size, and M has plenty of kitchen stuff as well. I take it as an interesting challenge to jigsaw everything into place in a logical, useful fashion, with every day items reachable by a woman whose height is emphatically to one side of the bell curve. As with any merger, there are redundancies to be reconciled by downsizing. Fortunately, those items left on the curb will readily find new employment in the brisk sidewalk economy of Brooklyn.

Near the end of the week I could tell I was feeling under-socialized. To be sure, I don’t require much social interaction, but even a computer geek in a new town needs some face time. Fortunately, my cousin the Actor / Tour Guide was by for lunch on Friday, and today I had lunch with a college friend, who although he grew up a nice Midwestern boy, has lived in New York long enough to have fully embraced at least the ambitious gusto of the city. “You can’t go about it by trying to save money here: you just keep striving and make more money,” he explains. Alas, he is a recruiter coming in on Saturdays to fix the office IT, and he has taken two pay cuts. But he’s excited that his novel is nearly ready.

Compared to the San Francisco Bay Area, where even a drywall contractor will show you his iPhone and talk about his cousin who works at eBay, New York City is not so tech savvy. When I went to sign the lease, the stereotypically Very Nice Older Brooklyn Jewish Lady seemed astonished at the idea that one could use the Internet to direct one’s bank to pay bills on their behalf. When she asked “what outfit are you with?” I answered and she was excited that I worked for the butchers! I’m pretty sure she had “the other Cisco” in mind but it was a refreshing surprise.

Another frustration is that our newly-renovated apartment has been renovated on the cheap, so various bits need to be fixed, while the “super” is busy managing the renovation of all the other units. (We are the fourth apartment occupied, out of about sixteen.) I won’t get in to too much griping detail, except to say that at one point the cable installers were here and frustrated at the truly horrible and mysterious site-wiring. (No, really, it is truly horrible. They had some nice wiring running to the units which they had cut off and replaced with cheaper coax that has apparently been terminated using a hammer and a pipe-wrench, and of course none of it is labeled.) The cable installer had his manager come in and I called the management company and at one point I had the grouchy guy at the management company and the field technician shouting at each other over the phone. Anyway, no cable until the site wiring is resolved: I’m going to sweet-talk the management company to get their inept contractor out here to label and signal test their drop-downs.

New York does not, to my knowledge, have a NextBus service, like San Francisco. From what I have seen, there’s not much need for it, since everything here operates reliably at all hours with fairly frequent service. It would be nice, for the power user, to know the status of complementary incoming trains on different platforms, but really I have had no problems getting where I am going. All the same, I’m glad Google Maps got transit directions into the Android application before I moved here. There’s also a little application that just shows you the subway map, and lets you zoom and pan around. Instead of looking like a tourist you’re just another douchebag playing with a trendy, overpriced toy.