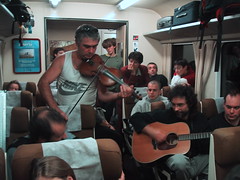 When I rode Talgo, there was a delay.

On Friday, Wisconsin Gov. Jim Doyle announced that 2 or 4 Talgo trainsets would be purchased for Amtrak’s Hiawatha service between Chicago and Milwaukee. Apparently, these will be Talgo XXI trainsets which have run at a top speed of 159 MPH, yielding a speed record claim for diesel train travel.

High Speed Rail? Yes, we can!

I rode an older Talgo in Spain, which was delayed due to a fire on the tracks ahead of us. They passed out soft drinks as we sat, and the Spaniards began playing music.