It is fun to see how people change over time, and how they stay the same. A decade ago I wrote a “Computer Literacy Narrative” for an English class:

The Internet continues to play a very big part in my life. My web site grows slowly every week. I keep my diary on-line for others to read. I write CGI applications. Iâ€™m a hard-core Unix geek, administering two of my own systems, writing my HTML and perl scripts in vi, wowwing friends with afterstep. I work for the networking group at NCSA, for the CSIL as a labsitter, and worked last summer at an ISP in Chicago called EnterAct, where I may very well return this summer.

My fanatical Unix snobbery does mean that I know very little about Windows 95 or Mac. Because I have good computer karma, I still tend to negotiate such systems better than the average Joe, but Iâ€™m by no means a wiz. Instead I enjoy spending my time tinkering with completely open systems like FreeBSD. I am proud and inspired by the idea that there are now several very competent Operating Systems available even for normal users that are built and maintained entirely by volunteer effort. It is my goal to continue to learn and ultimately contribute to this effort as I can.

The other day I was filling out a form that required my phone number. I thought for a moment and provided a phone number. Unfortunately, not everyone is in on the joke, as I just received this inquiry via e-mail:

I’m sorry, Kevin. Though I can only imagine that Kevin knows what he is doing.

I had a rough go of it until I found BlackNight’s post, and now my Canon i250 printer works with Ubuntu like a charm. I thought I would recap here for those who, like me, at first Googled in vain. If you paste these command into Ubuntu 7.10 (Feisty) things ought to work:

Now, this paste just might set up everything you need:

Then, go set up your printer in the GUI, and specify this PPD file:

(Or, in retrospect, since it has a GNU license on it, you could just download the PPD directly off my web site.)

If things turn out less-than-straightforward, definitely review BlackNight’s page for details, and if this does work out for you drop him a thank you note in the comments! 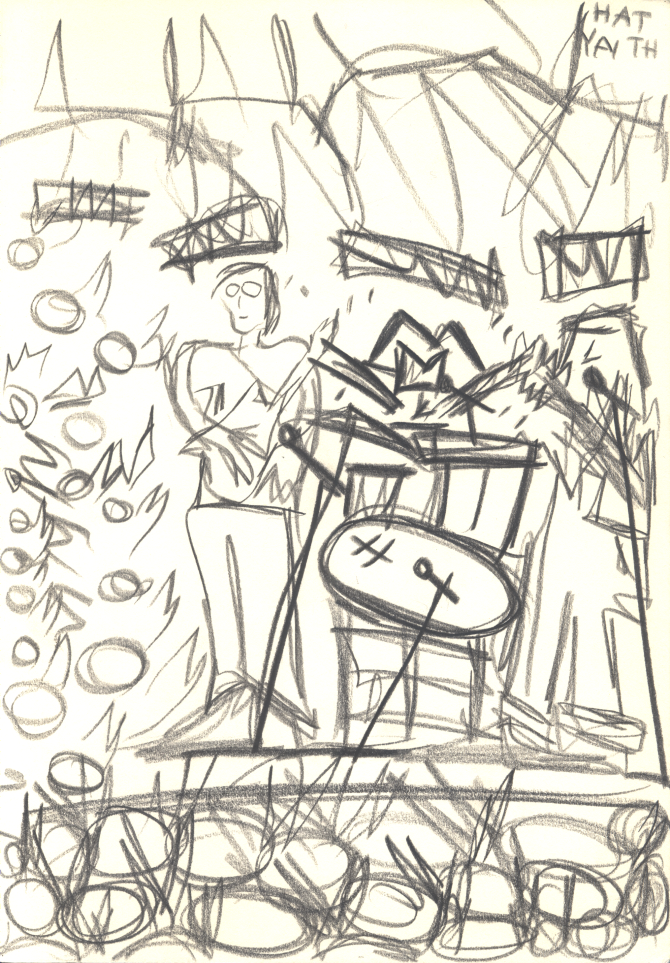 I spent Christmas, 2002 in Hat Yai, Thailand. Most nights I was at The Post, where a Red Hot Chili Peppers cover band jammed. This sketch reminds me of those days.

Overheard on Taraval, in front of the Safeway at 17th Ave:

“I’m literally serious: I coughed up my lungs.”

Tuesday morning Barack Obama delivered a powerful speech in Philadelphia about the need to talk openly and honestly about America’s racial troubles, and the need of all Americans to unite and focus on real issues and not get caught up in the usual crud of divisive politics.

The gist of it is that America started with a serious problem: slavery, and America has been moving away from that problem for a long time, but problems of racism and the legacies of inequality have left scars that one can still feel today. Sometimes black folk express anger and frustration at injustices and the slow pace of progress, and sometimes white people express frustration and offense at the idea that they should have to work to repair the damage wrought by generations past, when they have plenty of their own difficulties to focus on.

And all too often, politicians exploit these frustrations to set Americans against each other and distract them from working together on the real challenges that we collectively face. If we want change, we can not pretend that these divisions do not exist: we must acknowledge them, openly and honestly. We must remember that they can be a distraction from important work. We must reach out to one another and work together on the more important common concerns that unite us: education, health, defense, climate instability.

Here’s a link to a high-quality video from the campaign without the CNN ticker:

Budget 40 minutes. Or you can read the text.

America is fortunate this year: in Hillary Clinton, Barack Obama, and John McCain we have a diversity of candidates whom we actually admire. I’m supporting Barack Obama. 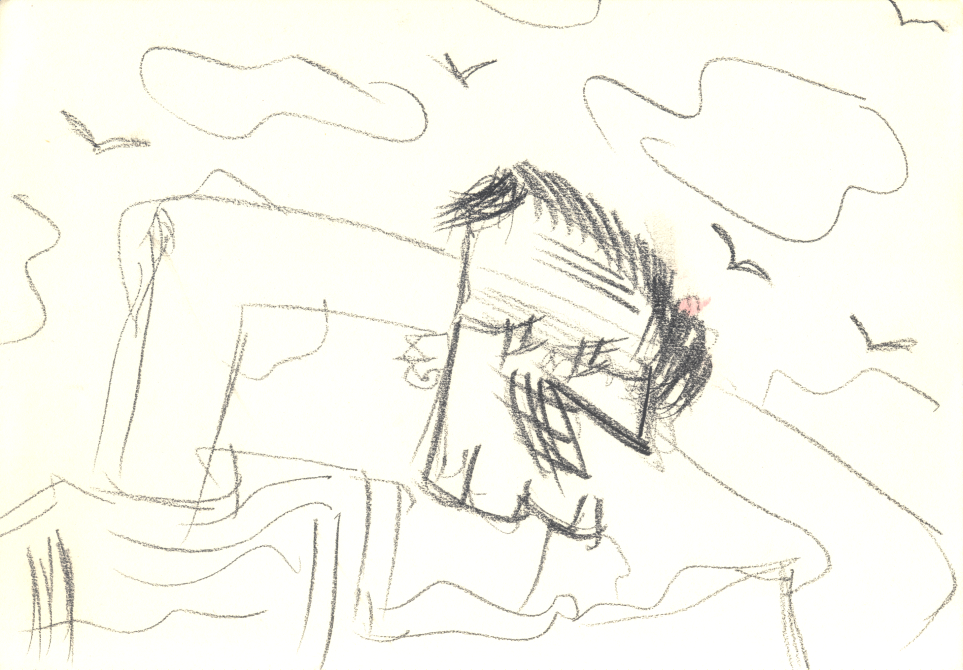 Arms outstretched, birds in a sky. This is a crude sketch, but I enjoy the care-free emotion it conveys. 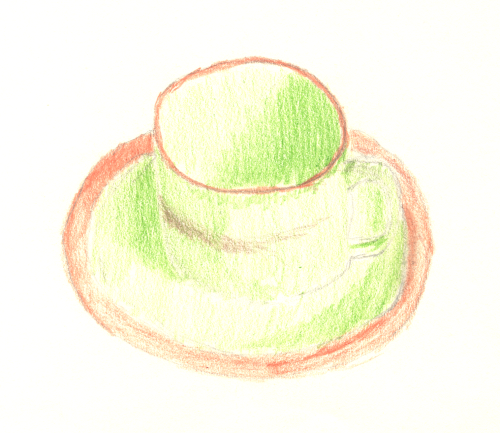 I was in a Danish cafe in Kata, Thailand. Good coffee and pastries: what more could I ask? So, I started doodling, or sketching . . . or, here, shading.

While women are the more frequent victims of domestic violence, men can be victims too. Whatever your gender, it is good to keep an eye on things. If you are dating someone and your partner seems a bit psycho, you may be entering a situation of “dating violence”. Wikipedia has a good starting point, with a list (adapted from ACADV) of early warning signs of dating violence:

There’s plenty of material online, and the CDC has a teen-oriented web-site called ChooseRespect.org.

An abusive relationship can creep up you. Victims tend to accept abusive relationships out of a combination of low self-esteem and a degree of ignorance about the dynamics of abuse. The Getting Past Your Past blog has a great article explaining “The Abusive and Semi-Abusive Relationship” . . . she twice features this warning in bold type:

The most lethal time for an abused person is when they are trying to leave the abuser. Have a plan and get back up! The news is full of (seemingly) nice people whose partner was trying to leave and ended up dead. When in a domestically abusive situation, use universal precautions and assume anyone has the propensity for violence.

As far as I can find anywhere, the best and seemingly sole advice regarding how to handle domestic violence is to leave. To this end, there is a National Domestic Violence Hotline: 1-800-799-SAFE (7233)

If you are preparing to resolve an abusive situation, the American Bar Association offers a Domestic Violence Safety Plan. It is a bit scary to read, but better to consider such things before you actually live them!

“So you don’t approve of getting even — of taking revenge for something that was done to you?”

“Revenge does not alter what was done to you. Neither does forgiveness. Revenge and forgiveness are irrelevant.”

“Forget,” said Borges. “That is all you can do. When something bad is done to me, I pretend that it happened a long time ago, to someone else.”

“More or less.” He showed his yellow teeth. “Less rather than more.”

Talking about the futility of revenge, he reached and his hands trembled with a new subject, but a related one, the Second World War.

“When I was in Germany just after the war,” he said, “I never heard a word spoken against Hitler. In Berlin, the Germans said to me” — now he spoke in German — “‘Well, what do you think of our ruins?’ The Germans like to be pitied — isn’t that horrible? They showed me their ruins. They wanted me to pity them. But why should I indulge them? I said” — he uttered the sentence in German — “‘I have seen London.'”

Revenge has its appeal, but I don’t think it helps. We use the expression “forgive and forget” but the concern is that certain things should not be forgotten. I figure it is better to forget than to have difficulty stuck in your heart. I think I’d say “forgive, if you can, draw a lesson from the memory, and then move on.”

Try to remember the circumstances and what happened, and that you felt a certain pain and whatnot, perhaps with great intensity. The pain itself, the “pain memory” I would leave behind, if you can. We are fools to forget, but we are foolish too to react in the present to pain from the past. 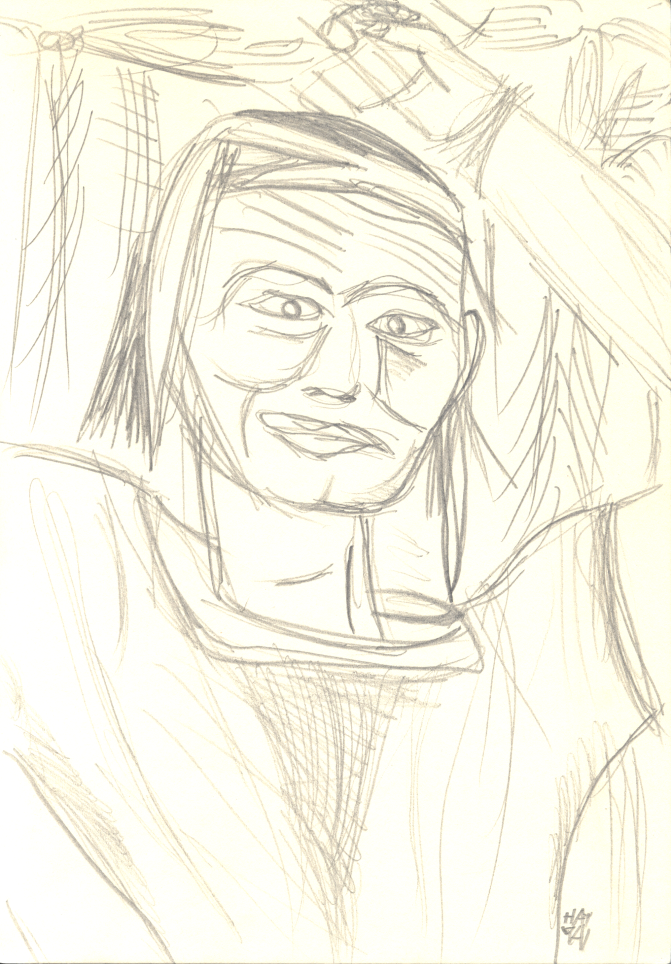 Inspired by too march partying at the Post, in Hat Yai, Thailand.

I think this Olympic year is a great occasion both to celebrate China as a great nation and also to protest the Chinese government for any number of serious grievances. But . . . I am hearing that pro-Tibet protesters are trying to extinguish the torch in London and Paris.

That is not cool. To me, it makes the protesters sound like a radical fringe group who would rather spoil the party for the entire world, and it makes the implausible anti-Tibetan propaganda from China’s government sound . . . less implausible.

The Dalai Llama’s non-violent approach toward the struggle gains the Tibetans a lot of international credibility. It must be impossibly frustrating for the Tibetan people to struggle against the Chinese occupation. The passions that are driving these folks are understandably extremely powerful, and I’m not surprised at the reaction. But I am disappointed, and I hope they can coordinate to protest the Chinese in a more compelling manner that kindles rather than douses the sympathies of the world’s people.

Today was a special election for my congressional district. It was an open primary for Congress–two Democrats, two Republicans, and a Green. I voted for the Green candidate in part because he is the only one who sent any campaign literature, and because this is a safely gerrymandered Democrat district anyway.

I was the first citizen of my precinct to try the electronic ballot. To explain the touch screen, the staff boasted “it’s just like an iPhone!” I dug around in English and Chinese and explored the “large print” zoom feature, then I had to ask how one actually casts the ballot. (The user interface places commands on the bottom of the screen, but the “review screen” had a big box in the middle that said “press here to review your paper ballot” and below that the standard “review” button to review the electronic ballot . . . I kept pressing the little button, until the guy showed me that the big box in the middle is also a button.)

I was pleased at the paper trail. On my way out, I noted that the optical scanner had counted three ballots thus far, so this morning’s exit poll is running at least 25% Green. 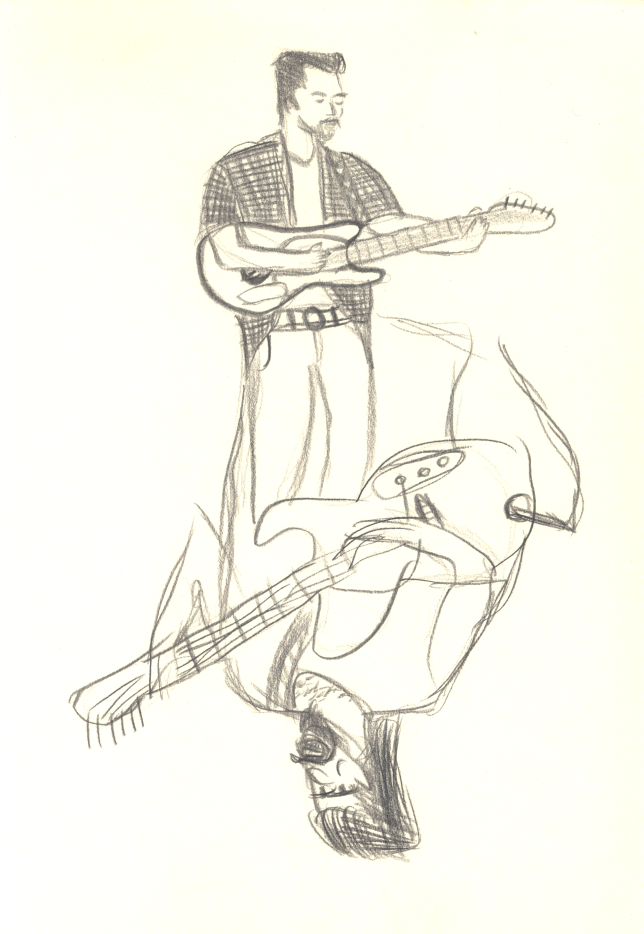 I tried to sketch the guitar player. Then I got frustrated and excited, flipped the paper, and did a more “impressionistic” style. Another from The Post, in Hat Yai, Thailand. 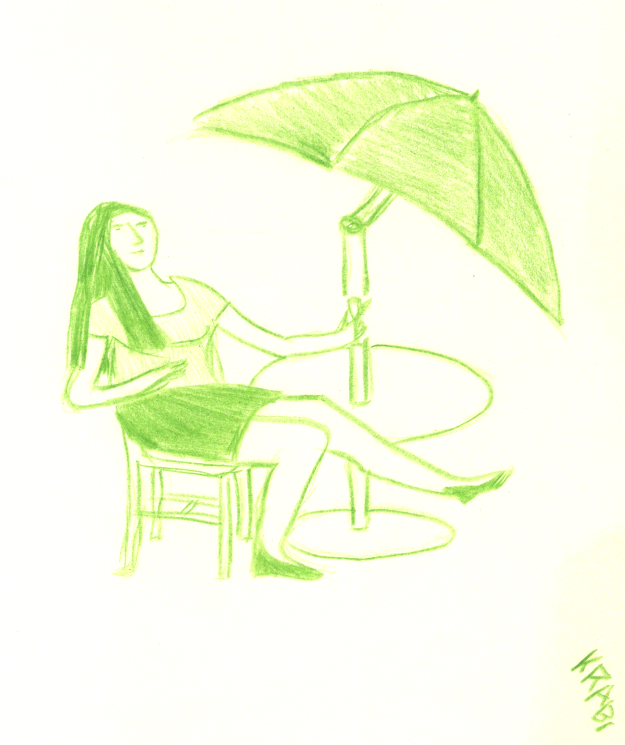 Just your average green woman, sitting under an umbrella.