“I pledge allegiance, to the flag, of the United States of America. And to the Republic, for which it stands, one nation, indivisible, with Liberty and Justice for All.” 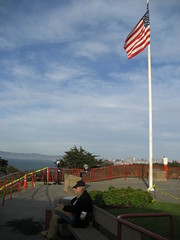 Some time in grammar school I figured there was something wrong with an Atheist pledging allegiance “under God” and after some time I came to pause when we would recite those two words. “one nation . . . indivisible.”

Paul Burd asks “do you remember the words to the Pledge of Allegiance?”

I am overly aware of the words. I responded:

I can recite the Pledge of Allegiance no problem. But as a devout Atheist and an honest patriot I skip the Joseph McCarthy “under God” feature because it is sacrilegious to make false professions, and dangerously reckless to claim holy sanction for the State.

So, hereâ€™s to Independence from Tyranny and state-sanctioned religion!!