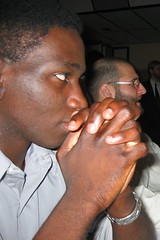 Tunji was a friend of mine back at Allen Hall. He came to school from Nigeria when he was sixteen, so he was always younger than everyone else. He never lost his deep accent or dark sense of humor. A one-of-a-kind kid who liked to play chess online and was studying to become a Doctor. I don’t know if he made his MD or not . . .

Tim notified us that Tunji’s body was found in Lake Shelbyville Friday. It sounds like he fell off a boat and wasn’t recovered for fifteen minutes, by which time the CPR could do nothing for him.

Last time I saw Tunji he just happened to be passing by when he saw me getting arrested by the University Police.

Tunji was truly a one-of-a-kind man, whose uniqueness was only magnified by his distinctive accent. I never met his family, but I can only imagine how hard it is for your intelligent son and future doctor to die suddenly, and far from home. . . I have great sorrow for his kin.

I will update with additional information or reaction as I learn more . . .

Tim Skirvin: His parents live in Chicago, not Nigeria

“They had been out there all afternoon and were there into the evening. Apparently (Mr. Toogun) had been in the water in the afternoon with a life belt on. At this time, he was on the boat with friends and lost his balance and fell into the water,” Green said.

Contrary to earlier reported information, friends noticed immediately that he fell in.

“We noticed after a few seconds that Tunji did not surface and immediately six or seven of us dived in to attempt to find him. It was not until 15 to 20 minutes later that we did,” said fellow student and friend Lauren Jakubowski in an e-mail to The News-Gazette.